The Swiss investigator looking into claims of secret CIA prisons in Europe has said that people were apparently abducted and transferred between countries.

Dick Marty told the Council of Europe on Tuesday that he deplored the fact that "no information or explanations" were provided by the United States government.

"Legal proceedings in progress in certain countries seemed to indicate that individuals had been abducted and transferred to other countries without respect for any legal standards," the Swiss senator said, while presenting his findings in Paris.

As current chairman of the Council's legal affairs committee, Marty has been empowered to head the investigation by the human rights body.

He is investigating claims that the Central Intelligence Agency transferred prisoners through European airports to secret detention centres, actions that would breach the human rights principles of the Council's member states.

Poland and Romania have been identified by the New York-based Human Rights Watch as sites of possible CIA secret prisons, but both countries have repeatedly denied any involvement.

Alleged existence of secret detention centres in Council of Europe member states:
Statement by Dick Marty, Rapporteur of the Committee on Legal Affairs and Human Rights STRASBOURG, France Dec. 13 -- At the meeting of the Parliamentary Assembly of the Council of Europe's (PACE) Committee on Legal Affairs and Human Rights held in Paris today, the rapporteur and Chair of the Committee, Dick Marty, reported on the key aspects of his inquiry regarding the alleged existence of secret detention centres in Council of Europe member states and flights which may have transferred prisoners without any judicial involvement.

He said the following steps had been taken:

The rapporteur welcomed the opening by the Secretary General of the Council of Europe of the procedure under Article 52 of the European Convention on Human Rights for the purpose of obtaining relevant information from all contracting parties to the convention.

From a general point of view, the rapporteur underlined that the information gathered to date reinforced the credibility of the allegations concerning the transfer and temporary detention of individuals, without any judicial involvement, in European countries.

Legal proceedings in progress in certain countries seemed to indicate that individuals had been abducted and transferred to other countries without respect for any legal standards. It had to be noted that the allegations had never been formally denied by the United States. The rapporteur takes note of the situation and deplores the fact that no information or explanations had been provided on this point by Ms Rice during her visit to Europe.

The rapporteur urges all member governments to commit themselves fully to establishing the truth about flights over their territories in recent years by aeroplanes carrying individuals arrested and detained without any judicial involvement. The Rapporteur intends to ask the leaders of the parlementary delegations to the Assembly to take initiatives within their parliaments in order to obtain more precise information on this matter, either by putting questions to their governments or by proposing the setting up of committees of enquiry. In fact, the delegations to the Parliamentary Assembly can make use of their unique position to lobby national parliaments to shed light on the matter. Mr Marty welcomes the fact that steps have already been taken here by certain national parliaments.

While it was still too early to assert that there had been any involvement or complicity of member states in illegal actions, the seriousness of the allegations and the consistency of the information gathered to date justified the continuation of an in-depth inquiry. If the allegations proved correct, the member states would stand accused of having seriously breached their human rights obligations to the Council of Europe.

In this connection, the rapporteur underlined that, although contacts between secret services were entirely normal and even necessary in the fight against terrorism, it was important for governments to exercise proper supervision over them (see here the detailed principles set out by the Assembly in Recommendation 1402 (1999) on control of internal security services in Council of Europe member states).

Dick Marty stressed that the aim of the Parliamentary Assembly, as the Council of Europe's political/parliamentary organ, was not to condemn individual countries or seek to impose penalties but to defend the values shared by the member states and combat terrorism resolutely and thoroughly, while, however, complying with the fundamental principles of states founded on the rule of law and the observance of human rights.

He announced that the Committee on Legal Affairs and Human Rights will ask the Bureau of the Assembly to include in the order of business of the next PACE's plenary session (23-27 January 2006) an urgent debate on the issue. 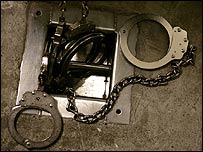 This story is just breaking, and the Greek media are pointing to a BBC report that I couldn't find on its site yet, but which is carried by the Times today ...

"Treason doth never prosper: what's the reason?
For if it prosper, none dare call it treason."

by Frank Schnittger - May 11
16 comments

by Frank Schnittger - May 11
16 comments