Mohammed Bouyeri [MB] was close to the Hofstad Group, and had prepared himself for a suicidal attack. He had written his will - last testament - stopped paying his monthly rent and utilities bills. MB was armed and expected to be killed in a police shootout, hoping to die in a glory of bullets. He possibly was unaware that the Dutch police officer is a poor markswoman and lacks training. So MB wasn't killed after the van Gogh killing, and now faces life sentencing after a 2-day trial in the special high security court building in Amsterdam.

Other causes to radicalize are the Palestinian oppression and Israeli occupation of their homeland, the Chechen war, and the high civilian casualty count in Iraq. If you invade a sovereign nation - you own it and all the consequences. Tony Blair and George Bush are responsible for the invasion and the lack of leadership for their nations and as presumed leaders of the free western world. Internet - Satellite TV - documentaries of the casualties in the Mid-East, Iraq and Chechnya are daily available throughout the western world.

Just today another 17 year old youth was arrested for acts of radical Islam, websites of hatred and publications.

Dutch society for years have not treated its Muslim citizens as equals, relying on extra legislation of anti-discrimination which of course does not guarantee equality in job opportunity. During decades of refusing to face reality, many Dutch cabinets produced a flow of policy notes but missed reality and directness to the individual Muslim citizens. A poor or lacking Immigration policy, as a major source the racial issue worsened to a degree only hard medicine will resort some effect. 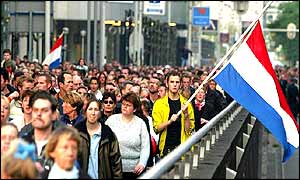 The  Paradox of Pim Fortuyn

The person credited with attacking the Dutch Integration illusion was Pim Fortuyn who made a sweeping entry into Dutch politics. In March 2002 his affiliated party gained a third of the council seats in the city of Rotterdam. Just days before the national election, Pim Fortuyn was executed by an attack of a lone gunman, an animal liberation radical Van de Graaf. The party Fortuyn led gained an unprecedented number of seats in Dutch parliament 28 out of a total of 150 seats. All parties part of the reigning purple coalition lost heavily.

Many individuals have been arrested and taken to court. A conviction has been extremely difficult due to fact a crime has not yet been committed and most of the evidence is obtained by the Secret Service, not an official investigation by the Dutch Justice officers. Much evidence cannot be made public in court, nor can Dutch secret service agents risk to give public evidence and blow their cover. A stage of preparation or planning a crime is not sufficient for a conviction, therefore Dutch law has been changed to make it unlawful to be part of a criminal organization. The Human Rights groups have attacked aspects of the new legislation, due to infringement of individual rights. See also today's meeting of EU ministers in Brussel.

So, the Dutch administration has to be satisfied by dispersing the groups, tracking individuals and keep close watch 24 hours per day on all suspected extreme Islamists. A number of Arab nationals, performing duties as Islam scholar in Dutch mosques have been denied residence permission.

There are two mosgues with radical Islam culture in The Netherlands: El Tawheed in Amsterdam and Al-Furqaan Mosque in Eindhoven.

A tough fight to win against extremism and potential terror attacks.

Videos showing beheadings and stonings found in home - US asked to help investigate 87 email addresses in killer's possession. Sixty separate documents were found on the computer of Mohammed Bouyeri [MB], a total of 500Gb. He himself searched the Internet for fundamental Islamic teachings. Apparently not fluent in the Arabic language, MB mainly searched the sites of the English in order to translate the teachings into the Dutch language. MB used to be employed as a social worker in a community organisation as was seen as a pleasant and dedicated person.

Later he was out of employment, received welfare benefit from the city of Amsterdam and showed increased anger to Dutch society. In his writings he clearly blamed the Dutch government and its peolple for the support of the US War on Terror, in the opinion of MB a War against Islam. After singular threats towards local city council members, he focused on the blasphemy of the profet Mohammed and the film "Submission" produced by Theo van Gogh.

In the Netherlands it has surprised me how the youths, Dutch born are converted to radical Islam movement. After the 9/11 attacks on NY and DC, there were a few towns in The Netherlands where Muslim youths cheered in public on the streets. The Dutch purple administration at the time, did not take it as a serious omen.

A lot of Saudi financial support involved in building Muslim communities and mosques. It is time the US makes a choice, and consider Saudi Arabia a terror state!

Speaking of terror source - the base lies on the holy soil of the Arabian peninsula. 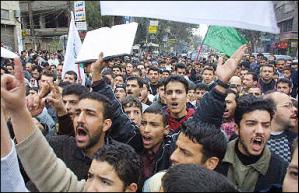