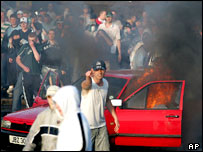 A LEXICON OF VIOLENCE

Basically everyone is out for a "good time" unless they are part of a solemn ceremony, and the gathering creates opportunity for violence, property destruction, blood, and few casualties.  When out of hand, the weapons include malotov cocktails, bottles, rocks, clubs, etc.  Usually no knives, unless wielded by street criminals, or guns, unless wielded by police.  When it's police they may use "friendly" fire like rubber bullets which can maim, blind or kill, or live ammunition.  Tear gas, beatings, and death in police custody are not unusual.

Riots happen whenever opposing parties or sides get together to do something else... like have a parade, go to the market, go to a sports match, or collect their unemployment.  Riots, unlike terrorist attacks, are always expected, which is why the police are so often involved in the violence.  In a large percentage of riots it is claimed that the police presence did not curb but instigated the violence.

A terrorist attack is a small battle in an undeclared or unofficial war.  The casualties can be as small as one or two people, and can be as high as 200 or 2,000.  There is always a political agenda, and, as in all wars, efforts at diplomacy, negotiation, or settlement have either been exhausted or have never been tried.  In the post-911 world, the leaders of the G8 countries are often quoted as saying, "Never negotiate with terrorists, it would be giving in to them."  Instead the world has been evolving along the lines of a police state under constant code orange alert in terror from an unknown enemy.

The Dawning of a New Age of Barbarity

When the Wall Street Journal journalist Daniel Pearl was abducted out of a restaurant in 2001 by a group of terrorists, they broadcast their demands over the internet, and other media.  They said they would kill Danny Pearl within 24 hours if 12 Pakistanis were not released from prison.  The terrorists waited far longer than 24 hours.  After 4 days they beheaded Daniel Pearl on the internet.  Thus, a new terrorist means was born: death by means of beheading on the Internet.  This has continued to work for those who use this modern medium for criminal barbarity that goes back to pre-history.  These are blood rites of a brutal age.  This is what Hannah Arendt wrote about in "Banality of Evil" when writing about Eichmann, and what Freud wrote about in 1931, "Civilization and Its Discontents,"  man becomes wolf to man.

". . . men are not gentle creatures, who want to be loved, who at the most can defend themselves if they are attacked; they are, on the contrary, creatures among whose instinctual endowments is to be reckoned a powerful share of aggressiveness. As a result, their neighbor is for them not only a potential helper or sexual object, but also someone who tempts them to satisfy their aggressiveness on him, to exploit his capacity for work without compensation, to use him sexually without his consent, to seize his possessions, to humiliate him, to cause him pain, to torture and to kill him. Homo homini lupus [man is wolf to man]. Who in the face of all his experience of life and of history, will have the courage to dispute this assertion?" (Sigmund Freud, Civilization and its Discontents, 1930)

After the September 11, 2001 terrorist attack on the World Trade Center towers, President Bush declared a war on terrorism.  He has been waging it ever since.  The October Declaration granted the President the powers to go after terrorists wherever they might be, and the countries that harbor them.  The problem is that terrorists live in every country in the world... and in that they are citizens of countries like Britain, the United States, Ireland, Morocco, Spain, France, Germany, Italy, China, and... well, the whole world, President Bush would have to make war on every country in the world to achieve his end.

The terrorists that most concern GW Bush are those who come from oil-rich nations.  In order to erradicate those terrorists, it is necessary to destroy the country that might harbor them, depose its leaders, take over their government, set up a new one, and continue to make war on that country even after the war is declared over.  Basically there is no end to this military action, because in the process of getting rid of terrorists, one has set the conditions for creating more terrorists than one could ever imagine.  It is like what is said of the prison system: it is a state-sponsored training camp for criminals.

These are soldiers in an undeclared war that resort to the most violent and expedient means... suicide bombers, bombing mosques and churches, bombing market-places (Israel, Omagh, etc.), bombing trains (Madrid, London)  In that their targets are most often innocent people, the terrorists are different from resistance fighters and violent revolutionaries whose targets are most often government officials, embassies, economic centers and other symbols of the concentrated power of governments.

The Lowest Level of Dante's Inferno

Then in the Dante's Inferno of terrorism, there is the lowest level of Hell, that is occupied by suicide bombers who target crowds of children, and snipers who target children.  These terrorists use car bombs and drive into crowds where children are gathered.  The worst two instances are September 30, 2004 - 37 children killed; and July 13, 2005 Baghdad - 24 to 32 children killed, 20 injured.  Sniper attacks on children going to school have been going on in the North of Ireland, and between Palestine and Israel for years.

The War On Children

(4 day old Miriam Jabber who was injured in a suicide bomb explosion in Baghdad, which killed at least 24 children on July 13, 2005; AP Photo)

It was said once that war is the insane proposition where you and I sit down and agree to kill one another's children.  That's the insanity of a declared war.  The death toll of children in modern warfare is insanity born out of insanity - imperialism, racism, religious hatred - genocidal ambition.

In today's world of modern warfare the terrorist wars are undeclared and unofficial.  Negotiation becomes impossible because it is a means of reconciliation born out of civilization.  Justice and not revenge is the course of civilized humanity.  War does not cultivate humanity... it destroys humanity.  The destruction of a people, the people's home country, and the people's culture, history and civilization in its built-up art, history, architecture... the impostion of sanctions by the occupying force stifle if not extinguish the very impulse towards creating peace.

THE WAR ON IRAQ IS ILLEGAL

The war on Iraq, and the continued occupation of Iraq is illegal, immoral, and cannot succeed in bringing stability or prosperity to the Iraqi people.  The continued occupation can only increase instability, continue what has become a Civil War, and continue to function as a breeding ground for further violence, bloodshed, and casualties to US/UK forces, to the Iraqi resistance, the civilian population - the elderly and infirm, to women, to children and to infants.  The war on Iraq has, over it's 15 year development, claimed the lives of as many as 1,000,000 people.

Who is left to create a world worth living in?
Who is left to work for democracy and freedom and a peaceful way of life?
Who is left to occupy rebuilt neighborhoods?
Who is left to negotiate between sides in the Civil War that is developing in Iraq?
Who would turn to the US & UK for diplomatic and humanitarian intervention?

This is the insanity of war: