.
DIARY WRITTEN ON CHIRAC - SCHREUDER - PUTIN VISIT AHEAD OF G8 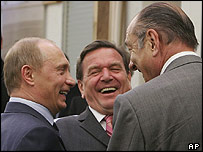 The three leaders
seemed to enjoy themselves in Kaliningrad

Ah, the old ones are the best ones. One can only pray to our merciful and loving God that Uncle Jacques refrains from regailling us with mother-in-law jokes.

.
Suggest Blair and Chirac share a room at Gleneagles, should not be a problem as with the cultural differences the two will never occupy the same M² during the 24-hour schedule in a day.

I'm certain the jokes would have been shared in the presence of TB as well. At least the comments were factual, no prejudice as source. Not only the shameful BSE mad cow disease, in addition the culling of sheep must have cost £bn of EU agricultural budget money that could have been invested in worthwhile projects. 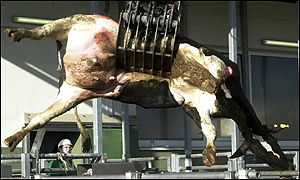 More below the fold »»

UK BSE cost the EU-15 more than €90 billion ($108bn)
BSE, that ravaged the UK beef industry in the early 1990s, cost the EU-15 more than €90 billion, a situation that Brussels is keen to avert a second time. The new budget, rising by some €41 million on 2004, for TSEs will aim to boost consumer confidence in Europe's beef industry to bring more revenue into the sector.

The UK beef industry is only now starting to recover from the outbreak that saw 37,000 clinical cases of BSE and about 60,000 of the highest risk animals entering the food supply, compared with less than one a year today.

Financial Times guide to Europe's beef business
FT Sept. 23, 1996 -- Shoppers are turning their noses up at all things beef, preferring to eat pork, chicken, fish or lamb. In the last six months, average beef consumption in the EU has fallen by 11 per cent. In Germany it has fallen by 30 per cent. The collapse in sales has driven prices down by between 13 per cent and 21 per cent compared with last year. A beef mountain of surplus stocks is expected to reach nearly 1m tonnes this year.

Why? People are scared. Panic set in late last March when a junior minister in the UK government announced in parliament that there was a possible link between bovine spongiform encephalopathy (BSE), more commonly known as mad cow disease, and a rare but fatal human brain disease, Creutzfeldt Jakob Disease (CJD). There is no conclusive proof the two are linked, but alarm bells sounded when British scientists identified a new strain of CJD. As of June this year, 11 people in Britain had died from it. The assumption is that BSE was the most likely cause.

1995 - Stephen Churchill, 19, becomes the first known victim of a new variant of Creutzfeld Jakobs disease (vCJD). At this stage government scientists reject a connection between vCJD and BSE.