I am only one; but still I am one. I cannot do everything, but still I can do something. I will not refuse to do the something I can do.  (Helen Keller (1880-1968)photo of Helen Keller) 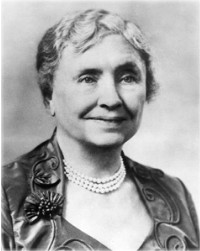 For the past four years there has not been a day gone by that I did not do something to try to end the war in Iraq, to try to relieve the suffering, to try and stop the criminal insanity.  Some four years ago the way I tried was to give 20% of my earnings to Medicins Sans Frontieres.  They broke through the embargo against Iraq.  They got food and medical supplies through. What did I do?  I wrote and I talked.  Gave speeches and talks and raised money.  And I wrote.  And today was no different.  I wrote.  I published.  But today I changed my ways.  I will not fight this war the way I have fought in the past.  I have a new way.  I am finding my way out of the dark towards the end of the war in Iraq.

Since then I am asking myself today, was there anything I didn't try?  Well, I didn't lay down on any runways to try and prevent warplanes from taking off.  I didn't disable any war machinery or cause any material damage.  I didn't do any violence.  I did some civil disobedience.  I marched and marched, one day twenty miles in a day.  I assembled anti-war materials for distribution.  I worked with groups and groups and groups.  I did secretarial, I fetched coffee.  I made lunch and washed dishes.  And I wrote.

What was driving my machine for all these years?  It was a hatred of war and a hatred of George Walker Bush.  Him and his whole cabinet which I see today like a many-headed Hydra.  Cut off one head, and another appears in its place.  I can't even begin to think about Gonzales as a Supreme Court Justice.  I can't do it.  Gonzales is the main author of the torture policies, the main facilitator for such horror camps as Guantanamo and Abu Ghraib.  Was the torture systemic, systematic and widespread?  Yes, it was US policy.  Gonzales wrote that policy.  He ordered Bybee to write that policy.

No sane person could think of Gonzales as a Supreme Court Justice.  It would break one's mind... to put Gonzales and Justice into one sentence... that is such a contradiction as to prove that Orwell saw it all.  We are living in the world of Newspeak.  It's just a matter of time before Big Brother (who apparently fell off his bike in Scotland today) has completed his mission.  We are all smiling benignly at evil.

Not me, boy.  The thing is all my strategies have not worked.  I had too much hate in me.  Too much anger.  Too much rage.  I was getting burnt out and exhausted and I was achieving nothing, just my ruined health, some articles, and a few really nice letters.  I knew I was wrong, but I couldn't figure out how.  Activism was the right thing.  Resistance was the right thing.  Sending money when one could and supporting others in the anti-war field was the right thing.  Then why didn't I feel right?

Two days ago that changed.  I had a day of peace.  I felt peaceful and slept peacefully.  For a day it was as if the war in Iraq had stopped for a cease-fire.  (peace-fire I called it)  And when I came to life again, after a deep sleep, I could see clearly how to change my ways.

"I am more interested these days in creating peace than in fighting those who created this war and want it to continue.  Exit strategy is most important... but creating peace is vast.... it is about healing.... and that's where I am going. Because my fight against the war in Iraq was a war, when it was not a battle, and I was becoming a used up pawn in the US resistance movement.  Now I am interested in strategies that create peace through reconciliation.... I'm going off to study peace, reconciliation and healing."  Diary July 5, 2005

Now, has anything changed really?  No, I will do everything I have done before, and maybe even more, now that I am not so likely to burn-out and knock myself out doing stuff that just doesn't work.  But fundamentally there has been a profound shift, and it is back to the childhood message I got from Dr. King about non-violence.

At the center of non-violence stands the principle of love.
- Martin Luther King, Jr.

Nonviolence means avoiding not only external physical violence but also internal violence of spirit. You not only refuse to shoot a man, but you refuse to hate him.
- Martin Luther King, Jr.

Here is some more that I am studying:

I think that people want peace so much that one of these days government had better get out of their way and let them have it.
- Dwight David Eisenhower

Every gun that is made, every warship launched, every rocket fired, signifies in the final sense a theft from those who hunger and are not fed, those who are cold and are not clothed.
- Dwight David Eisenhower

Peace is a daily, a weekly, a monthly process, gradually changing opinions, slowly eroding old barriers, quietly building new structures. And however undramatic the pursuit of peace, the pursuit must go on.
-- John F. Kennedy

The past is prophetic in that it asserts loudly that wars are poor chisels for carving out peaceful tomorrows.
- Martin Luther King, Jr

And the one I'll leave you with.  Can you believe that once there was a US President who said this?

"Mankind must put an end to war, or war will put an end to mankind...War will exist until that distant day when the conscientious objector enjoys the same reputation and prestige that the warrior does today." -- John F. Kennedy