The symbol of the day was to be something you may know from its American copy in Baghdad -- the toppling of Stalin's giant statue:

Below the fold, I shall recount the events of the day, when all the forces described in the previous episode began their fateful interplay.

Also in the comments: the riots on commemoration day that took the headlines from the official celebrations.

This diary is the second in a five-part series, whose parts cover:

The 1956 revolution didn't start in Budapest.

In the northeastern industrial city of Miskolc, the organising workers and students (see previous episode) joined, and brought their demands to the Party HQ in the late morning. At the same time, the students of major eastern city Debrecen (where the first deadly shots at protesters would be fired in the afternoon) also began their protest.

Trying to stem the tide, at 12:53, the leadership prohibited all protests. However, as in the meantime, the Petőfi Kör (a forum of the Party's reform wing, see last episode) swung behind the pro-Polish protest (again see last diary) called for by the newly formed independent student organisation (also in last diary), an unprecedented wave of protest notes hit the leadership, including from large parts of the Party itself. The protest ban had to be lifted.

And thus the events in Budapest could begin. The memory of the day focuses on four main events: the originally planned protest rally, Imre Nagy's speech from the balcony of Parliament, the toppling of the Stalin statue, and the battle for the state radio.

The protesters began their walk from the universities (below near the Economics University then named for Marx).

As they walked along the main roads, the masses swelled and swelled. 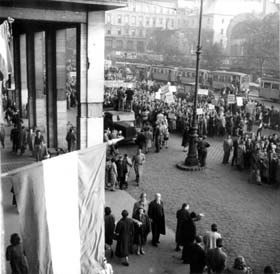 One stream made a stop at the statue of Sándor Petőfi, hero and martyr of the popular 1848-49 revolution, where a popular actor recited the fiery poem Petőfi wrote for that revolution. (Later this actor's popularity spared him of serious punishment, and he would get the chance for another such symbolic crime: in the film version of a historical novel, he would recite a passage from the book on national independence, even though it was deliberately left out of the script.)

Then around 15h, the now hundred-thousand-strong mass arrived at the statue of Józef Zachariasz Bem, a Polish revolutionary general who helped the Hungarian effort in 1848-49. 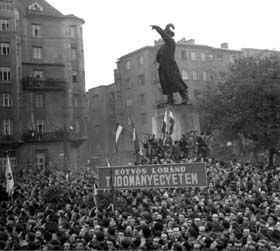 The protest organisers held their speeches: the students read their 16 points (see last diary), the writers had a Polish writer read his notice, the Petőfi Circle talked.

However, at this point, the rally became what Hungarian writer Péter Nádas describes as headless mass: there was no leader, there was no plan, but everyone realised that there is potential. The scale of the masses on the streets and what they could effect took everyone at unawares, including the Soviet army, despite having been on alert since the 19th.

There was an outbreak of freedom of opinion. Agitators of all kinds of ideologies roamed the crowd, reportedly including royalists, as well as anti-semitic far-righters, but found no response. Then as some had an idea of what to do next, suddenly hundreds started to move in this or that direction. The largest part of the mass started to walk towards the Parliament building.

By 18h, the crowd at Parliament numbered at least 200,000. (The total of the various groups walking across town is estimated at up to half a million, a third of the then population.) Dispersal by violence was out of question, and tricks like shutting down streetlights didn't work. The crowd then demanded that the illumination of the new red star atop the building (a replica of one on the Kremlin) be shut down, which was abided by. The crowd then decided to demand Imre Nagy, the popular leading reformist communist (see last diary). At 21h, earning great celebration, Nagy finally appeared on the balcony.

This moment is commonly remembered as a moment of glory, but what followed in real life was dissatisfaction on both sides.

Nagy would begin his speech with "Comrades!", to which thousands replied that "We are not comrades!". Then he attempted "My young friends," which was taken to be too paternalistic. He finally succeeded with "My fellow citizens!". But his speech, promising reforms and calling on people to go home, was uninspiring and/or badly amplified. And Nagy himself was taken aback, and wasn't sure whom he faced. (More in the next diary.)

The fall of the dead tyrant

Hungary's Stalinist dictator (who was finally removed by the Soviets the summer of that year) wanted to please Stalin in everything. One of his feats was to tear down a church and build a giant 6-ton statue of Stalin in its place. Although the personal cult was renounced by then, no one would order the statue's removal. So that became demand number 13 of the students.

From the Bem statue and from Parliament, groups of protesters headed straight to the monstrosity. But they faced a herculean feat. Like their American plagiarists in Baghdad, they used ever stronger makeshift tools, in the end even lorries and flame cutters. (You'll read an eyewitness account from a relative of mine in the Personal Memories extra diary.) They finally succeeded half past nine. The statue was then splashed with red paint, pulled along a main road in a triumph parade, then abandoned on a main square where it was cut up for souvenir, its remains lying there for days. 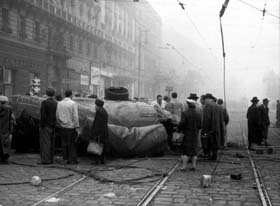 Revolutionaries atop the remaining boots of Stalin:

The battle for the radio

That events will take a bloody turn was to be guessed already in the afternoon: some groups of protesters (mostly young workers who knew where to find what) took aim at weapons factories, as well as police and military weapons storages. Soon armed young lads and girls would appear on the streets. And in the night, they got their first battle.

At 20h, while the mass rally before Parliament went on, then party leader Ernő Gerő, a Stalinist hardliner trying to hold on by paying lip service to Krushchevist reformism, held a speech on the state radio. He infuriated people by denouncing them as fascist counter-revolutionaries, while the radio carried no reports of the actual events. So one group went to the radio building, demanding that they at least broadcast the student's 16 points.

Although the building was guarded by soldiers and members of the dreaded ÁVH secret service, the commanders again feared the masses, and tried to thwart it with tricks. So they gave the crowd a car with a microphone, telling them their speeches will be aired. When the crowd realised they've been had, they used the car to break into the building.

Then, as often during major historical events, an escalation of misunderstandings began.

The radio leadership invited a delegation. Then the rumour spread that the delegation was arrested, and the crowd became outraged.

So the soldiers started to push the crowd from the place with bayonets mounted. But newly arriving reinforcements didn't knew, and their armoured carriers broke through their comrades' cordon.

As the crowd rushed forward across the holes, the soldiers fired in the air. But the ÁVH henchmen inside the building thought they are shot at, and began shooting low, hitting soldier and protester alike. This was around 21h.

Then soldiers began to change sides, while the workers with the pillaged guns arrived. The ÁVH guys were trapped in the building. Around 11h, gun battle broke out. It was very heavy, and lasted hours.

By the time the revolutionaries won in the morning, after more than a hundred dead, the building was ruined, and the radio personnel fled with some surviving equipment.

At the end of the day, it was not yet clear that the revolution won. The expected leader wasn't yet with them, the symbolic statue-toppling hit a dead dictator who already fell from favour, and even heavy battle failed to get them media access. And, upon an order by the Soviet defense minister, tanks were heading towards the capital.

How the day's gains could lead to a total upheaval, I shall describe in a week from now.

COVID19 and Energy: What McKinsey Thinks

The Joys of Spring

by Frank Schnittger - May 4
13 comments