Following up the huge wiretap scandal I've posted about previously (1, 2, 3): there are many developments most of which seem not to be widely reported outside of Greece. They are quite interesting because they include the confirmation of a murder, a possible Hollywood movie and a smoking gun that points towards the Fort Meade, MD, area.

From the front page (with title edit) - whataboutbob

So lets start with what has been reported. The Guardian, on April 10, wrote, recapping the situation as it stood then, that:


Vodafone faces harsh criticism this week from Greece's independent telephone watchdog for its role in an espionage scandal that has rocked the country.

In a report into the affair, the watchdog, known as ADAE, is expected to deliver a withering verdict on the mobile phone giant following the discovery of more eavesdropping devices lurking in the central system of its Greek subsidiary...

...The watchdog's findings follow what is widely considered to be an inadequate judicial inquiry, ordered by the ruling conservative New Democracy party a year ago when the illegal software was discovered after a barrage of customer complaints.

The scandal has reached the highest echelons, with the prime minister's chief of staff and executives of both Vodafone and its software supplier, Ericsson, being called to testify last week before a parliamentary committee investigating the taps.

The firms gave conflicting accounts of how a rogue bugging program came to be installed in the network. Ericsson's regional chief, Bill Zikou, said the Swedish-based company had openly provided Vodafone with software permitting legally sanctioned surveillance - a claim fiercely denied by the mobile operator, which insisted it was not informed of its existence...

...There were claims last week that while the Americans dismantled the devices after the Games, The Greek EYP intelligence service ordered the eavesdropping operation to be continued through Vodafone.

The death of Vodafone Greece's top technician, Costas Tsalikides, found hanged in his bathroom a day after the bugs were first detected last year, has fuelled charges of a cover-up. A colleague at the company has claimed that the 39-year-old unwittingly discovered the wiretaps and was about to go public. Solving the riddle over the apparent suicide is now seen as key to the whole spy mystery...

This is all quite accurate. But aside from ADAE, the ongoing investigation has released new evidence: We now know for a fact that Tsalikidis phone had been used one hour after his estimated time of death and an shortly before the family found his hanging body. This makes, I figure, the "suicide" scenario even more unlikely. The phone had been used the night before his death, at a time when the investigation has shown Tsalikidis was not in his house. For more information on Costas Tsalikidis, you might want to visit the site that his family and their lawyer have created, titled Why Costas? as a tribute to the man and as a vehicle for information they want to make public regarding the case and the murder, quite probably, of their loved one.

If this whole case sounds to you like a spy thriller, you're not alone. According to the Observer:


...After buffeting Athens for nearly four months, the seamy story of intrigue and espionage that has implicated the Greek government and portable phone operator Vodafone has been pinpointed by Hollywood for the big screen.

A leading US film company has dispatched scouts to the capital to see whether the film can be made in situ and whether any of the cast of characters are willing to be involved. These, so far, include Greece's Prime Minister, Costas Karamanlis, most of his cabinet, the heads of the armed forces, human rights groups, journalists and a host of Arab businessmen.

All share the same fate of having had their mobile phones monitored, by 'persons unknown', both before and after the 2004 Olympic Games. The unnamed film company believes the scandal has all the ingredients of a big spy thriller. The discovery of the illegal wiretaps, and the ruling conservatives' decision to go public, has provided a snapshot of the underhand methods of intelligence services rarely seen in the real world. 'They're calling it "Watergate, made in Greece",' says one insider.

If made, the movie would capture a period of extraordinary dealings for mobile giant Vodafone, whose Greek CEO, George Koronia, has been approached to participate. Greece's independent telecoms watchdog, ADAE, recently issued a withering verdict on Vodafone's role in the imbroglio, claiming the company not only concealed information but erased evidence of its own involvement by destroying the logs of staff visitors to at least one of its four bugged communication centres.

The article goes on to mention some of the new facts that ADAE's investigation has uncovered such as:

"...that the Vodafone mobile phones that intercepted the calls had received text messages from the UK, the USA, Australia and Sweden - an oblique reference to 'foreign secret services'."

But that's not all. What the article does not mention is that we now know where some of the calls from the "shadow phones" used in the wiretap were made to: Notably, there were 11 logged phone calls to Laurel Maryland, USA. Now take a look at the map below: Laurel is literally next door to Fort Meade, and that is a "startling" coincidence: Guess which US government agency is headquartered in Fort Mead... Yep, it's them: the most active warrantless wiretappers in the world... 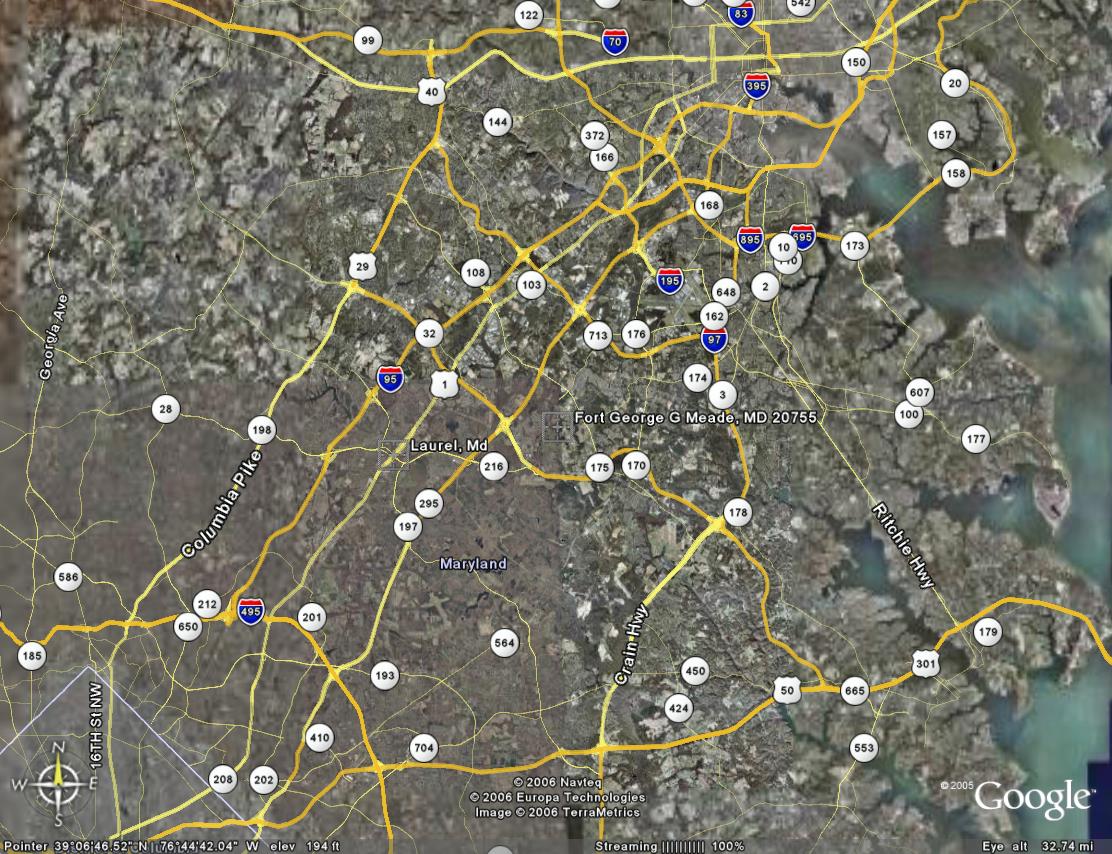 When they found out about it, the ADAE people pretty much peed their pants - after which they decided that the best course of action was doing absolutely nothing. I translate from the Greek business daily Imerisia [in Greek], reporting on ADAE's testimony before a Greek Parliament Committee:


"Answering the insistent questions of the MPs E. Venizelos [Socialist] and L. Kanelli [Communist], about whether ADAE made any attempts to discover who the US phone numbers belong to and whether they called these phone numbers, Mr. Lambrinopoulos [president of ADAE] was blunt:

"We thought about it, but we were afraid about where these phone numbers might lead us. The capabilities from over there are quite extensive. It's one thing if the phone numbers belonged to a private residence, but if they belonged to someone else, like a company or a service?" he asked, causing unease among the MPs.

"What scared you so much that you wouldn't even call 411 over there?" L. Kanelli insisted.

"Don't you understand that we can't compromise ourselves? It could be someone that shouldn't see the number calling. We can't risk it. It's not personal fear. Any action could have turned out undermining the investigation. What if there was somebody "difficult" on the other end?" Lambrinopoulos noted characteristically.

In a related point E. Venizelos claimed that "either  [the Greek Secret Service] EYP didn't understand / didn't want to follow this up or it understood perfectly what was happening and was ordered to tamper with the evidence", ADAE's president "left EYP on a limb, stating that they should have had found the card phones and the calls to the US."

Later, Mr. Lambrinopoulos would disavow the obvious, after being careful not to "undermine the investigation" by trivially confirming it:

In a statement yesterday, ADAE said that the calls to those four countries needed further investigation but added that there was no evidence to suggest foreign agencies had been involved in tapping some 100 phones.

The watchdog also said that it had no evidence to support claims that the calls made to the USA were actually made to the National Security Agency in Maryland.

The investigation is ongoing, but let me tell you something about this story: If the NSA can be shown to have been heavily involved in these wiretaps, and if Tsalikidis was indeed murdered as part of the cover-up - hypotheticals that are not by any means far-fetched - then a US agency is connected - directly or indirectly - with the murder of a citizen of an allied country, a man whose only crime it seems was his professional diligence, and Vodafone, Ericsson and the Greek government by their inaction or collusion, were accomplices and/or physical perpetrators. And  thus this story will never reach the courts, I wager, because someone most excruciatingly "difficult" is, indeed, on the other end of that line...