The Day After: Mexico's Electoral Chaos

After Mexico's Federal Electoral Institute (IFE) vote count, the IFE declared Felipe Calderón the top vote-getter in what is seen as the tightest presidential election in Mexico's history.

What seemed to be a López Obrador victory on July 5, was nothing but an illusion. During the hard count, which López Obrador enjoyed a lead all day, AMLO saw his lead fall to under 0.5 percentage points after 94% of the votes were counted, AMLO with 35.84%, while Felipe Calderon was at 35.35%.

López Obrador, his supporters, the 2.5 million voters who were thrown out, and many others have publicly questioned the results. That day, López Obrador announced he will challenge the vote count in the Electoral Tribunal.

López Obrador demanded that electoral officials carry out a manual ballot-by-ballot count, instead of just tallying vote totals as they have been doing.

But Luis Carlos Ugalde, president of the Federal Electoral Institute, said that was not possible.

"Mexican law is very clear on when a ballot box can be opened: only when there are problems with the vote tallies, when the tally sheet has obviously been changed, or when the box has been tampered with," Ugalde said.

The close race has opened up doubts about the legitimacy of the winner and this is the one scenario that the IFE hoped to avoid. Unlike here in the United States, when legitimacy is questioned it can lead to mass protests with the claim that the public's will has been violated. Another scenario that the IFE was hoping to avoid. Unfortunately, it will soon become IFE's nightmare. Soon after IFE announcement, López Obrador called on his supporters to rally in Mexico City's vast central square.

Andres Manuel Lopez Obrador, who has a history of mobilizing millions, had called on his supporters to turn out Saturday in the capital.

Mexico is a literal powder keg ready to explode and this is raising fears that Saturday's protests will lead to unrest. If those who manipulated the election figured the Mexican people were going to act apathetically as their American counter-part, they better think again. According to CNN, there are already scattered protests through out Mexico, the day before the mass rally, "including one in front of the Federal Electoral Institute". Once López Obrador raised concern of election fraud, that was enough set off a chain reaction in a country already known for its corruption and a history of electoral fraud.

Mass rallies are now called throughout Mexico. Frustrated coalitions groups, the telephone workers union, the national workers union among others are urging for people to join in civil resistance to defend the "legality of the vote."

Calderón may callously try to quell the rising fears, especially among his base and offer an olive branch to ALMO, but it is the other side is not buying false peace offering. They have seen this scenario before in 1988 when the newly formed PRD actually won the presidential elections and then have taken away from them when the computer system that was counting the vote "crashed".

The government installed a highly touted computerized vote tabulation system, offering to let opposition CFE representatives monitor it on election night. But one representative from PAN became frustrated with the slow trickle of results. He noticed that CFE technicians loyal to the PRI were using a different entry code than the one supplied to him. Upon entering it, he gained access to the file where the actual results were being compiled, and found that he and the other CFE opposition members were being fed carefully edited numbers. When he tried to print the screen that showed opposition candidates leading, CFE technicians became alarmed; they placed a phone call, and within minutes the computer shut down.

After the dust settled - protests, repression and demands for a real count - it was the PAN and PRI who decided it was better to burn the evidence - ballots of their dirty work. And it is event that continues to stay in a lot of people's memory and this time around they will refuse to be pushed around from the wealthy - the haves - this time around, the disenfranchised mean business. The IFE, the PAN, Fox and Calderón are playing with fire and it is unwise to play down their outrage, especially when people use the words like revolt and revolution.

Outside Mr. López Obrador's campaign headquarters, dozens of supporters - some crying or shouting profanities - urged their candidate to take the fight to the streets. Amid cries of, "If there's no solution, there will be a revolution," supporters vowed to deliver a long, bitter summer.

"This is just beginning," said Elena de la Torre, a history professor and protest organizer. "We're ready for a long fight, not for the PRD, or for López Obrador, but for this nation. We have to rescue our values, rescue our country from these right-wingers."

Marien Villalobos, 22, a university student, sobbed as her mother, 51-year-old Cecilia Garza, consoled her. Both called for a vote-by-vote recount as a way to unite the country.

A full vote count is just a first step. But to really heal the country, an investigations must occur and explain missing votes and the lack of ballots. Although the electoral rules changed due to the 1988 scandal, however, so has the attitude of the citizenry. Mexico is about to explode and her people are unlikely to desist until their demands for a fair election have been met. 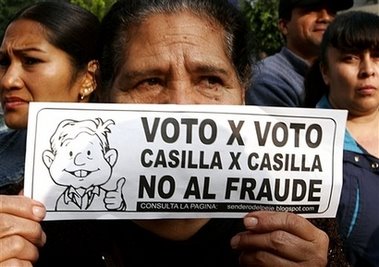