Map of Thailand
It is rumoured that as much as 10 tanks have moved in on the governmental building in Bangkok in what is believed to be a military coup unfolding.  It is said that at least 20-50 soldiers have entered the building and demanded that the police guards inside lay down their arms.

In an effort to quell the coup in its infancy, the Thai Prime Minister Thaksin Shinawatra, attending a United Nations summit in New York at the moment, sacked the Thai military commander, Lieutenant General Sonthi Boonyaratglin, and ordered troops not to "move illegally".  He urged the armed forces chiefs to report to acting Prime Minister Chidchai Vanasatidya while declaring a state of emergency, but the message seemed to have been cut off according to the online news site China view.

The soldiers that stormed the government building, said to be loyal to the deposed military commander, have at the moment occupied the Prime Ministers office and according to a recent statement on Thai television The Thai armed forces and national police chiefs have set up a commission to decide on political reforms.

UPDATE Below the fold

The written statement relayed by all television channels, said the armed forces and police were in control of Bangkok, which remained peaceful, and that a "Council of Administrative Reform" with King Bhumibol Adulyadej as head of state had seized power in Bangkok and nearby provinces without any resistance.

Traders watching Thailand closely are certain to remember how trouble in the kingdom has had worldwide implications in the past: having The Asia currency crisis that erupted in 1997 in mind, which began with the devaluation of the Thai baht and then snowballed into an international economic downturn. 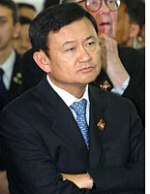 The Thai Prime Minister
Thaksin Shinawatra
Thailand saw a series of military coups d'état up until the 1980s but has since progressed towards democracy.  The current Prime Minister entered politics in late 1994 and was appointed Foreign Minister in December 1994 as a non-MP minister.  Thaksin, being appointed the new leader for Palang Dharma Party (PDP) ran for election for the first time in July 1995, winning a parliamentary seat from Bangkok.  After resigning as the leader of PDP he founded the Thai Rak Thai (TRT) party in 1998 Thaksin won a sweeping victory in the January 2001 elections, the first election held under the People's Constitution of 1997.

Even though Thailand's last military coup was 15 years ago, speculation about military intervention has been rife, with motorists calling traffic radio stations last week after tanks were spotted rolling down streets of the capital.

It is not yet crystal clear whether the Thai King Bhumibol is supporting this alleged military coup, but if this is to be the case then I fear that the chances of Thaksin returning to the country as Thailand's Prime Minister is rather slim.

According to the latest developments it seems as if the newly formed "Council of Administrative Reform" now formally has dissmissed the democratically elected government of Thailand and revoked the new constitution. The online site the Standard reports;

An army general, speaking on condition of anonymity because of the sensitivity of the situation, said that Army Commander-in-Chief General Sondhi Boonyaratkalin had used the military to take over power from the prime minister. He said troops were moved from the western province of Kanchanaburi to stage the coup. He said the coup makers arrested Deputy Prime Minister Chitchai Wannasathit and Defense Minister Thammarak Isaragura na Ayuthaya - two close loyalists of Thaksin - and that Chitchai agreed to resign.

"The armed forces commander and the national police commander have successfully taken over Bangkok and the surrounding area in order to maintain peace and order. There has been no struggle," the announcement said. "We ask for the cooperation of the public and ask your pardon for the inconvenience."

This article is also available at Bitsofnews.com.