Vampire policy makers of the IMF (and the ECB) 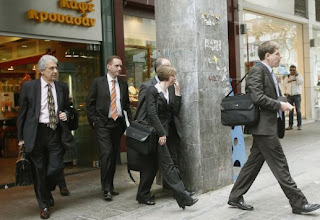 Statement by the EC, ECB, and IMF on the Second Review Mission to Greece

Abstract: IMF / ECB / EC to Greek workers: You're screwed and there's nothing you can do about it. We own you. If what we say sounds illogical - good, logic is an unproductive remnant of a bygone democratic era which you are well advised to forget as soon as possible...

The objectives underpinning the program are to restore fiscal sustainability, safeguard financial sector stability, and boost competitiveness--to create the conditions for sustained growth and employment. Maintaining fairness in the program also remains of paramount concern and this will continue to guide the direction of policies in the period ahead.

Translation: The objectives underpinning the program are to promote the German Stupidity Pact at the expense of the taxpayers and working people in particular, promote widespread social instability, poverty and gaping income differentials, and boost competitiveness by squashing already meager wages and salaries in the country to third-world levels. Maintaining fairness in the program is absolutely of no real concern to anyone, although a show of concern is put on for PR purposes just in case anyone in Greece is dense enough to fall for this bullshit or any bleeding hearts in Germany start wondering.

Regarding the outlook, the economy is expected to begin turning around in 2011. Wage and price inflation is beginning to moderate, setting the stage for improvements in competitiveness.

Comment: These are the same people who expected inflation to be around 1,9% this year (as opposed to ~5% at least in reality), despite having prescribed the blitzkrieg of indirect tax increases that have played the major role in pulling the inflation rate to numbers not seen in Greece the last 10 years. Inflation from where I am looking does not seem to moderate. In fact the new batch of VAT increases (in basic foodstuff as well) and other tax hikes (such as toll road fees, bus tickets etc) that they have imposed on our sorry asses, are almost certain to have a positive effect on price inflation.

Wage inflation is certainly beginning to "moderate": in fact wages are in free fall - its like saying of a sinking ship that "its upwards momentum has began to moderate". Public sector wages having been cut by 20-40% this year and private sector wages plummeting as employers take advantage of widespread insecurity and galloping unemployment (suffered even before the "troika" basically destroyed the small and ineffective fig-leaf that was Greek labor laws and collective bargaining system - see below), in a country where "half of Greece's paid employees [had] net incomes of between €501 and €1000" in 2006. Of course "wage moderation" in the private sector was created by forbidding by law any wage increases in any company regardless of any agreements.

As for competitiveness this is a buzzword the IMF uses for creating more impoverished and desperate workers. In 2005 the ECB was reporting that much of the competitiveness problems Greece faced were due (as much or more) on high-profit and indirect taxation driven inflation. This almost certainly continued till the crisis of 08. Inflation through indirect taxation though is exactly what the troika is boosting. The troika is hard at work indeed (along with their henchmen in the Greek government) to increase that sort of competitiveness - yet why would the average Greek worker set to join the working destitute and live in a desert of vanishing social welfare safety nets, give a damn about such "competition" towards penury?

Finally, the laughable prediction of "turning around the economy within 2011" has few outside observers agreeing, as they seem to see the depression in Greece extending to well beyond 2011:

"The Greek Government's 2011 budget should be enough to ensure that it can continue to tap its euro 110bn bailout facility, but it does nothing to improve the medium-term outlook for the economy and public finances," said Ben May, European economist at Capital Economics.

The budget also forecasts a sharper recession next year than originally predicted, with the economy expected to contract by 3 percent compared to the originally forecast 2.6 percent. This follows from a 4.2 percent contraction this year.

"With the economy likely to remain in recession well beyond 2012, we think that the debt to GDP ratio could eventually exceed 170 percent of GDP, implying that a restructuring of government debt is eventually all but inevitable," May said.

This seems about right to me...

Translation: Because an acknowledgment of higher than expected deficit reduction would create problems in the legitimization of the implicit goal of thirdworldization, we had to run the numbers yet again so as to show that the original deficit was in fact higher than originally determined. This allows us to put in effect measures regarding (what will, we hope, become) a path to a sweatshop economy, that will make the "satanic mills" of the 19th century look like the Swedish welfare state. Since it is inconceivable that our, wholly arbitrary but nevertheless sacred, numerical targets might be revised in light of this re-estimation of the 2009 deficit, all else follows inescapably.

Comment: It is indicative as to what passes for logic in the IMF's communiques, that they use as an excuse for the latest series of attacks against working people in Greece the fact that their (totally unrealistic and consciously unrealistic) revenue "projections" have not been met. However even an Athens cabdriver could certainly have guessed that by asphyxiating the economy and creating a depression from this recession, these projections (which were based on assuming little decline in real taxable incomes and an inspection mechanism that was both crooked and inefficient already, before being further defunded by the measures imposed by the troika itself) were ludicrously unrealistic to begin with. Thus as Greece "fails" unavoidably to meet other unrealistic projections one should expect further measures to correct this "underperformance"...

New measures have been agreed to broaden tax bases and eliminate wasteful spending, particularly in the areas of:

Translation: New measures have been agreed, to rob the working classes of any meager savings they might have retained and to destroy the last vestiges of a (sub-standard even before the IMF plague) social state.


will also result in a less efficient tax collection system.

The government's fiscal policy remains anchored in reducing the deficit to below 3 percent of GDP by 2014. The government's medium-term budget strategy paper, to be discussed in the next review, will specify time-bound action plans for crucial structural reforms needed to achieve the remaining fiscal adjustment, and to do so in a socially balanced way.

Translation: The government's fiscal policy remains anchored in reducing the deficit to a completely outlandish and arbitrary number by a completely outlandish and arbitrary date, which, if achieved will have had the result of reducing the country to third world levels in all sorts of measures of living standards. That this goal is unachievable will allow the ECB and the IMF bastards to claim that Greece failed in its programme, and force an onerous  default on the country at some point, on colonial terms.

Structural reforms are needed to secure Greece's competitiveness, reinvigorate output, and increase employment. While significant progress has been made, with some landmark reforms--including pension reform--the program has now reached a critical juncture.

Translation: Structural reforms, and by such we mean the many ways we have devised to redistribute wealth to the richest, inside the country, and to the core EU from the periphery, at the EU level, are needed to secure that workers will be so disempowered as to accept working for crumbs... Old people will die before they receive pensions: even if they don't keel over through overwork and disease, they will starve or freeze to death given the minuscule amounts they will receive as what will be laughably called "wages".

Many of the reforms that are necessary to transform Greece into a dynamic and export-driven economy require skillful design and political resolve to overcome entrenched interests.

Translation: First of all some terms: Entrenched interests = The great majority of the population. Then "export driven economy", as trained and skilled labor flees to other countries in order to feed themselves and their families, = a labor intensive export economy... Thus Greek wages will certainly float down to those of their Balkan neighbors and, who knows, if labor flexibility is aggressively pursued, perhaps below that. Of course one could argue that it is impossible to turn a country which has been seriously deindustrialized, as is par for EU policy regarding periphery countries from 10% of GDP exports to a net exporter - exporting what? What would it mean for Greece to become an "export driven economy"? How wise is it to prescribe as a cure something which is by design impossible to implement on a global level and which will be antagonized continuously by the hard Euro policy?

The challenge now is to implement an ambitious schedule for these next-stage reforms:


Let me point out that "aligning wages more closely with firm level productivity" is bullshit. On two counts: One, currently they have forbidden any wage increases at all in Greek companies, even if there is agreement between workers and management, thus the alignment they're referring to is only downward. Second, what they have done by prioritizing "firm level wage agreements" over collective general or even sectoral agreements, isn't aligning "wages to productivity" but aligning them to despair, given that real unemployment in Greece is scheduled to reach at least 20% by next year. Thus firms will be able to coerce workers into working for a pittance regardless of firm profits or "productivity".

All the measures they have imposed have this common denominator: wage depression. To an unprecedented extent. However even Eurobank Research, hardly a paragon of worker advocacy, seems to think that they are overdoing it:

The Greek economy has experienced productivity increases of 2.4% per annum on average over the past decade, compared with 0.8% per annum in the EU-16. If productivity continues to increase at comparable rates in the future, ULCs of Greek exporters will likely decline to their level of 2000 within the next two years without the need for radical wage cuts.

Note also that they are creating with all of this a society of even higher criminality and graft, something that isn't likely to help with "competitiveness in tourism", a cornerstone of the greek economy, obviously...

In summary: the reforms needed to return Greece to robust economic growth are underway, but developments to date also reveal that structural issues must be dealt with to make the adjustment sustainable.

Translation: In summary: the reforms needed to return Greece to third-world status are underway, but developments to date also reveal that structural issues must be dealt with to make the adjustment sustainable, so that the country remains a basketcase for the foreseeable future.

I'll let Jarvis Cocker sum it up, and you all can sing along with him:

(A first draft of this was previously posted in histologion)