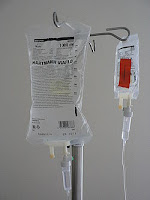 A report from the Society for the Organization of Society (SOS) commissioned by the Department of Homeland Security has recommended that government propaganda be administered intravenously in the near future, the La Rochelle Times learned on Wednesday. According to the report, citizens are to be given regular doses of intravenous propaganda at local government distribution centers which will be established on a county-by-county basis across the country along with the current vaccination campaign against the H1N1 virus.

"After months of study, we feel the most efficient way for divisive half-truths to be delivered to the American populace is through intravenous needle injections. Each American will be given a regular dose of propaganda along with standard vaccinations, in order to create a more acceptable consensus in American groupthink," said Greg Garius, a reputed scholar and SOS historian. He then added, "Try not to think of this as a choice."

In order to protect against the rapid spread of thought crime and doubleplusungood duckspeak, the government will oblige citizens to visit Homeland Security Crimethink Innoculation Centers at least once a year. There citizens will be quickly and efficiently injected with a dose of propaganda that will inoculate them against dangerous thoughts and ideas for a period of several months.

"We feel, given the current level of threats facing Americans, that this is the best step to take to protect the American people," explained DHS spokesman Ben Dover. "The terrorists are out there, there are balsamic extremists and homophiles everywhere, waiting to strike us. We can't wait for another September 11 to happen before we start vaccinating citizens against dangerous ideas. If we are to survive as a nation, each and every American must receive intravenous propaganda immediately."

Note: This is my first post here in a long while after having taken a break from writing. I thought I would share some humor to brighten a day somewhere. More can be found at The La Rochelle Times homepage. Also there are articles in French for those who are interested.