Obama was target of Indonesia militants

(Reuters) - Indonesian militants captured in recent police raids were planning a series of attacks including a Mumbai-style hotel siege targeting foreigners and an assault on the president at an independence day ceremony.

The men also planned to target U.S. President Barack Obama, who is scheduled to visit the country later this year, and plotted the attacks to install sharia law in the world's most populous Muslim nation, officials said.

Police have arrested and killed several suspected jihadists during a series of raids across Indonesia since February when they discovered a militant training camp in the Sumatran province of Aceh.

Earlier on Friday, an expert on militants said that U.S. President Barack Obama, who is due to visit Indonesia in June, was one of several suspected targets of the militants.

Intelligence expert Mardigu Wowi Prasantyo, who is close to the police investigation, said books and documents found in the raids suggested the militants planned an attack on Obama, possibly during his visit to Indonesia.

"They did not say it, but this was evident in their books and documents, that the leader of America was their enemy and should be attacked whenever possible," he told Reuters by phone.

Obama, who spent part of his childhood in Jakarta, was expected to visit Indonesia in March but delayed his trip until mid-June so he could oversee the passage of the U.S. health bill.

The discovery in late February 2010 of a jihadi training camp in Aceh came as a surprise in three ways. It revealed a major mutation in Indonesian jihadi ranks: a new coalition had emerged that rejected both Jemaah Islamiyah (JI), the best-known such organisation in the region, and the more violent splinter group led until his death in September 2009 by Noordin Top. It had chosen Aceh as a base, despite the antipathy of Acehnese to radical Islam. And it was led by Dulmatin, one of South East Asia's most wanted terrorists, whom officials in both Indonesia and the Philippines believed was in Mindanao.

By mid-April police had arrested 48 coalition members, killed eight, including Dulmatin, and were looking for about fifteen others. 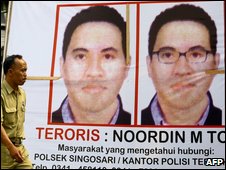 Poots to lead DUP - where?

by Frank Schnittger - May 14
10 comments

by Frank Schnittger - May 11
21 comments

Poots to lead DUP - where?

by Frank Schnittger - May 14
10 comments

by Frank Schnittger - May 11
21 comments

by ARGeezer - May 6
7 comments