THE BEGINNING OF THE RAINBOW ERA.

The Amtrak timetable that took effect November 14, 1971, was the first effort by the carrier to put its own image into place.  There were two earlier timetables, a very rare May 1, 1971 edition, and a somewhat more readily obtained July 15 version.  Both were produced by the National Railway Publishing Company, producer of The Official Guide of the Railways, and they had that Official Guide look to them.  Many of the contracting railroads published timetables for their services.  In the case of Seaboard Coast Line, only a disclaimer "Operated for the National Railroad Passenger Corporation" recognized that there was a new operator of the trains.

That November 14 timetable began with the "Northeast Quick Reference Schedules" in a read-across format typical of airline schedules of the era.  Then came the "National Quick Reference Schedules" in the airline format, with the city where a change of train took place.  At the time, the carrier only listed same-day connections, thus Pittsburgh to Seattle or Los Angeles to Miami were not options.  (Only later did Amtrak make a virtue out of necessity and suggest that cross-country travelers take a day to explore Chicago or Kansas City or New Orleans.) The standard read down - read up timetables were still present, relegated to the rear of the timetable.

At trackside, a few changes were also visible.  November 26 was a Friday, and forty years ago it wasn't as big a deal for Christmas shopping, not that I had a lot of money for shopping in those days anyway.  Bus fare to the Milwaukee Union Station (still known in that way in 1971, although the last North Western train called on April 30 of that year, about the same time the Bucks won their only basketball title) and some Kodachrome I did have.

Union Pacific coaches did make appearances in Milwaukee before Amtrak, part of the mileage equalization agreement among the operators of the City trains.  Southern Pacific cars, because of the City of San Francisco, would occasionally turn up.  A coach yard full of Union Pacific was uncommon. 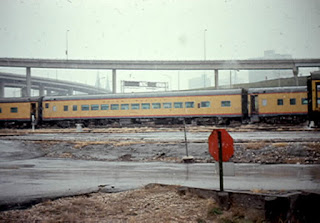 The first train north from Chicago is un-named 321 (the systemwide renumbering of trains also began on November 14), off Chicago at 9.15 and arriving Milwaukee at 10.45, making intermediate stops at Glenview and Sturtevant.   Sturtevant became an Amtrak stop in the summer, to provide Racine passengers who used to use the North Western with a rail option.  Chicago travelers today have two earlier departures, at 6 am except Sunday and 8.25 am daily, and an 89 minute timing inclusive of four stops.  (Regular readers know that 89 minute timing is often 84 minutes in practice.)  Those trains have no food service, although the 10.20 departure has "at-seat cart service" of bag snacks and canned pop.  The airline-style service code for 321 is Y * meaning "Snack or light meal and beverage service" and "First-class service available."  Behind the diesels is today's first-class service: a Burlington dome-parlor built for the Kansas City Zephyr.  Today's business class: a pale shadow of what first class day accommodation used to be. 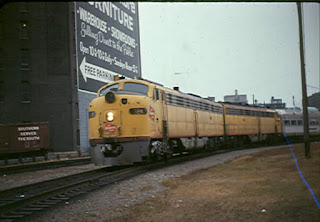 Note at left that the Pritzlaff warehouse, which had those nifty orange water towers with smiley faces, is still receiving rail shipments.

The next scheduled train is Eight, the Empire Builder, off Minneapolis at 6.30 and stopping only at La Crosse for a crew change and a 9.05 departure, and due Milwaukee at 12.15.  I didn't keep real careful notes in those days, and can't tell you whether this train was on time, but do recall that it was close to time.  (Minnesota high speed rail advocates note: two hours thirty minutes Minneapolis to LaCrosse on a seventy mph railroad, which is what it was on those days, and what much of it still is account the curves along the river.) 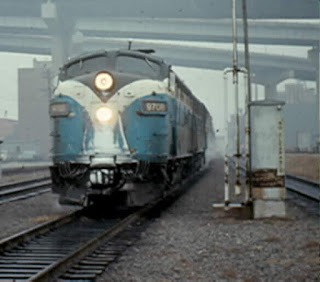 It's a raw day, with rain sometimes wanting to come down as snow, and the prow of that Great Northern F unit tells of wintry conditions to the northwest.  The Builder still looked very much like a Burlington Northern train, although a California Zephyr dome-lounge that included a shower-equipped master room provided a surprise ending.  It is behind a Union Pacific sleeper. 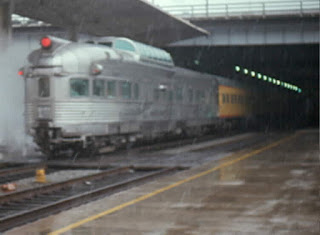 Next in, the Hiawatha, on an 89 minute timing because a proper noon train departs at 12.01.  It's running about an hour ahead of the old Afternoon Hiawatha schedule, while making most of the Morning Hiawatha's stops.  It connects with the bus to Madison at Columbus, but there is no stop at New Lisbon to connect for Wausau. 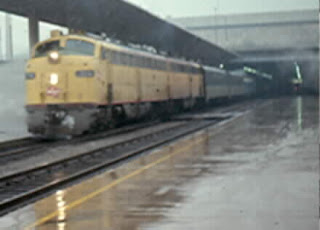 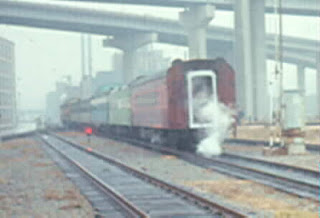 That's a Burlington Northern diner between the coaches and first class.  In the timetable the service code is X *, where the X means "Food service (sit-down) and beverage service."  Amtrak exists in part because of Interstate Commerce Commission standards for on-train service.  Had the railroads managed to get rid of all the dining cars, some rail pundits of the era suggested there would be no Amtrak.  To a passenger purchasing a parlor car seat, it's probably more important that the seat be there than that it be in a rebuilt heavyweight ark of a car.

The next eastbound is a tribute to the clout of Montana Senator Mike Mansfield.  It's Friday, and the tri-weekly North Coast Hiawatha (the Hiawatha operates on days the North Coast doesn't) has come from Seattle along the old Northern Pacific route through the southern (more thickly settled) counties of Montana and North Dakota.  It's also close to time, scheduled out of Minneapolis at 8 am, due into Milwaukee at 2.10 pm after doing the local work along the Mississippi and across Wisconsin.  The concentration of all service onto one route undid the comprehensive all-day service between Chicago and the Cities that the Burlington, North Western, and Milwaukee once offered. It proved easier for Amtrak and The Milwaukee Road to use the time slots of the Hiawathas so as to reduce disruption of the freight service.  Westbound, the Empire Builder starts three hours behind the Hiawatha and gets to Minneapolis two hours thirty minutes later.  It reaches Milwaukee after dark this time of year. 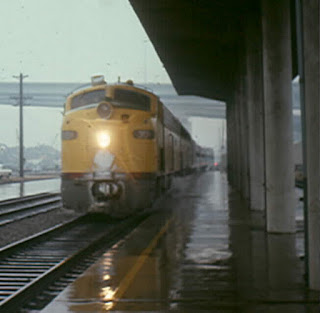 Milwaukee Road diesels, again, that evidence of snow to the northwest, looks like Burlington Northern coaches.  The tail car is another California Zephyr dome-lounge-observation. 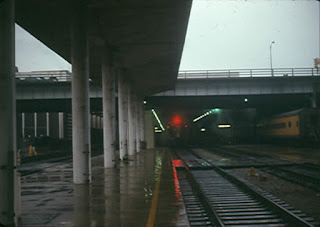 Those Nystrom 1948 Hiawatha coaches at right hung around on the Milwaukee corridor for a long time, first as leased extra capacity, later as additional purchases by Amtrak.  During the summer, Amtrak would take two sets of four coaches and a buffeteria and run a ten car relief to the Builder between Chicago and the Cities on busy days.  Put a Super Dome and a Skytop Lounge on and you'd have a proper train.

The last trains before the light went away were the two Abraham Lincoln trains.

The train to St. Louis left first, at 3.15.  Milwaukee Road power, still clean, and the consist that came in on 321 in the morning had the parlor-observation properly placed for the run to St. Louis. 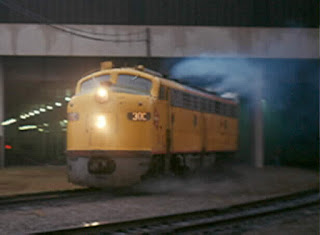 The train from St. Louis was a few minutes late, but beat the twilight. 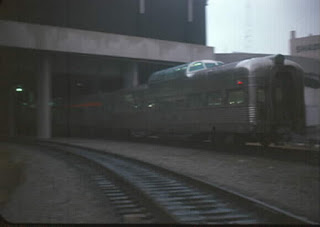 I was out of position for the engines, but got the tail end, including what looks like a Southern Pacific diner and another Kansas City Zephyr dome-parlor, thus the carrier made good on the X * service promised in the timetable.