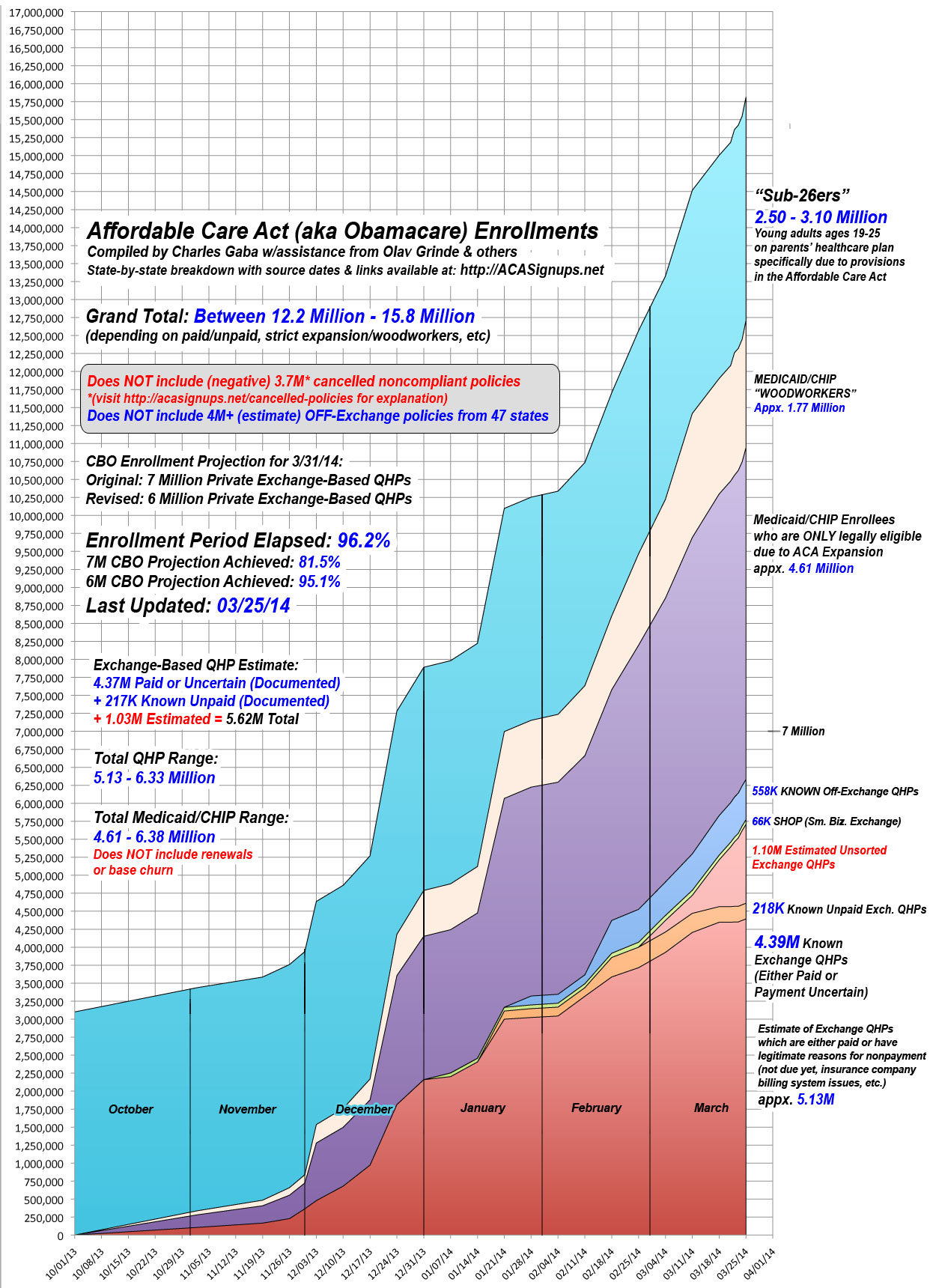 The graph of enrollees gives a good insight of Obamacare success today, which we could compare to a few news items from October/November 2013 (below). It also explains the tone of news a few months ago: the startup was slow and then began to build up power. Will narratives change over time?


The White House has time to right the ship. But not much. Health-care experts suggest the Web site needs to be running smoothly by Thanksgiving at the latest. And even then, it's possible that the initial disruption will have produced a worse risk pool in year one, leading to higher premiums in year two. In that way, the amount of help that this program will deliver to the people who need it most, at least in its early years, is degrading by the day.


"For young adults, Holt said of one recent survey, "if they saw 30 percent increase in their insurance premiums - these are the ones that already had coverage - 45 percent of them said they would drop coverage."
[...]
But what about the subsidies in ObamaCare that are most generous at lower income levels?
For any young person making more than $20,000 a year, insurance premiums -- not even counting deductibles of several thousand dollars -- would cost more than paying the penalty for not getting insurance.
That raises the prospect of young people deciding the plan makes no sense for them.


Here are some of the biggest "fails" from both the federal and state-run sites from the past week:
1. 99 Percent of Obamacare Applications Hit a Wall
Nearly every application on the federal exchanges either failed to sufficiently submit the necessary information or was inadequately processed due to issues with the website and its software.
[...]

2. Media's Favorite Obamacare Enrollee Didn't Actually Enroll
Chad Henderson drew tons of attention from top media outlets when the Obama administration identified him as a successful enrollee on the federal exchanges, only for it to be revealed by his father that he did not, in fact, enroll.
[...]

9. Less Than 1 Percent of Visitors Apply in Connecticut
Connecticut Democratic congressman Jim Himes heralded the 167 applicants on the first day for Access Health CT, the state-run exchange. That's 0.6 percent of the site's 28,000 total visitors on the first day.
[...]

11. No Enrollments in Delaware After Three Days
"If anyone in Delaware has enrolled in an Obamacare health insurance plan yet, it's news to state officials," read the lead of the state's News Journal three days into the enrollment period.
[...]


.
The early ObamaCare enrollment numbers are in and they are not impressive. Only 106,000 people have signed up for health insurance through the Affordable Care Act's exchanges, far less than the 500,000 that the White House had hoped for.
[...]
Young people who don't qualify for government subsidies -- basically, people who make more than $45,000 a year -- don't have a huge incentive to sign up for health insurance they might not even use. The $95 tax penalty for failing to buy insurance might seem worth it to a 30-year-old who would otherwise have to spend $400 a month on a private health-insurance plan.


Obamacare is in crisis, but as the blood flows and the patient becomes ever more lightheaded, the president desperately pretends it's all intentional. As with Aykroyd's grisly "Saturday Night Live" sketch, we know it won't end well, but it's impossible to look away.
[...]
But a working website was never the real problem; it's the law itself -- which, tragically, performs as designed. By setting unrealistically high coverage standards, Obamacare renders millions of insurance policies illegal. Since Oct. 1, about 100,000 have signed up for new coverage under the law, while nearly 5 million families have had their current plans canceled.

Simple economics tells us that nearly everyone dropped by their current insurer will see rate increases; if the law demands new features, those features will cost money. We also know that prices will increase for the younger, healthier purchasers who are expected to subsidize the older and less healthy.


The flawed rollout of Obamacare, his signature legislative achievement, is testing that premise, giving Republicans a chance to re-litigate the role of government and Democrats pause that the damage could lead to congressional losses.
[...]

This is just a quick review from Google, so if you can find other harsh criticisms that proved unfounded, I would be glad to link to them here...