Both nations are morally bankrupt. The U.S. has their school of the Americas with training in death squads and torture. This has been known especially after the investigation and report by the Church Commission.

After 9/11 devastation Ariel Sharon and George Bush joined forces to pronounce an all-out War On Terror (WOT)TM. This was not just on the enemy that attacked New York, Pennsylvania and Washington but included Fatah, Hamas and Hezbollah. The neocons created their war of civilizations and we stood by and let it happen. See all the Islamophobes funded and supported by the terror state Israel and its minions.

I wasn't surprised that the U.N. school with civilians was targeted. This happens in every battle Israel engages with its neighbors, so it's planned and not by accident. It's part of political and military strategy. Netanyahu was pissed at the United Nations and SG Ban Ki-moon for his condemnation of the number of civilian deaths in Gaza.

Netanyahu directly responded to Ban regarding the two-state solution option, saying that Hamas is just another manifestation of violent, Islamic extremist organizations like ISIS, al-Qaida, Hezbollah or Boko Haram. Hamas's grievance, he said, "is that we exist. They don't want a two state solution. They don't want any solution."

The UNHRC decided to start an investigation into war crimes in Gaza by both Hamas and the IDF. Much to the disgust of Netanyahu, his master Ariel Sharon knew hoe to react. The vicious attack on civilians was a 'price-tag' for U.N. interference. I watched war criminal Bibi Netanyahu after Ban Ki-moon spoke at the press-conference, he was f*cking mad. All he spouted was war rhetoric, he was possessed.

Gaza War: Bringing Out the Worst in Israeli Misogyny, Racism

I have stated this before, the Jenin atrocities by Ariel Sharon in 2002 and the handling/torture of Palestinian prisoners was a blueprint for the Pentagon, CIA and the decision makers to use these methods in Iraq. Fallujah, Abu Ghraib, Guantanamo Bay and Bagram. These were a real-life training exercise put in practise, impunity all-in. US Special Forces trained in an IDF facility in Israel's Negev desert. Just returning a favor for the fifties and sixties. Completely morally bankrupt, all of them in the White House, Pentagon and at Langley. Jerusalem is not my business, their day of judgment will come.

Gaza War: Bringing Out the Worst in Israeli Misogyny, Racism

(Tikum Olam) - In last night's post I noted some of the ghoulish reactions by Israelis to the war, from Prof. Mordechai Kedar's call for raping the sisters and mothers of Palestinian terrorists to Rabbi Dov Lior's halachic ruling that it's permissible both to kill Palestinian civilians and raze Gaza to the ground.  Tonight, yet another choice example both of hatred of Palestinians and misogyny toward Palestinian mothers.

The pictured banner was created by the town council of Or Yehuda, just outside Tel Aviv [near Ben Gurion airport].  It's addressed to the local boys who serve in the IDF: 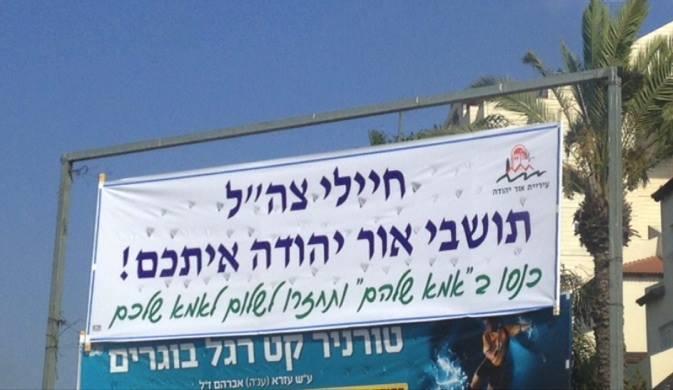 « click for more info
"Soldiers: Pound their Mom so you can return safely to yours." (Tikun Olam)

○ Soldiers: Residents of Or Yehuda are with you!
○ Pound their Mom so you can return safely to yours.

David Sheen first posted this image in his Twitter feed and Ofer Neiman drew my attention to it.  I was struck by the Hebrew slang kansu.  It derives from the verb whose original meaning is "to enter."

From Gideon Levy's new article, 'Images from Gaza should trouble every Israeli' (but don't)