Footing the bill in Libya 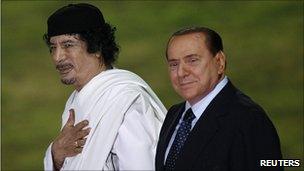 Muammar Gaddafi visited Europe for the last time in August of 2010, received in Rome with all the honours of a chief-of-state. At the time he requested five thousand million euros from the European Union to help the fight against illegal immigration. His words were peremptory: "Tomorrow Europe might no longer be European, and even black, as there are millions who want to come in".

One year later Gaddafi would be summarily executed at the hands of an Islamic militia.

This is a crosspost from AtTheEdgeOfTime.

Gaddafi come to power at the early age of 27, leading a socialist revolution that he would command in autocratic fashion. In plain cold war, NATO soon cast road blocks on his way and the relationship with Europe deteriorated. Gaddafi survived the bombing of his country by NATO in 1985, answering with the Lockerbie massacre in 1987. With the end of the cold war tensions receded, and after a mea culpa regarding terrorism in 1999, Gaddafi's Libya entered the XXI century as a preferential neighbour and partner of Europe.

Gaddafi's power was always underpinned by petroleum, the 1967 revolution in which he took power was to a great extent a reaction to the squandering of this precious resource by the puppet government of king Idris. In contrast to the European market economies, that sold most of the North Sea petroleum during years of low prices, Gaddafi waited. The resumption of economical relations with Europe in the beginning of this century coincided with a secular price rise; Gaddafi increase exports and the euros flowed like ever. All along this rapprochement there was never a real drive from European leaders to democratise Libya, even knowing that repression of Islamists was one of the foundations of the regime. In 2010 Libya was the second richest country in Africa in GDP per capita. That year little over 7 000 illegal immigrants reached Italian shores.

In 2011 Gaddafi faced a long popular uprising lead by various Islamic factions, during which dozens of folk lost their lives. Incited by the US, the EU decided to intervene, initiating an aerial bombing programme supporting the Islamic militias. Just in the day Gaddafi died more that 100 folk perished in Libya, either to NATO's bombs or in summary executions.

Elections took place in July of 2012, with a NATO backed alliance of multiple organisations obtaining nearly half of the votes. In Cyrenaica, the oriental province cradle to king Idris and the uprising of 2011, the moderate and liberal path taken by the new government was poorly received. In September of the same year a series of attacks was perpetrated targeting NATO officials, resulting in the death of American ambassador Christopher Stevens. One year later Cyrenaica declared independence, and has since been governed autonomously by Islamic radicals and descendants of king Idris.

In the western provinces of Tripolitana and Fezzan things did not went better. The elected Parliament was never able to impose its power and soon the political struggle unravelled into an armed conflict. An alternative parliament was installed by an Islamic faction that took Tripoli by storm; the members of the original Parliament fled the country. In the remainder of western Libya there are at least three different armed factions fighting day by day, not even sparing the petroleum infrastructure.

Beyond rippling effects to neighbouring countries, the collapse of the Libyan economy immediately meant misery to the many foreign workers seeking there a better life. Mechanics, construction workers, all sorts of non-qualified jobs where taken by workers original from poorer or unstable countries such as Eritrea, Sudan, Somalia or Ethiopia. They formed the first big wave of illegal migrants towards Europe. Then the Libyan warlords and their militias understood that a continuous flux of illegal migrants meant easy profits. It became a mere business; just in the first quarter of 2015 15 000 illegal immigrants arrived in Italy.

Horrible figures of misery and death in the Mediterranean have had great impact on the public opinion the past few weeks but are yet to bring forward the real reasons for this crisis. Politicians and pundits struggle to recognise the error it was bombing Libya in 2011. Such admission would oblige the recognition of similar foreign policy débâcles in Syria (at Greece's expense) and Ukraine (where so far it has been up to Russia to deal with refuges - possibly more than one million). Notwithstanding, the ravishing of a neighbouring country of this importance certainly has consequences. Note that Benghazi or Tripoli are closer to Brussels than the latter is, for instance, to Lisbon.

The past few months the alternative media have been referring the possibility of a terrestrial operation in Libya led by the Italians. True or not, reality is that at this stage an alternative might not exist to a new military intervention to halt the business of illegal migrations to Europe and to recompose the Libyan economy. The bill is up for payment, put our military on the line so that some sort of normality prevails in Europe.