Leaving the EU implies automatic exclusion from the EEA? 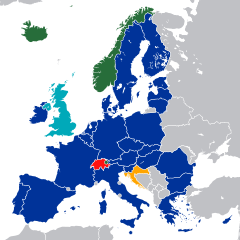 This question is slowly percolating through the wall of noise  around the UK's exit from the EU. More attentive folks are wondering if to leave the European Economic Area (EEA) a formal notification is required. I.e., if beyond triggering Article 50 of the Lisbon Treaty, in order to fully exit its social and economics commitments the UK needs to trigger Article 127 of the EEA Agreement.

This question is highly relevant for a simple reason: membership of the EEA was not voted in referendum, therefore the UK institutions - Government, Parliament and House of Lords - are not morally obliged to any particular course of action in this regard. If leaving the EU does not automatically exclude the UK from the EEA, it will then remain a full member of the so called "Common Market" with all the rights and obligations it entails.

The EEA Agreement was the final step before the creation of the EU, providing both for an ante-chamber for members to be and a socio-economic relationship framework for neighbouring countries. It was signed in 1992 individually by each of the fifteen members of the then European Community (EC) plus three members of the European Free Trade Association (EFTA). It was this agreement that enshrined the legal basis for what is often referred as "The Four Freedoms": the free movement of Goods, People, Capital and Services.

The EEA Agreement was clearly designed exclusively for EC and EFTA members, as can be read already in the opening statement:


Part VII of the Agreement lays out the institutional structure governing the EEA. Article 90 establishes clearly whom takes part:

This means that upon leaving the EU, the UK will lose its representation in the EEA Council, but it is far from implying a complete exit from the EEA. In effect, nowhere in this part of the Agreement is stated that membership of the EC or the EFTA are a precondition for participation in the EEA.

In Part IX are established a series of provisions to the functioning of the EEA; within, Article 126 opens with:

1. (19) The Agreement shall apply to the territories to which the Treaty establishing the European Economic Community (20) is applied and under the conditions laid down in that Treaty (21), and to the territories of Iceland (22), the Principality of Liechtenstein and the Kingdom of Norway (23).


At this point things become somewhat murkier. This paragraph clearly states to which territories the Agreement applies, but does it mean that it does not apply elsewhere? This is perhaps the key to the wider question.

It is also worthy to read closely the conditions for an exit from the EEA. This is the soon to be famous Article 127:

Immediately after the notification of the intended withdrawal, the other Contracting Parties shall convene a diplomatic conference in order to envisage the necessary modifications to bring to the Agreement.


Pretty bare, but enough to establish an interesting exit strategy for the UK government. If indeed it comes to be established that leaving the EU does not imply automatic exclusion from the EEA, the UK government may opt to trigger Article 50 and calmly focus on disentangle itself from the EU exclusively at the political and budgetary levels. Later on, if it so wishes, the UK government may deliver notice to an exit from the EEA within an extended time frame, say five or six years. During that period it can take its time drafting a new socio-economic relationship with the EU, a UK-EU Free Trade Agreement.

At this moment I am inclined to think that triggering Article 50 of the Lisbon treaty does not automatically imply an exit from the EEA. But I am far from knowing the EU legislation and treaties in full.

What are you thoughts? Would you know other provisions in EU treaties that could clarify this matter? Please leave your comments below.

This is a cross-post from AtTheEdgeOfTime