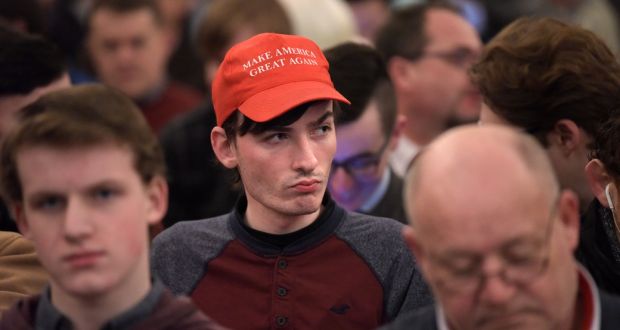 Nigel Farage was in Dublin over the week-end making the case for Ireland to exit the EU along with the UK at a conference organised by the Ukip-led Europe of Freedom and Direct Democracy group in the EU Parliament. Some of the participants wore "Make America Great Again" hats and also expressed support for Donald Trump.

Other speakers included John Waters and Anthony Coughlan. John Waters is a journalist who opposed to Marriage Equality referendum, is an active participant in the Catholic cultural movement Communion and Liberation, and wrote articles in support of the invasion of Iraq. His former partner, the singer Sinéad O'Connor, has expressed concern for his welfare, saying that she thought he was suffering from depression and needed to admit it.

Anthony Coughlan lectured me in social policy in Trinity College Dublin in the 1970's and seemed, even then, to be a throwback to a mythological previous age where Irish virtues were pitted against the evil influences of European and other foreign organisations. He opposed Ireland's entry into the Common Market in 1973 and every EU referendum since.

There are other voices against EU membership in Ireland and many who feel that the merits of our membership should at least be re-examined. Perhaps the most influential is economist and columnist David McWilliams, whose website claims he is the 10th. most influential economist in the world, and who has frequently argued that Ireland is economically and culturally an Atlantic nation which should seek closer alliances with the US and UK rather than the EU. Interestingly, he was not at the conference.

There is, indeed, a case to be made against Ireland's continued membership of the EU, but at the moment that case is being made mostly by fringe voices on the extreme conservative and nationalist ends of the political spectrum - to such an extent that no major political party has currently embraced an anti-EU membership platform. However I would expect that Euro-scepticism in general will become more mainstream in Irish political discourse in the years to come, and I will try to articulate the main reasons why in this diary.

Firstly, while our cultural and economic links with EU members have been growing over the past 45 years of membership, the UK and US are still our primary trading partners and external cultural reference points with very large Irish diasporas of many millions claiming Irish ancestry and heritage is both countries. For good or ill, that will continue to be the case for the foreseeable future. Brexit threatens to disrupt our relationship with the UK, and particularly with Northern Ireland. Irexit could ameliorate that particular problem.

Secondly, while Ireland has benefited significantly from EU Structural, Regional, Agricultural and Cohesion funds, those benefits have to be balanced by the opportunity cost of losing control of our fisheries in our territorial waters. When Ireland joined the EU in 1973 the Irish fishing industry was tiny and extremely underdeveloped, and catches and exports have actually increased substantially since. Irish boats caught approximately 10% of the fish caught in Irish territorial waters prior to EU entry, and this has risen to c. 25% now. Even now, however, there are only c. 11,000 people employed in the industry which makes up less than 1% of Irish GDP, so while there would be scope for an enlarged fishing industry post Irexit, the overall impact on the Irish economy would be relatively small.

Thirdly, Ireland's policy of neutrality is increasingly being compromised by the EU's Common Foreign and Security policy and involvement in Permanent Structured Cooperation (PESCO) which may become more and more a substitute for NATO, especially if US isolationism gathers momentum. Ireland never joined NATO and remained formally neutral in WWII, even if informal assistance was given to the Allied side and many thousands of Irish soldiers fought under the British flag in both WWI and II. If the EU itself were to get caught up in more military adventurism in the Middle East and beyond, this could become a serious issue in Ireland.

Fourthly, Ireland was treated abominably by the EU in the wake of the banking collapse. While there is no doubt lax Irish regulation contributed to the debacle, the EU insisted that Irish taxpayers should bail-out foreign bond-holders in Irish banks - even junior bondholders not covered by the ill-advised Government bank guarantee. While the EU has since revised its bank resolution rules, Irish taxpayers won't be getting a refund any time soon, and the bulk of the debt incurred still forms part of Ireland's sovereign debt.

Fifthly, perhaps the most persuasive argument for supporting Irexit is that the EU, minus the UK, will become increasingly German dominated, and the centre of political gravity will move decisively east. Ireland is already coming under a lot of pressure to reform its corporate tax laws, and without the UK as an ally, could be subject to all sorts of arm twisting to force it to change - even though tax is still formally a national competency, and subject to a national veto.

However the counter argument is that multi-national companies, and the profits they generate, are only located in Ireland because of our membership of the EU, and would swiftly depart on Irexit. In addition there is widespread acceptance, in Ireland, that the tax competition model of attracting FDI is approaching it's sell by date in any case. Future Irish growth will have to be driven much more by indigenous companies and their growth is critically dependent on access to the Single Market.

Finally some delegates at the Irexit conference pointed to Ireland's recently acquired status as a net contributor to the EU as a reason for leaving. However our small net contribution is some way off equalling the c. €40 Billion Ireland has received in net benefits from the EU since 1973. In addition, the benefits of having access to the EU Single market have been enormous. The Multinational sector made up of companies attracted to Ireland because of our access to the Single Market currently makes up c. 16% of Irish GDP.

But eaten bread is soon forgotten. Demagogues can point to the future rather than the past and state that it is time to stand on our own two feet as an independent nation. National chauvinism always has an appeal for some, especially if immigrants are seen to deprive locals of jobs.

Much of the growth of the Celtic Tiger era was driven by eastern European immigration, and not all immigrants left when the economy crashed. It was noteworthy that despite what was happening in some other countries, there was no significant rise in racism and xenophobia as the unemployed numbers grew. Now that the economy is growing rapidly again and approaching full employment, rising numbers of immigrants will again be required to make up for skill shortages. Hopefully this will again not result in too much friction or tension, particularly as housing shortages are becoming a major issue.

But if you are young, unemployed, and having difficulty getting a job or housing it is easy to see why you might be attracted to a vision of an independent Ireland controlling it's own immigration, not getting involved in foreign entanglements, and focused primarily on providing local employment and housing for local people. If you are a social or religious conservative, it is easy to see why you might resent the cosmopolitan, liberalising, and secularising influence of the EU and our near neighbours. If you are a nationalist zealot comfortable in your own circumstances, you might be appalled at how modern Ireland has developed and not too concerned that most of Ireland's wealth is now generated because of our close association with the EU

Not everyone is doing well, and there is a market in resentment for Farage et al to exploit. Of course the vision he presents - of Ireland throwing its lot back in with England - rather ignores our unhappy colonial history of that relationship. Outrageously, he has compared Ireland's fight for national self determination against colonial domination 100 years ago with the UK's fight for Brexit now. There are reasons why 88% of Irish people support continued EU membership, and some of them have to do with a determination never to enter into a subjugated relationship with our near neighbours again.

Nigel Farage can clown around all he wants, because if anything, his presence in Ireland strengthens support for the EU here by reminding us of how we don't want to be ruled again.