Oh horror! Just 10 years ago before the Obama's reset of relations with Russia ... a short historical review.

Plans by Russia's President Dmitry Medvedev to deploy missiles just a stone's throw from EU borders has caused concern in western Europe. Politicians are urging Russia and the US to enter into a constructive dialog.

German Foreign Minister Frank-Walter Steinmeier has criticized Russia's plans to deploy missiles in Kaliningrad. He told German television it was "the wrong signal at the wrong time."

Steinmeier called on Russia to enter into dialogue with the United States on the issue. He said he hoped Moscow would recognize the election of Barack Obama as an opportunity for a new beginning. At the same time, he warned of a new spiral of rearmament in Europe.

Russia's President Dmitry Medvedev on Wednesday, Nov. 5 announced plans to position short-range missiles in the western Russian territory of Kaliningrad, located on the EU's eastern border between Lithuania and Poland. Medvedev justified the move as a reaction to US plans to set up a missile defense shield in Poland.

Russia is a required partner

"Russia is not an easy partner," Steinmeier said. But without Russia, international crises such as Afghanistan, Iran, the Middle East or Caucasus could not be solved, he said.

The European Commission urged member states to agree to resume EU-Russia partnership talks in its review of EU-Russia relations. Discussions between the two sides were suspended in September following the Russia-Georgia conflict.

However, EU External Relations Commissioner Benita Ferrero-Waldner said the talks "are not a gift to Russia."

"We have a deep and complex relationship where our mutual interests are deeply entwined," Ferrero-Waldner told the EU Parliament's foreign affairs committee.

In his first state-of-the-nation speech since taking office in May, Medvedev on Wednesday, Nov. 5, did not mention president-elect Barack Obama by name and lashed out at the United States', seeming to challenge its policy on all fronts. 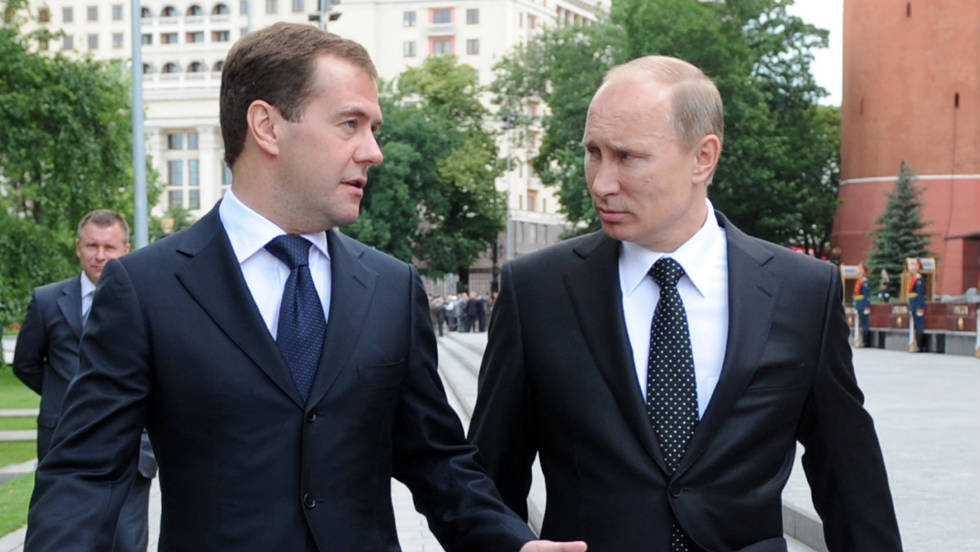 Medvedev, 43, began the address in the Kremlin's most sumptuous St. George hall by charging Washington with encouraging Georgia's "barbaric aggression," which Russia says led it into a five-day war in Georgia's separatist region of South Ossetia in August.

He said the US had used the war as a pretext for NATO enlargement, which Moscow views along with the missile defense plans as a US-led threat to its security, and placed blame for the global financial crisis on US "selfish" and "reckless" policies.

Russia's relations with the US deteriorated under the presidencies of Medvedev's predecessor Vladimir Putin and US President George W. Bush, unraveling cooperation on non-nuclear proliferation, Iran and other issues.

The Kremlin leader also called for an extension of the presidential term from four to six years among other political reforms that will set Washington on watch for any back-tracking on what it already views as a frail democracy in Russia.

The announcement that Moscow would deploy short-range Iskander missiles in its Baltic Sea enclave Kaliningrad bordering with Poland was the first detailing of retaliatory steps Russia has said it would take to counter a US missile shield in Eastern Europe.

Medvedev added that the navy would also be called upon and an electronic-blocking radar would be deployed to impair the US missile elements planned in Poland and the Czech Republic. He did not did not say whether the Iskander installations would be nuclear armed.

Minutes into his speech Wednesday, Medvedev blamed US policy for recklessness in spreading its financial ills to global markets and it could no longer stand up as the underwriter of the global financial order.

"We need to create mechanisms that would block erroneous, egotistical and sometimes even dangerous decisions by some members of the global community," Medvedev said.

He added Russia's recent war with Georgia was a product of US self-interests and unilateral foreign policy that was detrimental to the stability of the volatile region and the greater security order.

Medvedev added that Washington had sought to use the war in Georgia to push forward NATO expansion along Russia's borders beyond its conventional purview as a Western military alliance.

The USGC Dallas, which recently delivered humanitarian aid to Georgia's Black Sea port of Batumi, docked at the Crimean port, where Russia has a naval base, at the invitation of Kiev. The ship's arrival was met by thousands of anti-NATO protesters chanting "Yankees go home!" and waving banners with the slogan "NATO Stop!" Police cordoned off the area around the ship.

In an interview published on March 31 in the "Financial Times," Georgian President Mikheil Saakashvili argued that a decision by NATO member states to "appease" Moscow by not offering Georgia a Membership Action Plan (MAP) at NATO's April 2-4 Bucharest Summit would "serve the [interests] of the conservatives among the Russian leadership, instead of giving [Russian President-elect Dmitry] Medvedev a clean slate and starting a relationship from this new starting point.

A Bush administration plan to deploy a missile defense shield in Eastern Europe is drawing protests from Russia and from residents who oppose hosting foreign military bases and fear the facilities might make their countries targets for attack.

The proposed placement of about 10 interceptor missiles in Poland and a radar tracking station in the Czech Republic would pose a "clear threat" to Russia, Col. Gen. Vladimir Popovkin, chief of Russia's Space Forces, told reporters last week. He spoke after the United States announced it would open formal negotiations with the two former client states of the Soviet Union.

Russian Foreign Ministry spokesman Mikhail Kamynin underlined his government's opposition Friday, saying in an interview with the ITAR-Tass news agency that "the creation of a U.S. European anti-missile base can only be regarded as a substantial reconfiguration of the American military presence in Europe." He called the move "a mistaken step with negative consequences for international security."

The Bush administration maintains that the missile system is limited and not meant to counter Russia, with its huge nuclear arsenal, but to protect against a "rogue state" such as Iran or North Korea attacking with a small number of intercontinental ballistic missiles. Eastern Europe lies along the flight path such rockets would follow from the Middle East to the United States.

Since the fall of communism, political leaders in Prague and Warsaw have viewed U.S. military prowess as key to their countries' security. They favor the U.S. plans for missile defense, but that may not be enough to carry the day -- there is considerable public opposition to the plans in both countries.

After nearly eight months of political paralysis, a new Czech government finally won a vote of confidence this month -- and the United States issued its request for negotiations shortly afterward.

Now the anti-Russia rhetoric is starting all over ... how one would have expected Russia to react to blatant aggression by NATO expansion and the US arming border states to Russia. Bush - Obama - Trump ... no change and no non-intervention. The Pentagon and "deep-state" rolls on based on covert acts,warmongering and demanding loyalty from weak political leaders in European states.

The Kremlin has stressed it has the sovereign right to deploy missiles on its own territory after reports Russia deployed the Iskander nuclear-capable missile system in Kaliningrad on the Baltic Sea. Russia said on Tuesday that it had the right to put weapons anywhere it chose on its own territory after reports that Moscow had deployed nuclear-capable Iskander missiles in Kaliningrad drew criticism from its neighbors and NATO.

Kaliningrad is a Russian exclave on the Baltic Sea, and the missiles would be able to reach large parts of territory in NATO-members Poland, Lithuania, Latvia and Estonia.

The president of Lithuania, which neighbors Kaliningrad, and a senior Russian lawmaker, both said the missile systems had been deployed to the region. Russia has not confirmed the deployment.

"It means that what we have been talking about -- the necessity to discuss strengthening air defense elements during the NATO summit in July; strengthening the chain of command, to talk about many questions that affect defense of our region and Latvia specifically -- it all has been confirmed by the practical actions of Russia," said Rinkevics.

The alleged placement of Iskander missiles so close to NATO territory are perceived by some alliance members as a threat at a time when tensions between Russia and its Western neighbors are running high over Moscow's 2014 annexation of Crimea.

"This again makes the situation even more serious because Iskanders in Kaliningrad means dangers for half of European capitals," said Lithuanian President Dalia Grybauskaite on Monday.