Think again! Who is closer to Chabad-Lubovitch and its worldly oligarchs: Vladimir Putin or Benjamin Netanyahu?

○ Is love or politics behind Putin's promotion of Chabad? | Times of Israel |

Towards the end of the visit, Wolff and Central Synagogue president Danny Taibel presented Netanyahu with a framed photo of the prime minister receiving a dollar bill from the Rebbe--Rabbi Menachem M. Schneerson, of righteous memory--taken during Netanyahu's tenure as ambassador to the United Nations in the 1980s.

Gorin said that Putin's suggestion for the articles seized by the Bolsheviks -- to be housed in Moscow's Jewish Museum and Tolerance Center -- was a good compromise.

The $50 million museum, which opened to great fanfare [NYT] last November, was bankrolled by oligarchs close to the Kremlin and is controlled by Chabad in Russia.

Gorin said that Putin's statement came in response to a question from Viktor Vekselberg , one of Russia's richest men and a prominent backer of Moscow's Jewish museum, during Putin's first visit there. Putin said that repatriating property seized by the Bolsheviks during and after the Russian Revolution to overseas organizations could open a "Pandora's box," given the massive volume of other properties the revolutionaries had nationalized. But he was open to the idea of the library being "placed on the center's premises."

Agudas Chasidei Chabad, the umbrella organization of the international Chabad-Lubavitch movement, has fought for decades to retrieve the Schneerson Collection from Russia. In recent years, the lawsuits have strained already delicate relations between the United States and Russia.

Two years ago, a federal judge in Washington ruled that the collection had to be returned to Chabad. As a result, the Russian government told Russian museums to stop lending artwork to American institutions in case Chabad's lawyers seized them.

This past January, Royce Lamberth, chief judge of the U.S. District Court for the District of Columbia, imposed a $50,000-a-day fine on the Russian government for each day that it does not return the collection.

That's why it was significant that shortly after Putin suggested moving the Schneerson Library to Moscow's Jewish museum, there was an apparent thaw in rhetoric coming from the Kremlin. Vladimir Medinsky, Russia's culture minister, told the Interfax news agency February 25: "The problem [of the Schneerson Collection] does not lie in relations between Russia and the United States. It lies in relations between Russia and a Jewish community registered in the United States." 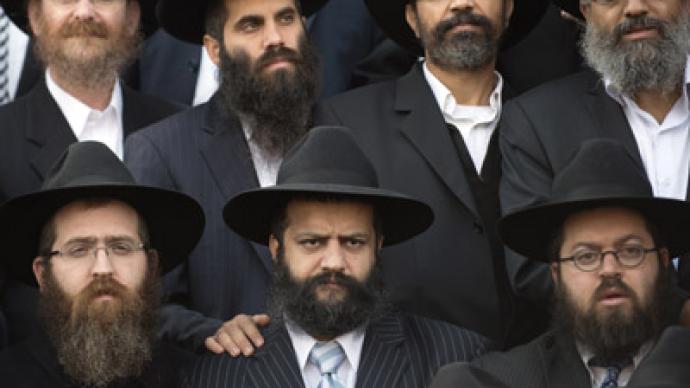 Calls to leaders of Agudas Chasidei Chabad and to Boruch Shlomo Cunin, a Lubavitch rabbi who has been central to the effort to retrieve the Schneerson Collection, were not returned.

In the 1990s, a fire left the garage decrepit and dysfunctional. Following mass restoration efforts it re-opened in 2008, initially to house the Garage Centre for Contemporary Culture. And then in 2012, thanks to generous funding from oligarchs like Roman Abramovich and Viktor Vekselberg, from Jewish organisations like FEOR and Chabad Lubavitch -- even with the support President Vladimir Putin himself - a site that had once represented another aspect of Soviet state control became home to the world's largest Jewish museum.
[Source: Free state: Moscow's Jewish Museum and its quest for an open society ]

Viktor Vekselberg originally made his wealth in the metals and energy industries, accumulating a net worth now estimated at more than $10 billion. In 2010, the Russian government appointed him to head the Skolkovo project, an international tech hub still under completion on the outskirts of Moscow.

In 2013, the Russian billionaire backed Maxfield Capital, a venture fund operating globally from its offices in Moscow, New York City and Tel Aviv. One of Maxfield's latest investment went to On Farm, a California-based startup developing an IoT platform to manage farm hardware technologies.

Vekselberg is not the only Russian billionaire to invest in international startups. It has just been revealed that Alisher Usmanov, a key shareholder of the Mail.ru Group, owns a stake in Uber via his fund USM, along with Dagestani oligarch Ziyavudin Magomedov via Caspian VC.

Also active on the global tech scene is Roman Abramovich, who has invested in a number of startups essentially in Israel, Russia, the US and the UK.

The inaugural event of Tel Aviv University's new Friends Association in Russia was held at the Skolkovo Institute of Science and Technology in Moscow, in the presence of the President of the Skolkovo Foundation and founding President of the Russian Friends, businessman and philanthropist Mr. Viktor Vekselberg; Ambassador of Israel in Russia, Ms. Dorit Goldener; TAU President Joseph Klafter and 200 leading members of Moscow business and academic circles.

Prof. Klafter said: "We are grateful for the leadership of Mr. Viktor Vekselberg in bringing Tel Aviv University to the Skolkovo Institute of Science and Technology, and for opening the doors of opportunity for the University in Moscow and throughout Russia."

By June 2013, MIT staff had assisted Skoltech in drafting more than 39 policies, modeled on successful practice in Cambridge, as well as on benchmarks of other leading universities. Introducing and adapting international best practices in Russia is an important goal for Skoltech, as it seeks to attract staff and serve as a model for the changing higher education sector.

To this end, MIT Skoltech Initiative staff and faculty leads have participated in a series of strategic planning exercises, beginning with a "strategy day," held in September, in Cambridge. Through this and other sessions, MIT provided input on Skoltech research priorities and institutional development. MIT also provided templates for an annual operating plan, a financial model, a resource development strategy, and a staff ramp-up, informed by previous experience with international programs in Singapore and Abu Dhabi. Such processes are helping to establish a sustainable business model at Skoltech.

in a merger with Russias Oleg Deripaska and Viktor Vekselberg

○ August 2006, Russian media reported that SUAL and Rusal were merging, will include the Swiss company Glencore