Deflecting all events that doesn't fit well into his narrative, Bil Browder talks to the media ...

Bill Browder: I found a way to challenge Putin. He's really sore about it | The Guardian |

Browder is heartened, though, that attitudes to Russia appear to be hardening, at least in Britain, after the Skripal case. Parliament is clearly "seething", he said, and Theresa May's speech on the incident was "extremely tough. But now she needs to follow up with action."

The Chelsea football club owner, Roman Abramovich, may have taken up Israeli citizenship this week because of his UK visa problems, but "even assuming that's policy, does `not renewing a visa' measure up against a chemical weapons attack?"
Having himself faced death threats, Browder finds western agonising over the "niceties" of whether or not the Russian journalist Arkady Babchenko should have gone along with the Ukrainian secret service's plan to fake his own death this week to be absurd.

"Far too many people have been killed by Putin already," he says. "If you ask me whether I prefer a purist approach towards the information war or having Mr Babchenko dead, I know my answer. Russia is going to make stuff up no matter what. We should just save lives where we can and debunk their nonsense."

Bill Browder got roasted during the sworn testimony of Glenn Simpson [Fusion GPS] before U.S. Congress in August 2017.

That battle escalated when the ranking member of the Senate Judiciary Committee, Sen. Dianne Feinstein, unilaterally released the transcript of an interview the committee conducted last August with Glenn Simpson, a Fusion cofounder.

In the interview, Simpson said his work for the American law firm BakerHostetler - which was representing Prevezon, a Russian holding company the US government accused of laundering money into New York City real estate - was focused "on trying to get William Browder to testify under oath about his role in this case and his activities in Russia."

...
Simpson told lawmakers in August that Browder would not answer any of BakerHostetler's questions about Magnitsky's and Prevezon's purported involvement in the tax-fraud scheme. Browder also evaded subpoenas, Simpson said.

"So we subpoenaed his hedge fund," Simpson told the committee. "He then changed the hedge fund registration, took his name off, said it was on there by accident, it was a mistake, and said that he had no presence in the United States."

Browder, a wealthy investor who renounced his US citizenship in 1998, has characterized Fusion's work for BakerHostetler as a "smear campaign" and tweeted on Tuesday that Simpson repeated "old and false Russian government attacks on me and Sergei Magnitsky."

In his testimony Glenn Simpson repeats old and false Russian government attacks on me and Sergei Magnitsky. He then whitewashes his accused Russian money launderer clients who received money from the crime Sergei Magnitsky was killed over

In another attempt to smear Russia, the Ukrainian SBU in collusion with reporter Babchenko set up a fake murder only to reappear the next day during a press conference ... 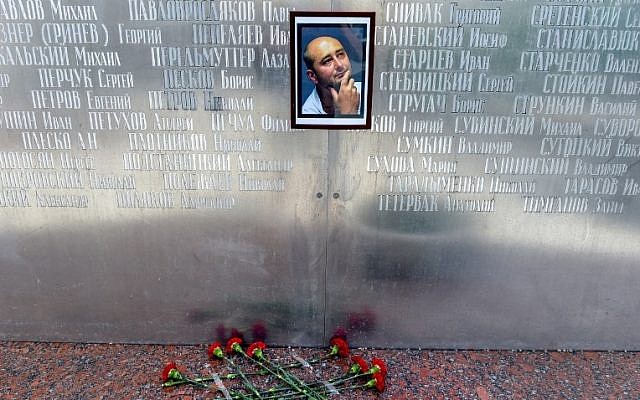 Leaning that someone is in fact alive and well is usually cause for celebration. But when news broke that Russian journalist Arkady Babchenko's death had been faked to deceive the public, many were left feeling bewildered or even aghast. Ukrainians, as well as friends and observers abroad, were shaking their heads in disbelief when it was revealed that Kremlin-critic Babchenko's feigned murder was an elaborate ploy hatched by the Ukrainian secret service.

The ordeal was, according to Ukrainian authorities, used to foil an actual Russian-orchestrated plot to kill Babchenko and others. Evidence presented by Ukraine's secrete service and public prosecutor to prove this claim, however, remains flimsy. There is footage showing the alleged mastermind of the murder plot being arrested on a street, as well as a video of cash being secretly exchanged to pay for weapons and an assassin. No faces can be made out but what is said can be heard.

It is clear that Babchenko willingly participated in the secret service ploy. He was even photographed lying in a pool of blood ― an image that went around the world to document a murder that never happened, sanctioned by Ukrainian authorities. Evidently, the purpose of the ploy was to garner maximum attention. Even German President Frank-Walter Steinmeier, who was visiting Kyiv at the time, was made to believe this elaborate lie.

Ukraine under pressure after faking journalist's death | Times of Israel |

The global diplomatic campaign to hold Russia to account for downing Malaysia Airlines flight 17 over Ukraine has hit a surprise hurdle. Malaysia has broken ranks with Australia and The Netherlands and declared that there is no conclusive evidence to confirm Russia was responsible.

That's also at odds with the multi-country team of investigators, who said only a week ago, they had traced the missile launcher to the Russian Federation's 53rd Anti-Aircraft Rocket Brigade.

Malaysian transport minister Anthony Loke says there is no conclusive evidence that Russia is to blame for the 2014 downing of Malaysia Airlines flight 17, in contradiction with the findings of an international team of investigators.

Loke told Channel NewsAsia that it was premature to "pinpoint at Russia" in explaining the crash.

"There is no conclusive evidence to point at Russia under the JIT [Joint Investigative Team] evidence," Loke said, adding that investigators' final report will be released in July.

PM Rutte, a conservative as brightest pupil in a mix of Theresa May and Donald Trump ...
cutting into the right-wing agenda of populist/Islamophobe Geert Wilders to win seats.