Of course the Dutch Liberal Conservative Party (VVD) of Mark Rutte has no roots in the Dutch Golden Age of tremendous wealth gathered from overseas colonialism. Like hunters traveling the treacherous seas, confronting pirates, competition from Portugal, Spain and Britain. The spoils was for the taking, the strange, wild folks over there had little culture, at least we didn't understand their customs and roots where these people originated. Often the subculture people were taken as slaves and traded on the best markets for high returns.

[My bad  the British and the French made more profit in the slave trade because they cared better during transport  see article: Dutch Slavery: Our Dark Past.]

Why did we trade black people as slaves instead of poor white people? That was purely a racist matter. We could barely see them as equal human beings and slavery was legitimated by the Bible. The Bible has always been a good tool to legitimize every morally objectionable activity, even though it presents itself as a moral guide.

In the 20th century Western Europe developed after two devastating Great Wars that destroyed mankind, social fabric and caused untold misery for tens of millions and a multiple of deaths and suffering for a decade or more.

To develop the Western economy, immigrants were welcomed by business people, they were so kind and smart to set up coordinated hiring offices in North African nations and Turkey. That was the phase after the EEC of six countries expanded to Europe's Mediterranean coast of Spain, Italy and Greece. These migrant workers left the northern states to find employment in their home countries of their birth. They never felt welcome as they were often employed in the menial jobs as cleaner, factory worker in production of textiles (Twente) or leather shoes (Waalwijk NB) or in the factories of Electronic giant Philips Industries in Eindhoven and across many cities in The Netherlands.

There have been many phases of migrants and immigrants from the overseas colonial nations who have become independent after 1945: Indonesia with Molluccans, Papua Guinea, Suriname and the Caribbean Islands, some are still part of Holland.

Everyone knows how politics has changed, especially after the attacks of 9/11 and the states can name any opposition force as being terrorists. I have covered this recently. This introduced Islamophobia, which was nurtured by a number of states, NGOs and lobby groups for treacherous or nefarious goals: to gain more seats in parliament and ultimately power to run the government.

In the Netherlands we have encountered a number op political figures who played a prominent role. There were some early fringe parties who posed questions about foreigners and the failure to integrate into Dutch society. The party of Joop Glimmerveen called the Nederlandse Volks-Unie was the most prominent in the 1980s.

The uneasy feeling brought forth by such parties against our foreign workers, who were supposed to be temporary job seekers and return home, gained much esteem when Pim Fortuyn presented himself on the political stage. His timing was perfect and the polls jumped to higher number of seats in a matter of weeks. He didn't have a name for the party except his own. He had no party leadership and where to find members who can fulfill a role as a member of parliament. Chaos and a disaster was about to happen. Shortly before the elections of a new parliament, Pim Fortuyn was assassinated [May 2002] by a disturbed person, an activist for animal welfare, against the broad meat production industry in the Netherlands, a veganist. He took it upon himself to fire six shots at point blank distance into this phenomenal Dutch upcoming politician. He died instantly, he had no chance of survival.

The role of harder immigration policy came forth from the right-wing of the VVD with two or three politicians: Geert Wilders, Ayaan Hirsi Ali and Rita Verdonk. All three, once elected to a seat in Dutch parliament, left or formed a new party.

The most successful of course is the role of Geert Wilders and his one-man party the PVV. After the Theo van Gogh murder [Nov. 2004] by an extreme Muslim in Amsterdam, the stage was set for extremism from all sides n Dutch politics. Fueled by the foreign adventures, yes more than foolish as Trump stated in Helsinki, by the illegal wars in Iraq and the push for regime change in Libya, Syria and the putsch of the Maidan revolt in the Ukraine in 2014. The Clash of Civilization was "mission accomplished" in 2016 with the election of not only Trump but also right-wing xenophobic political leaders in Western Europe and authoritarian, fascist leaders in Russia, Turkey and Israel. At the moment the world as we know it are facing staggering problems and there is too little leadership and vision to solve them. The division of each nation today is so great that it blocks a fruitful debate, the willingness to make a deal or compromise in order to move forward. The new word in US politics is "resistance" or as the Republicans during the Obama years, the party of "NO". It offers no inspiraton to the voters.

The greatest problem is the political narrative has become our modern version of the Tower of Babel. The technical world is shape that every citizen can easily communicate, put forth his opinion, build a network and virtual communities. With the Internet of Things, what we can do especially is manipulate, make false news, publish fake photo's or videos. Under the Obama administration it became policy that the US Government was permitted to disseminate propaganda, misinformation to the domestic public.

The antagonism against Russia is a prime example. The narrative and perception are so well repeated that there is no way people with opposing views are able to convince the other. As in the First World War in the trenches of Northern France the great armies were dug in and couldn't move any distance without being mowed down by rattling bullets from the enemy. How fortunate in the advance of mankind, another means of warfare was adopted: poisonous gas.

Society appears to have adopted this trench warfare and the use of "poisonous" words: earlier we would say a pen dipped in lethal poison. Because that is exactly what is happening from the Al Qaeda and Islamic State jihadists to US white supremacists, Fox News with Hannity and Breitbart News with Steve Bannon to the likes of Nigel Farage in London, Geert Wilders of Holland and the Ariel Sharon and Bibi Netanyahu in Israel.

Freedom of Speech is the most valuable freedom in a democracy, however I don't consider the United States a democracy any longer, it's a state led by corporate greed and power.

Geert Wilders goes to the extreme and creates fear and hatred of our fellow Dutch citizens. One of his worst remarks was a short speech during the election ...

This could be a page out of any fascist state!

And Dutch far-right leader Geert Wilders has been funded over the years by Jewish leaders in the U.S. {David Horowitz Freedom Center and others] and he is loved in Israel for his anti-Palestinian speeches - .

Today a video surfaced of, once again, an exponent of PM Mark Rutte's VVD, the Liberal Conservative Party.

There are no peaceful multicultural societies and it is genetically determined that man cannot connect with "unknown people", Minister Stef Blok (VVD) of Foreign Affairs said during a private meeting with Dutch who work for international organizations last week Tuesday, which current affairs program Zembla has footage of.

"Give me an example of a multi-ethnic or multicultural society where the original population still lives (...) and where there is a peaceful society. I don't know of one", he said. According to the Dutch Foreign Affairs Minister, every society has boundaries when it comes to taking in immigrants. He called it "very nice" to have a Turkish baker around the corner, but added that there can be "some side effects". "If you live in the middle of it, you will suffer enormously."

Blok also said that it is genetically determined that groups of people cannot get along with each other.

"It's probably somewhere deep in our genes that we want to have
a well-organized group to hunt with or to maintain a village with.
And that we are not able to connect with people unknown to us."

One of the other meeting attendees noted that Suriname is an example of a peaceful multicultural society. But Blok responded that Suriname is a failed state, partly because its political parties are divided along ethnic lines. Singapore is also not a good example, according to Blok. "Singapore is indeed a mini-country, extremely selective in its migration (...) They do not allow poor migrants. Yes, eventually, possibly for cleaning", he said.

Dutch parliamentarians are shocked by these statements.

PM Mark Rutte holds a slim margin of a single seat for his coalition of four parties in Dutch parliament and it hasn't been smooth sailing all along ...

Do we need to be reminded, Dutch PM Mark Rutte at the opening of Nord Stream 1 in the year 2011 ;) 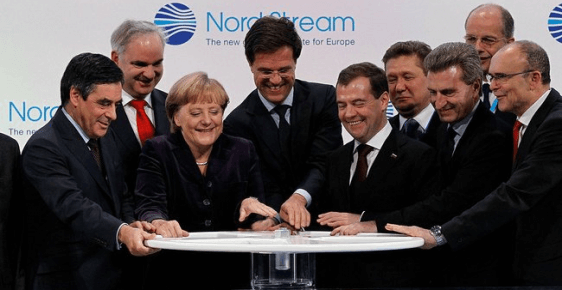 The Expert Group on Fighting Transborder Corruption of the EU-Russia Civil Society Forum, in which NHC Associate Policy Director Harry Hummel takes part, issued a new report with two new case studies on investments of Russian companies in the European Union: the Nord Stream project and the Transmashholding company. The case studies document a range of questionable practices of these companies and raise questions about the role of business and individual counterparts in the European Union.

The North Stream project is a gas pipeline in the Baltic Sea implemented by a Russian-German-Dutch business consortium, with a majority share of Gazprom. The case study relates how high-level politicians in Russia and Sweden were involved in the project both while serving in official positions and after that. Questions are also raised over financial support given by the company to Swedish groups originally opposing the project, and on the extremely high costs of the Russian part of the pipeline. This case study was written by Grigory Pasko of the Foundation 19/29, a Russian investigative journalism group.

And we should not forget the Dutch immigrants from Holland, Michigan. The Dutch are well assimilated in American culture and contribute as stakeholders in the Trump administration. Still some Dutch colonial power structure from the Apartheid in South Africa, slave trade from West Africa to the Caribbean and now a chance to be rehabilitated as the white superior race in Trumps AmericaFirst! What a bs has become of the beacon of the Free World  the Statue of Liberty offered by the French for the first centennial celebration in 1876. The beacon of light has been extinguished  a New World Order will take hold  hoping the planet survives the Medieval opinions in America about the sciences and Climate Change. Save the Planet, Dump Trump and his Republican friends.