As US democrats have jumped the shark after Hillary's defeat over US Intelligence, FBI failure in HRC e-mails, investigation by special prosecutor Robert Mueller, claims president Trump is a Russian agent ...

○ Arrest of "spy" Maria Butina: Did a Russian Crime Boss Fund Trump Through the NRA?

Oops ... Russian "crime boss" was at the time head of the Russian Central Bank. A meeting was set up with former head of Israel's Central Bank, now working for the U.S FED:

Stanley Fischer, former Bank of Israel governor, reportedly met with Maria Butina, accused in the US of spying for Russia, while he was serving as vice chairman of the US Federal Reserve; Fischer confirms meeting with Russian Central Bank deputy governor Alexander Torshin, but says can't recall if Butina was his interpreter.

Maria Butina, accused in the United States of spying for Russia, met with economist Stanley Fischer, who served as the governor of the Bank of Israel and later as the vice chairman of the US Federal Reserve.

According to several people familiar with the sessions and a report prepared by a Washington think tank that arranged them, Butina took part in 2015 meetings between a visiting Russian official and two senior US officials--Fischer, at the time the Federal Reserve vice chairman, and Nathan Sheets, then Treasury undersecretary for international affairs.

Butina traveled to the United States in April 2015 with Alexander Torshin, then the Russian Central Bank deputy governor, and they took part in separate meetings with Fischer and Sheets to discuss US-Russian economic relations during Democratic former President Barack Obama's administration.

...
The meetings with Fischer and Sheets were arranged by the Center for the National Interest, a Washington foreign policy think tank that is supportive of efforts to improve US-Russia relations. Paul Saunders, its executive director, in December 2016 urged then President-elect Donald Trump to ease tensions with Russia. In articles in its magazine, The National Interest, members of the think tank have also warned of the costs to the United States of confronting Russia or getting involved in Eurasian conflicts. [Paul Saunders @CNA]

On short list to replace Stanley Fischer as governor of Israel's Central Bank was Mario Blejer. Didn't the hedge fund oligarch Paul Singer cash in over a billion US dollars from Argentina treasury?

Launched seven years ago under the Birthright organization's umbrella, the Birthright Israel Excel business leadership program aims to "spot the next Michael Steinhardt, Lynn Schusterman and Paul Singer"--the future Jewish investors in the State of Israel. 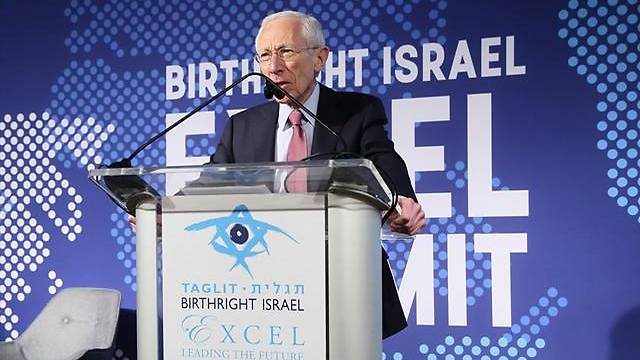 "We must empower them both personally and in terms of the business community we will provide them with to reach that goal," explains Birthright Israel Excel Executive Director Noa Meir.

Keynote speakers at this year's annual Excel Summit, held in New York earlier this month, were former Bank of Israel Governor Stanley Fischer, who told the program's graduates about the Israeli economy and why Israel will keep relying on economic support from the United States, and Senator Cory Booker of New Jersey, who has been dubbed by parts of the US Democratic camp as the "next Barack Obama" and received a standing ovation from the young Jews in the audience.

...
Israelis 'taking over' the program

Each student in the business track teams up with one of the Israeli participants--BA students and officers from leading IDF units--30 of whom attended the New York conference this year. The Israeli participants play an active part in the educational program and create personal ties with the North American participants, which gives them a chance to foster business contacts.

In Excel's ventures track, eight Israelis who graduated from top IDF units and the country's leading educational institutions, team up with 16 Americans and they all enter a 10-week accelerator, in which they receive tools for creating a startup company.

From my previous diary ...

You can read this story also in The National (Emirates) ... hmmm who was it tied up with the UAE sheikh and Cambridge Analytica? Robert Mercer?  Who was tied up with funding of Fusion GPS and the trash on Donald Trump? Paul Singer?