Frans, Unfit To Serve the EU

Never read a more ridiculous OpEd than what I saw in The Guardian today ...

As a 12 yr old learning at an International School in Rome. Amazing that one falls in love with the British and as a leading EU politician to set out Europe's policy for hard talk with a year of negotiations. The UK under long Conservative rule with Boris Johnson as Prime Minister, we don't fare well by a romantic, the EU needs a realist to preserve the Four Freedoms and the multilateral attitude of diplomacy aiming for a peaceful world. One bully in Washington DC is more than enough, Frans you need to protect the self-interest of the 27 EU nations. There is no room for such silly talk about how the relationship COULD have been or MAY BE in the future.

Just as in your personal life, you divorced and married again and build a new relationship. There is no turning back in your lifetime Frans. Get over it! I've given you the benefit of doubt, but you just nailed it yourself. A former member of the Dutch Labour party, you are no realist nor a leader.

My love letter to Britain: family ties can never really be severed | The Guardian - Opinion |

Since I went to a British school, you have always been part of me. Now you are leaving, and it breaks my heart

Recently read a delightful book of love letters to Europe. And it made me contemplate my love for Britain. It has just occurred to me that when you joined the European Economic Community I was in one of your schools. Not on your soil, mind you, but in Italy. Saint George's British International School in Rome, to be precise. I was 12 years old and still learning English.

That year I also dressed up in a kimono, as one of the "gentlemen from Japan" in the Mikado, the school play. Mrs Alcock encouraged me not to sing too loudly, so that my false notes would be less audible. But she kept me on stage. I loved it. Like I loved being part of the chorus in My Fair Lady the next year and the Mock Turtle in Alice in Wonderland the year after.

More than 40 years have passed since then. So much has happened. My family went back to the Netherlands, I studied there and in France. I got married and became a father, did my military service, worked as a diplomat, divorced and married again, got elected to parliament, served in government and am now in the European commission. Britain was always there. As part of me. Being in one of your schools made me more Dutch than before. Because there is no better way to be made aware of your own culture than by being immersed in another. And at the same time, that immersion leaves traces. What you inhale and absorb remains: as an extra layer, a sediment that partly merged with what was already there and partly remains distinguishable and unique.

Boris Johnson 'booed' during his first speech as Foreign Secretary

A supporter of a second European Union referendum who has criticised Boris Johnson for "borderline racist" comments has emerged as the frontrunner to replace Jean-Claude Juncker but immediately faced opposition from populist central European governments at a tetchy Brussels summit. 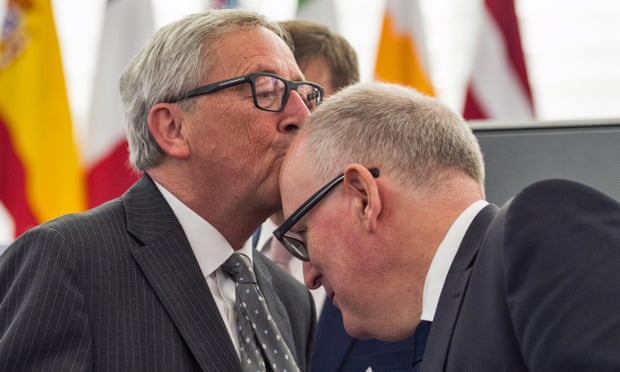 Frans Timmermans, a self-confessed anglophile who is fluent in seven languages, had appeared to be in pole position to take over from Juncker to head the European commission from 1 November as leaders met on Sunday evening.

His candidacy had been given a boost over the weekend by the German chancellor, Angela Merkel, who said Timmermans, the Socialists' and Democrats' nominee for the post, or the German centre-right MEP Manfred Weber would be "part of the solution".

The French president, Emmanuel Macron, has opposed Weber's claim to the role as group leader of the European People's party (EPP), the largest group in the European parliament.

More about the EU and Timmermans ...