True Character of Brexit and Its Backers Exposed

My life's compass is to stay true to your principles of fraternity and equality ... we're all brothers and sisters in a social network to support those in need. Civilization will be destroyed by the selfishness of pure capitalism, wealth and inequality.

A choice in life between peace or war!

What has been exposed within a failed democracy called the House of Commons and its representatives on the conservative Tory side and the kabuki theater on the side of the opposition. The people not well served.

The Guardian offers opinion articles any author of suspense could build an empire on a nr. 1 seller on the list of fiction. 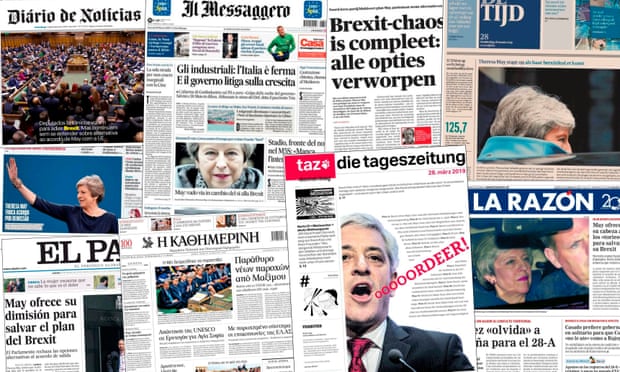 European press gets popcorn out for another chaotic day of Brexit

European press and commentators switched on the TV, pulled out the popcorn and sat back to watch the latest preposterous episode in Britain's Brexit psychodrama with a mixture of disbelief and resignation.

"Most series start getting dull after a second or third season, but Brexit's different," said Germany's Die Zeit . "The longer it lasts, the better the plot gets. Yesterday's twist was the best yet: first the unloved PM offers to go, then MPs seize the initiative and it seems the tide may be turning.

"But wait ... In the end, it turns out they can agree on - absolutely nothing. So, cue uproar in the house, and the credits start running. `Order,' roars John Bercow. Please do not adjust your set: we'll be back right after the break."

A few days before the 2015 general election, the prime minister, David Cameron, tweeted: "Britain faces an inescapable choice - strong and stable government with me, or chaos with Ed Miliband." Cameron won (the first general election the Tories have won outright since 1992), followed through on his pledge to hold a referendum on staying in the European Union, promised not to resign if he lost, lost and then resigned as chaos ensued.

Theresa May took over after all other challengers either fell on their swords, stabbed each other in the back, or put their foot in their mouths. It is as good a time as any to recall that, of all the jokers and hucksters standing for the Conservative party leadership, she was probably the best candidate. It really could have been worse. It could have been Andrea Leadsom.

Be clear which of the current crises in British politics matters more in the long term. This isn't easy right now, when the prospect of a Conservative leadership contest inevitably triggers a Tory party and media frenzy. Nevertheless, Brexit is the root of the matter.

It bears repeating at a time like this that the crisis is not simply May's fault, even though the way she has mishandled Brexit is a reminder of the extent to which individuals matter in history. This crisis in fact remains what it has been since June 2017 - the product of a lethally destabilising convergence of three things: the challenge to parliamentary government caused by the 2016 referendum result, the difficulty of dealing with major issues in a hung parliament, and above all the immensity of the Brexit issue itself in resetting Britain's national order and its place in the world. None of that is going to change under a new leader.

Brexit would have tested a Cromwell, a Lloyd George or a Thatcher, never mind a May. But parliament has responded this week, always seriously, and sometimes heroically. That was never more apparent than as the Commons took control of the Brexit agenda. MPs have used their muscle twice this week, first ripping up the parliamentary rulebook on Monday in the unavoidable task of providing the leadership that May failed to give; and second, with a 44-strong majority today, by foiling the government's malicious attempt to derail the process at the first attempt.

Theresa May will leave office in an "orderly handover" whenever an EU withdrawal deal is done. No one is weeping. The oddity is: we may yet come to miss her, though she has been the worst prime minister of our political lifetimes - bar none. Yet there was one great good purpose in her premiership: by occupying the space, however vacuously, she kept out the barbarian hordes of Brexiteers barging one another out of the way to seize her throne.

Now she has surrendered that one useful role, leaving the country to the untender mercies of those competing in Europhobia for the votes of some 120,000 dwindling Tory party members. To use her deathless phrase, nothing will be changed by her departure. Parliament will be as gridlocked as ever, the combat deadlier with an avowed Brextremist at the helm.

A young Theresa May with such a vision for Great Britain ...

TM: "Brexit means Brexit, and we're going to make a success of it." #TM4PM

Trump sees Brexit day March 29th as Britain's Fourth of July - and Theresa May as Britain's Mueller: the deep state trying to reverse 2016. Bannon calls it "the nullification project".  My column on why Trump is so visceral about a no deal Brexit.  (_link)

America Today: Has A Jew A Path to the White House?

The Mistrial of Donald Trump