The U.S. Navy had been operating out of Manama, Bahrain, since 1948. From a nominal presence of five ships, the U.S. flotilla was expanded to a peak of 27 ships and 16,800 personnel assigned to the Joint Middle East Task Force (later to become the 5th Fleet in 1995) in early 1988. American warships sailed the Persian Gulf, Gulf of Oman and the North Arabian Sea. Carrier battle groups rotated duty in the Arabian Sea.

The Army played a role, too. The 160th Special Operations Aviation Regiment, dubbed the "Night Stalkers," contributed four MH-6 light attack helicopters early on. In 1988, 15 modernized Kiowas, under the Army Helicopter Improvement Program, were secretly rushed to the Persian Gulf and operated by Task Force 118.

Task Force 160, also known as the "Wings of the Delta Force," lived up to its motto: "Death Waits in the Dark." Armed with 7.62mm machine guns and 2.75- inch rockets, its "Little Birds" proved lethal, especially at night.

USS Stark was deployed to the Middle East Force in 1984 and 1987. Captain Glenn R. Brindel was the commanding officer during the 1987 deployment. The ship was struck on 17 May 1987 by two Exocet anti-ship missiles during the Iran-Iraq War fired from an Iraqi Dassault Mirage F1 aircraft. The Reagan administration however attributed the blame to Iran for its alleged belligerence in the underlying conflict. The plane had taken off from Shaibah (in Iraq) at 20:00 and had flown south into the Persian Gulf. The pilot fired the first Exocet missile from a range of 22.5 nautical miles (41.7 km), and the second from 15.5 nautical miles (28.7 km), just about the time Stark issued a standard warning by radio. The frigate did not detect the missiles with radar; warning was given by the lookout only moments before the missiles struck. The first penetrated the port-side hull and failed to detonate, but left flaming rocket fuel in its path. The second entered at almost the same point, and, leaving a 3-by-4-meter (10 by 13 ft) gash, exploded in crew quarters. 37 sailors were killed and 21 were injured.

Keeping an illusion through decades of war and hostilities ...

Over the objection of CNO Admiral Carlisle Trost, the Secretary of Defense approved orders sending the Aegis cruiser USS Vincennes (CG-49) on a short-notice deployment into the Arabian Gulf--the first time a "latest-and-greatest" Aegis cruiser had operated in the very confined water space inside the Arabian Gulf. The Aegis cruiser had by far the most sophisticated radar and anti-aircraft missile suite in the world. Vincennes had a reputation as a "robo-cruiser," partly because of her powerful technological capability and partly because of the particularly aggressive way in which Captain William C. Rogers III handled his ship. Captain Rogers repeatedly lobbied the commander of the Joint Task Force Middle East, Rear Admiral Anthony "Tony" Less, to permit Vincennes to take a more active role than just providing air defense coverage to the southern Arabian Gulf.

The severe losses inflicted on the Iranian Navy during Operation Praying Mantis in April 1988 bought only about a month of relative calm. The Iranian Revolutionary Guard Corps Navy (IRGCN) which had suffered much less loss and damage than the regular Islamic Republic of Iran Navy (IRIN) increased their tempo of operations in late May 1988. Continued Iraqi attacks on land and at sea in the northern Arabian Gulf caused the Iranians to resume retaliatory attacks on neutral merchant shipping in the southern Arabian Gulf, which was presumed by the Iranians to be providing indirect aid to the Iraqi war effort.

The Navy has granted commendation medals to the commander and the anti-air warfare officer who were serving aboard the USS Vincennes in 1988 when the Aegis cruiser shot down an Iranian airliner over the Persian Gulf, a spokesman said on Monday.

A Navy spokesman, Lt. Cmdr. Craig Quigley, said a Legion of Merit was given to Capt. Will C. Rogers III for ″exceptionally meritorious conduct in the performance of outstanding service″ during his command of the ship from April 1987 to May 1989.

The Navy investigated and concluded that ''stress . . . and unconscious distortion of data may have played a major role in this incident.'' Although no disciplinary action was recommended, the finding did not fully absolve the actions of the officers responsible.

''The president of the United States takes pleasure in presenting the Legion of Merit to Capt. Will C. Rogers III, U.S. Navy, for service as set forth in the following citation:

One award was for his ″meritorious service″ during his May 1984 to December 1988 tour aboard the cruiser. The second was in recognition of his role during an engagement with seven Iranian gunboats in the Persian Gulf on July 3, 1988.

In 1988 Iraq and Iran had been at war for eight years, in a war that Saddam Hussein started by invading his neighbours. It was a bloody conflict on both sides, with up to 200,000 dead, but in 1988 the Iranians were in the stronger position. The US, who saw Iran's Islamic revolutionary regime as their main enemy, sided with Saddam Hussein. US Warships in the Gulf attacked Iranian military boats and oil platforms.

And then on the 3rd of July 1988, in an incident which echoed horribly in the MH17 disaster, the captain of American warship the USS Vincennes launched two guided missiles to destroy Iran Air Flight 655, an Iranian civilian Airbus carrying 290 passengers and crew to Dubai.

Still at least they didn't lie about it, right? As Boris Johnson wrote in his Telegraph column, "when America erred, there was no significant attempt to deny the truth, or to cover up the enormity of what had happened."

But that's not true. The US claimed that the Americans had been under unprovoked attack by Iranian patrol boats and mistook the airliner for an Iranian warplane. Many aspects of the US story were eventually shown to be false, key being that the Airbus was on a scheduled flight and had not, as the American's claimed, changed course towards their ship.

According to secret documents that I got my hands on, American President Ronald Reagan and British Prime Minister Margaret Thatcher wrote to each other saying Iran itself was to blame for the US shooting down an Iranian civilian airliner. Ron and Maggie said the US were acting "in self defence" when they killed the 290 passengers and crew. The papers show that the British publicly backed American claims that the Iranians were to blame.p> It reads, Dear Margaret, I want to thank you for your prompt support of US defensive actions in the Iran airline incident, and is signed, Regards, Ron. Reagan recognised Thatchers government were quick to back American claims that they had shot down the airliner in self defence.

This is followed up by a longer letter to Dear Margaret from Reagan, marked Secret. The letter says Reagan, would like to share with you some thoughts about the recent Iranair 655 tragedy in the Persian Gulf. Reagans main thought is that this was a tragedy but one for which Iran bears responsibility. Reagans main worry is that the Iranians want the UN to condemn Americas killing of the civilians. He argues that the Airbus shoot down Should not be used to undermine our mutual interests in the Gulf and the Western naval presence there.

[] Before that, a Confidential telex from the Foreign Office to the British Embassy in Washington from the 13th of July said that the line to take in public was that the shoot down took place, following an Iranian attack and that, The USS Vincennes issued warnings to an approaching unidentified aircraft but received no response and that, we fully accept the right of forces in the Gulf to defend themselves.

Privately they were much more critical. Under the heading Confidential the same memo says, There remains a good deal of confusion and uncertainty. A number of details in the original US version of events have subsequently been corrected. For example, it has now been established, contrary to initial US claims, that the airbus was flying within its civil airline corridor and that it was a scheduled flight. The paper added, there are questions about other US claims including, why the USS Vincennes electronic interrogation equipment indicated that the aircraft was a military aircraft, and whether the warship tried to contact the aircraft on the proper radio frequencies.

DUBAI, UAE -- Mourners tossed flowers from a helicopter and a ferry into the Persian Gulf off the coast of Iran on Tuesday to mark the 30th anniversary of the U.S. Navy shooting down an Iranian commercial airline, which killed 290 people. 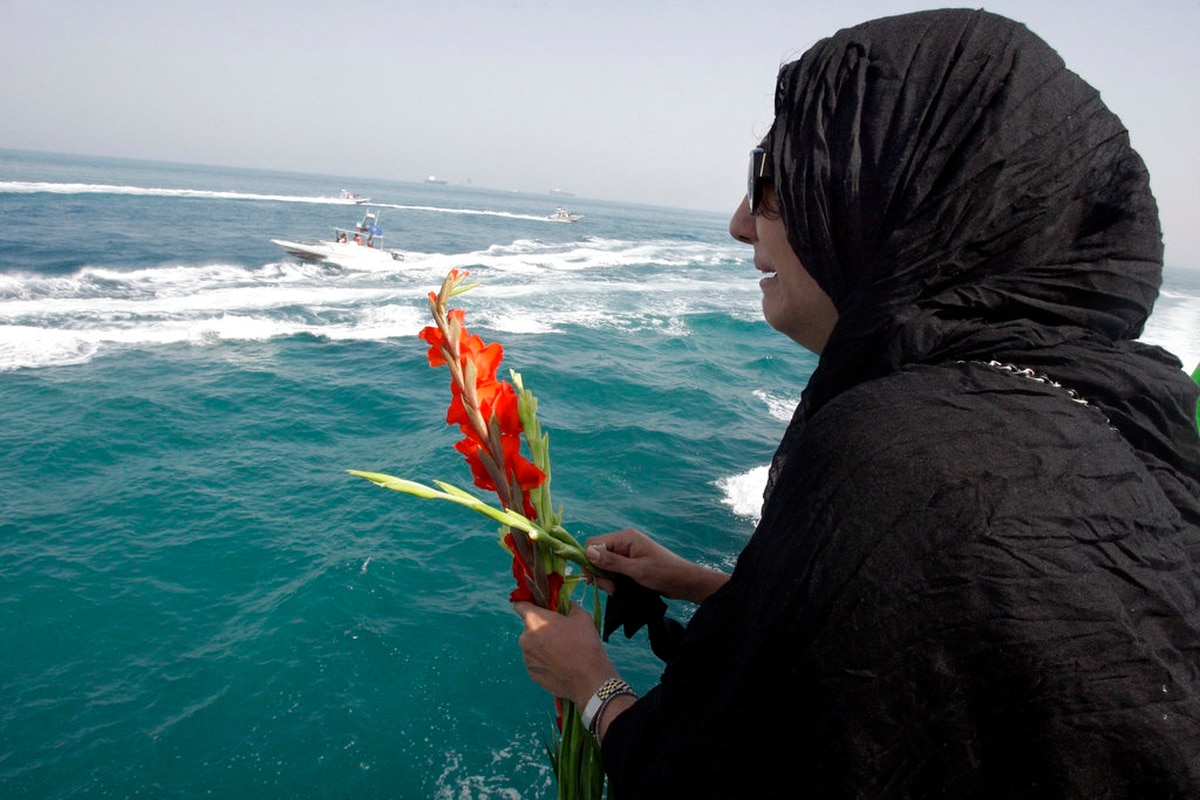 The July 3, 1988, downing of Iran Air flight 655 by the U.S. Navy remains one of the moments the Iranian government points to in its decades-long distrust of America. They rank it alongside the 1953 CIA-backed coup that toppled its elected prime minister and secured Shah Mohammad Reza Pahlavi's absolute power until he abdicated the throne before the 1979 Islamic Revolution.

Today, as Iran grapples with America pulling out of the nuclear deal with world powers, officials linked their current woes to the 1988 disaster, insisting again that the U.S. cannot be trusted.

"This heinous crime is recorded in the memory of the great and brave people of this land and will never be forgotten," Iranian Foreign Ministry spokesman Bahram Ghasemi said in a statement.

Iran Air Flight 655 was a scheduled passenger flight from Tehran to Dubai  that was shot down on 3 July by USS Vincennes, a guided missile cruiser of the United States Navy. The aircraft, Airbus A300, was destroyed and all 290 people on board, including 66 children, were killed

Iran Air Flight 655 was a scheduled passenger flight from Tehran to Dubai via Bandar Abbas.

"I will never apologize for the United StatesI don't care what the facts are," then-Vice President George H.W. Bush told an August 1988 campaign rally less than a month after the incident, widely considered his response to the Iran Air Flight 655 downing. "I'm not an apologize-for-America kind of guy."

○ The Forgotten US Shootdown of Iranian Airliner Flight 655

Looking Back and Looking Ahead | Cambridge U. | . The Formal Investigation into the Circumstances Surrounding the Downing of Iran Air Flight 655 on July 3, 1988, by Rear Admiral William Fogarty, and comments from various sources.

In Iran it was widely believed that the U.S. attack had been deliberate, and Iranian authorities worried that it indicated the United States was planning to join forces with Iraq. That assumption was thought to have played a role in Irans decision to agree to a cease-fire with Iraq in August 1988.

Given the facts of the incident plus the unwillingness of the US to admit to any wrongdoing and therefore the refusal to pay any damages and compensation, on 17 May 1989 the Government of Iran filed a case at the International Court of Justice (ICJ) in The Hague.

On February 22, 1996, after eight years of court proceedings, the United States realized that it could not win the case and to prevent a negative court decision [reign of Bill Clinton to place blame 😉  Oui], it did agree to pay Iran US$ 131.8 million in settlement.