The United States confirmed killing the powerful commander of Iran's elite Qods (Quds) Force in the late hours of January 2 in an air strike near Baghdad International Airport.

The same day, Afghan Chief Executive Abdullah Abdullah expressed his condolences to Iran. In a statement, he acknowledged Soliemani's cooperation with Afghans during decades of war in Afghanistan. Abdullah's statement was not as harsh as his political party's - Jammiat Islami. The lengthy press release on January 3 named Soleimani as a martyr and said the news of his death is received with deep grief and anguish.

Ahamd Zia Masoud, another leader of former Northern Alliance and brother of former legendry Mujahidden commander Ahmad Shah Masoud voiced his support for Iran. The former Vice President said on his Facebook post that Soleimani was an irreplaceable hero.

Jammiat Islami led by former Afghan foreign minister, Salahuddin Rabbani was part of Northern Alliance which fought the Taliban after the September 11 attacks on the United States. Northern Alliance had close relations with Iran. Unconfirmed and undated pictures have emerged on social media that purportedly show Qassem Soleimani with some of the Afghan Mujahiddeen leaders. Most of the former Northern Alliance commanders are ethnic Tajiks who have close relations with Iranians based on lingual affiliations. In Afghanistan, Tajiks speak Dari, a variety of Persian language.

How the U.S. and Iran Became Unlikely Allies Against ISIS | The Intercept - Nov. 2019 |

The Peshmerga are still fighting ISIS militants hiding in the arid, brown Qara Chokh mountain range nearby, and Kurdish forces say they are grateful for periodic U.S. airstrikes on ISIS positions. Kurdish commanders at the base who fought in the Makhmour battle still consider the U.S.-led coalition their best ally, they said. The support Iran supplied to the Iraqi Kurds against ISIS in 2014 is a distant memory, overshadowed by Iran's contribution to the more recent Iraqi conquest of Makhmour.

Iran's MOIS predicted this rupture with the Kurds, though the reasons for the split were not what they had expected. The September 2014 report that bemoaned the lack of coordination between the U.S. and Iran in the fight against ISIS also noted that Tehran's global isolation might force the Kurds to "keep their distance" from Iran when the war was over. "Our country might undergo a bitter experience yet again," the document said, revealing the officer's suspicion of even close Kurdish allies, as well as a note of pathos about Iran's place in the world.

Ultimately, however, a combination of factors led to Iran's renewed isolation. The U.S. decision to pull out of the Obama-era nuclear deal ended Iran's brief rapprochement with the West.

○ Kurdistan Independence: How the War With ISIS Has Exposed Kurdistan's Internal Divisions

Iranian PR Campaign to bolster presence in fight against ISIS in Iraq | The Guardian - Oct. 2014 |

In Iraqi Kurdistan, local officials have admitted that Iran was one of the first countries to provide weaponry, while officials in Tehran have claimed credit for protecting Kurdistan's capital, Irbil.

Amir Ali Hajizadeh, a Revolutionary Guards air force commander, has appeared on national television confirming Suleimani's presence in Kurdistan. "If it wasn't for Iran's help, Iraq's Kurdistan would have fallen into the hands of Daesh," he said last month.

In Diyala, Iran was effective due to the presence on the ground of the powerful Iranian-backed Shia Badr brigade, whose commander, Hadi al-Amiri, is a close ally of Suleimani. 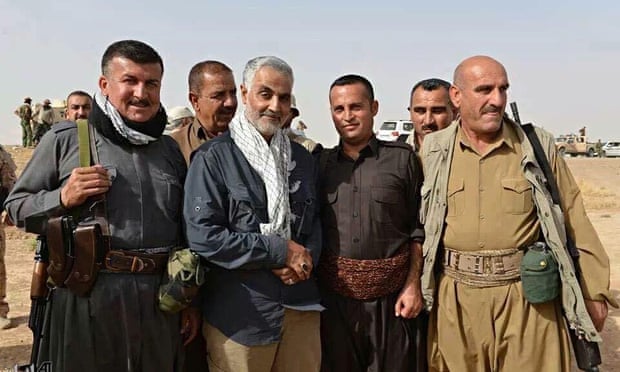 Suleimani and the Iraqi militias he commands have played a key role in halting Isis. But neither he nor any other Iranian official has been invited to next strategy meeting in Washington between the US president, Barack Obama, and military chiefs from 20 western and Arab countries, which aimed to draw up a plan to defeat the militants.

The crisis in Iraq may have created a temporary alignment between the US and Iran, bitter enemies for the last 35 years, but they remain firmly at odds over Syria, where Tehran's loyal support has been crucial in bolstering Bashar al-Assad.

Historic fight with Northern Alliance against the forces of Al Qaeda and the Taliban government forces in Afghanistan.

A rare footage shows meeting of martyr Qassem Soleimani with leaders of Afghanistan in Panjshir valley and after martyrdom of Ahmad Shah Massoud in September 2001.

After martyrdom of Ahmad Shah Massoud, haj Qassem Soleimani kept his contact with leaders of Jihadi groups in Afghanistan and had vital role in designing ground operations against Taliban.

In the liberation of Herat, Quds Corps had a key role and helped Ismail Khan to gain power in Herat.

The ground operations of that time against Taliban would not be possible without helps of Quds Corps in designing and information.

Ahmad Shah Massoud, the military leader of the United Front alliance opposing the Taliban, says he had "second thoughts" about heading a high-powered delegation to the West two weeks ago, but today, as he returns to Afghanistan, he is satisfied about the outcome of his maiden visit to Europe.

He called it a "turning point in the struggle against the Taliban," and their foreign backers, and a "new season in the quest for durable peace," in his embattled country. Western analysts gave him credit for "pulling off quite a coup" in Europe by "enhancing his stature as a political leader," but cautioned that aside from the military and political obstacles that Massoud faces inside Afghanistan, it is not yet clear to what extent the warm reception will actually translate into real support for an uphill battle against a growing network of terrorists and fanatics backed by powerful Pakistani and Arab extremist lobbies.

Ahmad Massoud, son of the "Lion of Panjshir", speaks to a local crowd in Afghanistan, when he launched a political movement to counter the Taliban.(Photo: Philip Walter Wellman/Stars and Stripes)

The Perfect Storm author spent a month with anti-Taliban warrior Ahmad Shah Massoud in 2000. Now he offers his reaction to the recent murder of the Northern Alliance leader--and the subsequent attacks on the U.S.

In November 2000 Adventure sent contributing editor Sebastian Junger and photojournalist Reza to profile Afghan resistance leader Ahmad Shah Massoud. The resulting article appeared in our March/April 2001 issue and has just been reprinted in Fire, a collection of Junger's journalistic work.

On September 9, 2001, suicide bombers killed Massoud. Two days later the U.S. was under attack. Here Junger offers his thoughts on those two days of terror and their implications.

Of the chief cities of medieval region of Khorassan, only Herat still presents a substantial and lively city on its original site, with sufficient architectural remains to convey a sense of continuity with its time as the capital of the medieval Timurid Empire.

Herat owes its existence to the Hari Rud, the river flowing past the city just a few miles away. The river rises in the mountains of Ghor to the east, turns north along the present border with Iran, and eventually vanishes in the sands of the Karakum desert. Along the way it sustains a narrow but fertile oasis, cultivated continuously since antiquity, and flanked by some of the richest grazing grounds in all of Central Asia.

Herat was also a crossroads of commerce: routes ran north along the Hari Rud to Merv and Bukhara, south to Kerman and into Iran, east to Balkh, Samarkand and China, and west to Nishapur and Constantinople. Herat lost its pivotal position in the 1880s with the construction of the Trans-Caspian Railway, which passes far to the north. But it remains a place where the manifold peoples of Central Asia mingle - Tadjik farmers, Turkoman nomads, Uzbeks and Hazara (and in the 19th century there were also Hindus, Armenians and a sizeable Jewish community).