Intervention US Election 2016 ... Not Russia

Roger Stone, a longtime confidant of President Donald Trump who was convicted last year in Robert Mueller's investigation into ties between Russia and the Trump campaign, was in contact with one or more apparently well-connected Israelis at the height of the 2016 US presidential campaign, one of whom warned Stone that Trump was "going to be defeated unless we intervene" and promised "we have critical intell[sic]."

The exchange between Stone and this Jerusalem-based contact appears inFBI documents made public on Tuesday. The documents -- FBI affidavits submitted to obtain search warrants in the criminal investigation into Stone -- were released following a court case brought by The Associated Press and other media organizations. 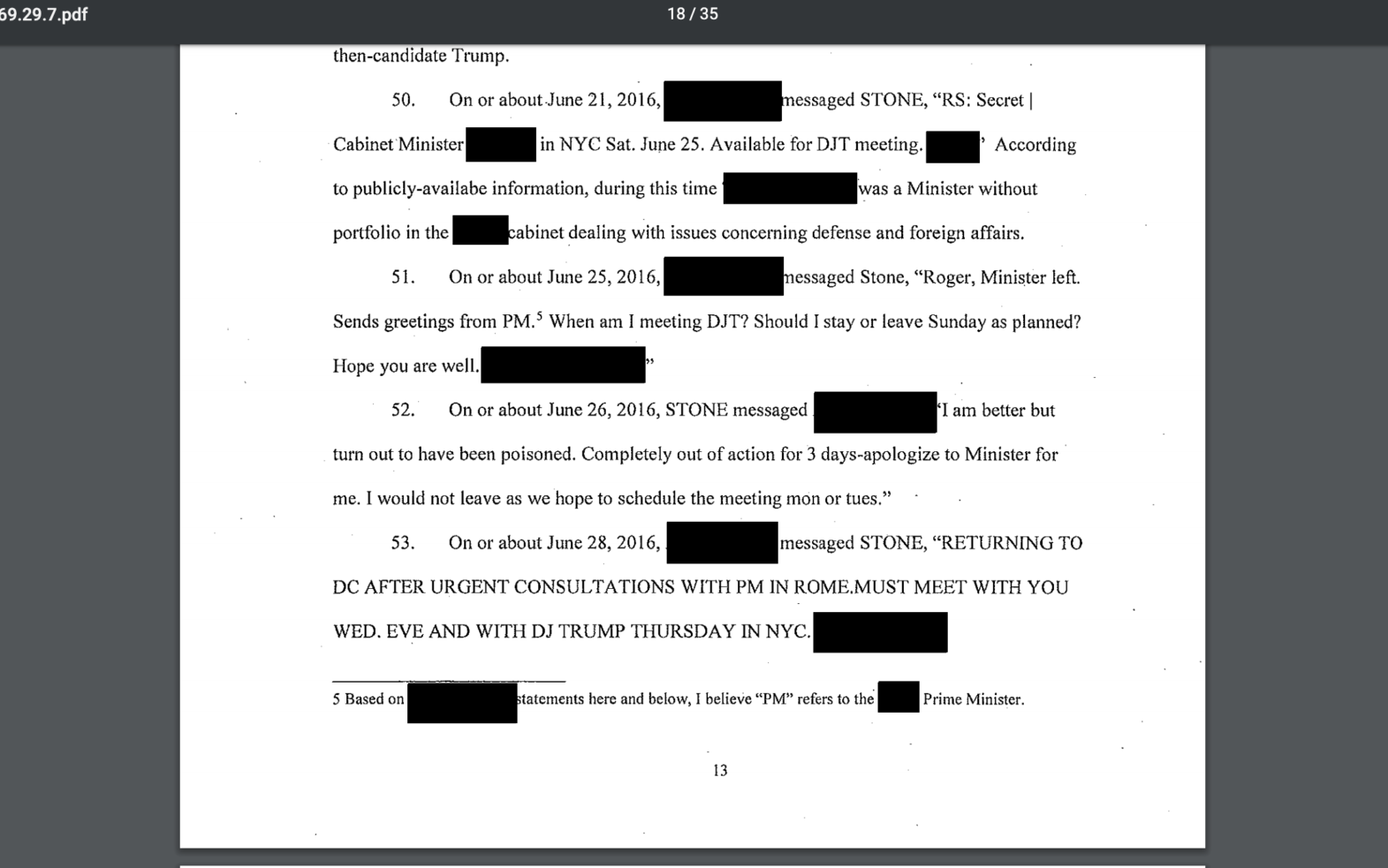 The FBI material, which is heavily redacted, includes one explicit reference to Israel and one to Jerusalem, and a series of references to a minister, a cabinet minister, a "minister without portfolio in the cabinet dealing with issues concerning defense and foreign affairs," the PM, and the Prime Minister. In all these references the names and countries of the minister and prime minister are redacted.

Benjamin Netanyahu was Israel's prime minister in 2016, and the Israeli government included a minister without portfolio, Tzachi Hanegbi, appointed in May with responsibility for defense and foreign affairs. One reference to the unnamed PM in the material reads as follows: "On or about June 28, 2016, [NAME REDACTED] messaged STONE, "RETURNING TO DC AFTER URGENT CONSULTATIONS WITH PM IN ROME.MUST MEET WITH YOU WED. EVE AND WITH DJ TRUMP THURSDAY IN NYC." Netanyahu made a state visit to Italy at the end of June 2016. 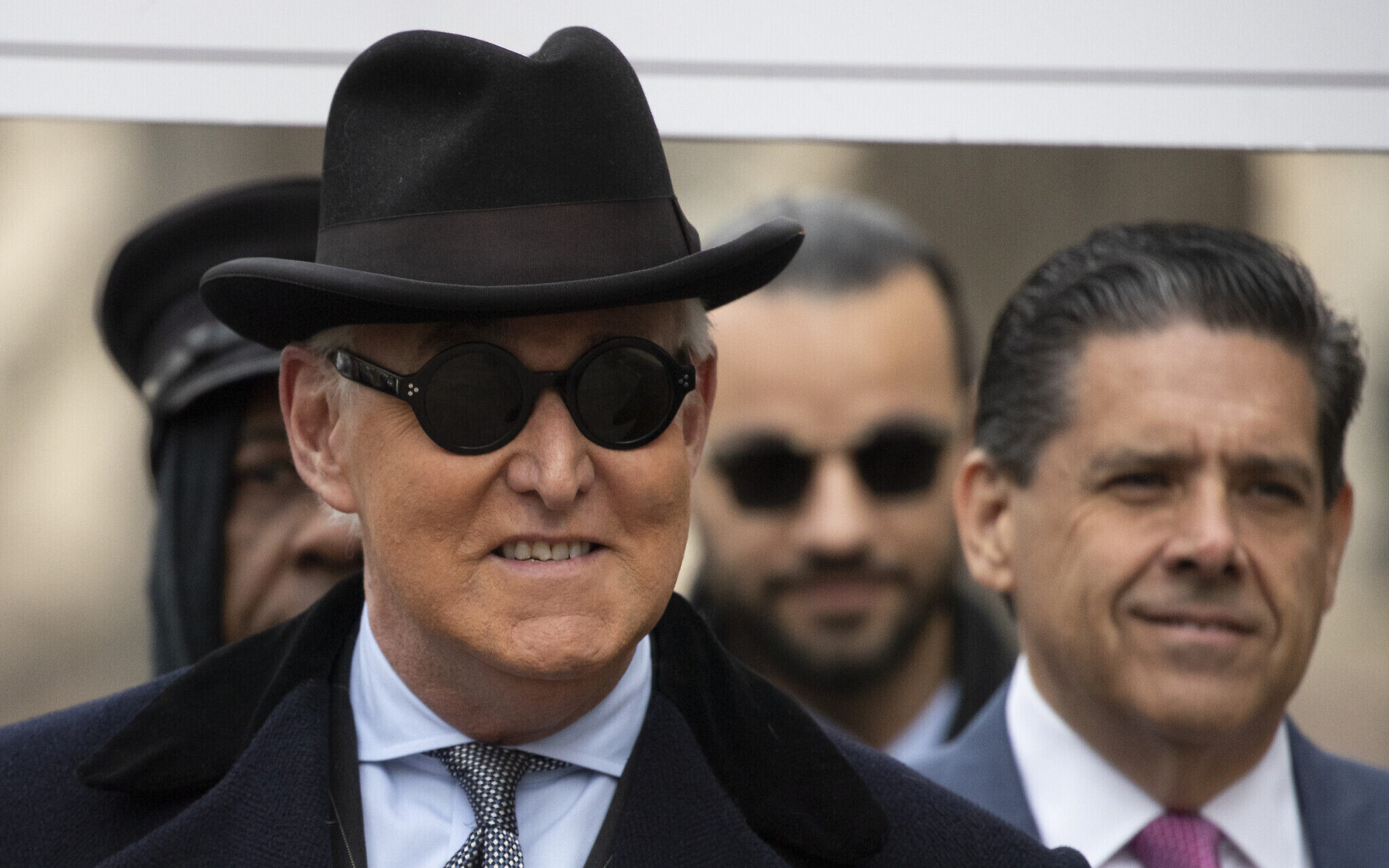 The explicit reference to Israel appears early in the text of a May 2018 affidavit by an FBI agent in support of an application for a search warrant, and relates to communication between Stone and Jerome Corsi, an American author, commentator and conspiracy theorist. "On August 20, 2016, CORSI told STONE that they needed to meet with [NAME REDACTED] to determine "what if anything Israel plans to do in Oct," the affidavit states.

Perhaps most disturbing is Jim Gilchrist's partnership with Swift Boater Jerome Corsi to write a book about Mexico's conspiracy to trash America: [Hat tip to XicanoPwr.]

The notice of appeal, which was expected, came as speculation grew that Trump would issue a pardon to Stone, a Florida resident who remains free on bail two weeks after the judge in his case rejected his request for a new trial.

Stone was convicted at trial in U.S. District Court in Washington, D.C., last fall of seven felony counts related to lying to Congress and witness tampering. Stone lied to a House committee about his discussions with members of Trump's 2016 presidential campaign.

My analysis after the HRC debacle, did MI6/CIA Collude with Chris Steele to Entrap Trump

[Update-1] The Flynn Affair and Turkey or was it Russia?

#FLYNN docs just unsealed, including handwritten notes 1/24/2017 day of Flynn FBI interview. Transcript: "What is our goal? Truth/Admission or to get him to lie, so we can prosecute him or get him fired?" Read transcript notes, copy original just filed. @CBSNews pic.twitter.com/8oqUok8i7m

The always careful ⁦@EliLake⁩ is even more cautious here, but he and ⁦@AndrewCMcCarthy⁩ are pointing in the same direction regarding the case against General Flynn. Wait for the judge, but wow, this is a black eye for the Bureau people involved [_link]