U.S. Intelligence and American policy kept a Cold War intact. Doing a repeat performance, Europe build on Four Freedoms does not get the opportunity to grow from infancy through adolescence to mature as a force for peace. Communism and corruption in the former Soviet Union and its satellite states have been incorporated in Western countries and Israel to its very own detriment. The U.S. and the United Kingdom have led the attack on Russia, a failed state created during the leadership, or lack thereof, of Boris Yeltsin.

America doesn't want an united Europe as a strong economic power and will do the utmost to undermine the union. Bush and Rumsfeld split Europe into Old and New Europe. The former Soviet satellites states were like a warm bun that was easily taken into America's orbit. The allegiance to U.S. military and CIA intelligence came not really as a surprise as America is seen as the liberator of continental Europe and the defeat of Communism. With the Afghan expedition of the U.S. and NATO, many ugly abuses of human rights were seen as "acceptable" for the right cause to defeat the Islamists. Terror became the great evil across the globe and most nations in the NATO alliance left no stone unturned to cooperate.

Torture of prisoners, rendition across the globe run by the CIA, got open support from many U.S. allies. The strong ties of Eastern Europe to U.S. military and its intelligence became a strong bond above the legitimacy of being a member of the European Union.

The ugly propaganda machine with Anglo-Saxons leadership of the U.S. and U.K. was quite effective. After Afghanistan the world was led into the Iraq invasion and occupation. Under Obama, the Arab unrest - food and jobs - led to uprisings which were exploited by the West and ultimately NATO nations intervened in Libya and Syria. As was seen before in former Yugoslavia, arms and mercenaries (jihadists) were transported into the region. This scenario has become common good in the years since. An important role for the illegal arms contracts, transport and distribution was coordinated by American intelligence and its allies. Eastern European countries have played an important role in illegal arms distribution to warring parties across the world for decades.

Czech-Russian Relations Headed for `Beyond Catastrophic'

While the authorities do not seem clear on how the depot was blown up, they are convinced that it became a target for Russia because it was storing weapons that a Bulgarian arms dealing company called Dunarit was due to ship to Ukrainian forces fighting Russian-backed rebels in Donbas.

...
The news of the alleged GRU operation saw the Czech Republic's NATO and EU allies express support. A NATO official told Reuters that the case is another example of Moscow's dangerous behaviour. Germany, Poland and Ukraine have also made statements.

It is now understood that the Czech attack was a missed warning. Following the Vrbetice explosion, the focus moved to Bulgaria.

Like Skripal, Emilian Gebrev fell into a coma after being poisoned in an attack in Sofia in April 2015. The Bulgarian arms dealer has since fought the authorities in his home country to have it properly investigated.

It's never good news for the rule of law when an oligarch sends armed men in combat fatigues to occupy a state-owned oil company. That's what just happened in Ukraine, where billionaire oligarch Igor Kolomoisky appears to have sent members of his private army last week to temporarily take over the offices of oil company UkrTransNafta in order to protect his financial interests in the company.

The situation may be even more frightening than it sounds.

Bands of thugs that became armies

Kolomoisky funds and directs a large private militia that has been helping the Kiev government fight against the pro-Russian separatists in eastern Ukraine. Militias like his -- and there are dozens of them -- are a source of deep concern to analysts who believe they could threaten Ukraine's long-term stability.

Are these private armies willing to follow Kiev's orders without question? Or will they go their own way when their own interests are at stake? Kolomoisky's antics at the oil company's offices, in which he appears to have used his private army to protect his personal financial interests, look an awful lot like the latter.

...
One more crucial unknown factor is whether oligarchs like Kolomoisky would be willing to give up their ties to militias and the power they bring -- and how they might respond if the Ukrainian government moved to disperse their groups.

The militias themselves might not go quietly, either. In early February, when Poroshenko was rumored to be considering disbanding the Aydar Battalion, the group marched on Kiev. Its fighters blocked access to the ministry of defense and burned tires outside its gates until Poroshenko backed down. In September 2014, the Guardian's Shaun Walker embedded with the Azov Battalion in Mariupol and found "almost all to be intent on 'bringing the fight to Kiev' when the war in the east is over."

US Policy of Military `Re-alignment' and Obama's Military Think-tank | Dec. 2015 |

The Pentagon's battle against ISIS relies on an Eastern European arms supply-line operated, in part, by firms and executives linked to fraud, foreign bribery, Bulgarian organised crime and the death of a contractor.

Following the sting, Morales was indicted alongside 21 others for bribing a foreign official but the trial in Washington DC collapsed in 2011 as a series of juries struggled to reach verdicts.

Today, his new firm, Global Ordnance, is one of the most important players in the Pentagon's supply-line arming Syrian rebels fighting the Islamic State in Iraq and Syria, ISIS.

He and 13 other US contractors are competing to secure a slice of up to US$ 2.2 billion worth of Soviet-style arms and ammunition to be delivered to the rebels by 2022, sourced mostly from state-owned arms producers based in the Balkans and Eastern Europe and often negotiated over drinks and dinners in the restaurants and bars of Belgrade, Budapest and Bucharest [see gallery].

The firms were selected, vetted and contracted through two channels: the Picatinny Arsenal, a New Jersey military base, and the Pentagon's Special Operations Command, SOCOM.

...
Leaked flight cargo documents also reveal that SOCOM accepted direct deliveries from a Bulgarian firm Algans, which was investigated for its involvement in the deadly blast and whose owner is the former business partner of a notorious organised crime figure. One set of deliveries was received by the Pentagon after the fatal explosion.

And Heinrich Thomet, a businessman at the centre of a scandal involving the Pentagon's supply of ammunition to Afghanistan from Albania in 2008, is again involved in providing the US government with munitions through one of its blue-chip contractors, UK defence giant Chemring.

The findings raise questions about the Pentagon's vetting process, according to an expert interviewed by BIRN and OCCRP.

But while the Pentagon can decide to bar companies from bidding for contracts based on previous convictions and, in some circumstances, allegations of wrongdoing, it is not obliged to do so.

Pentagon spokesman Mark Wright said contractors were subjected to a "rigorous vetting process." This includes checking the quality and source of the arms and ammunition to avoid supplies from "unapproved sources" such as North Korea, Iran and Syria.

Revealed: The Pentagon Is Spending Up To $2.2 Billion on Soviet-Style Arms for Syrian Rebels | OCCRP - Sept. 2017 |

#Oped "It is hard to know which is more surprising: the timing, the scale of the Czech response, or the operation itself," @MarkGaleotti writes of the fatal depot explosion story [_link]

German laws, however, dictate that licences to transport weapons must be accompanied by end user certificates which states the final destination of the shipment and who will be using the equipment.

According to the German government, no such licence has been issued for deliveries to Syria or neighbouring countries since 2010.

This claims jars with a report in the Serbian press in December 2015, revealing that a number of US air force C-17 cargo planes had delivered Serbian weapons to the Ramstein airbase.

The report was backed up by one of SOCOM's most important contractors on its Syrian contract, Global Ordnance, which shared the story on Facebook adding: "Glad Global Ordnance could contribute to support our military!" 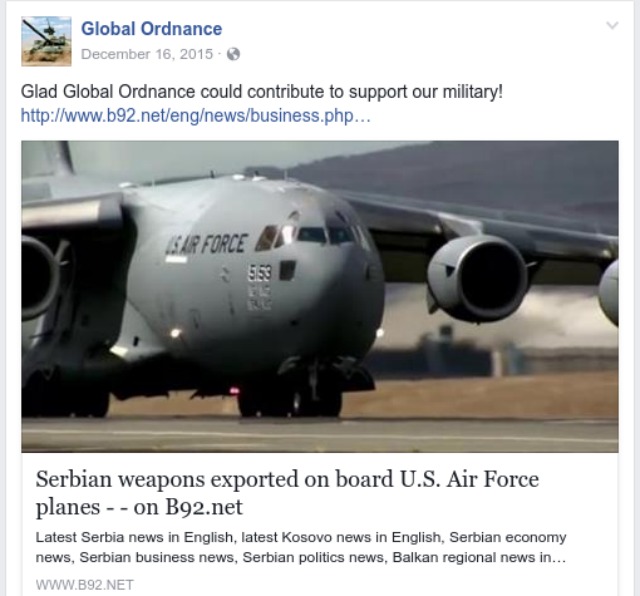 More from SOCOM and Iraq War ...

The 99-tonne cache of AK47s was to have been secretly flown out from a US base in Bosnia. But the four planeloads of arms have vanished