Criticism and protest should be genuine based on human rights, not used as a tool of propaganda for a political goal or commercial profit.

There is a historic link between colonialism and oppression of minorities. Today in the 21th century, it's universal and there should be a major effort to clean house first. Hypocrisy in policy set by politicians is so very obvious it is quite ridiculous. What's often missing is historic content.

So Joe Biden is the first president to call Armenian genocide ... genocide!

With casualties rapidly mounting in and around Nagorno-Karabakh, the Trump Administration needs to call the leaders of Armenia and Azerbaijan immediately to de-escalate the situation. It must also demand others -- like Turkey -- stay out of this conflict. [_link]

Western powers sidelined as Russia and Turkey use sway on local players to boost influence and send in peacekeepers.

Map of the Ottoman Empire detailing the deportation and mass killings of Armenians in 1915-1917 pic.twitter.com/nTdSXEoe6x

A second view on indigenous peoples, minorities, oppression in order to prevent independence. The sudden attention about the fate of Uyghurs kind of surprised me, so I attempt to do some elementary research.

The Dzungar Khanate, also written as the Zunghar Khanate, was an Inner Asian khanate of Oirat Mongol origin. At its greatest extent, it covered an area from southern Siberia in the north to present-day Kyrgyzstan in the south, and from the Great Wall of China in the east to present-day Kazakhstan in the west. The core of the Dzungar Khanate is today part of northern Xinjiang, also called Dzungaria.

Qing dynasty at its height, 1820 (25th Year of the Jiaqing Emperor) pic.twitter.com/wSOptBaO0c

Driven Dzungars out of Outer Mongolia, Qing allowed Khalkha Mongols to return to their homeland. Qing Empire now marked Dzungar Khanate in its crosshairs. 1st Qing driven off Dzungar invasion of Tibet, incorporated Tibet into the Empire in process. Then Qing attacked Dzungars.

The Dzungar genocide (Chinese: 準噶爾滅族) was the mass extermination of the Mongol Dzungar people, at the hands of the Qing dynasty. The Qianlong Emperor ordered the genocide due to the rebellion in 1755 by Dzungar leader Amursana against Qing rule, after the dynasty first conquered the Dzungar Khanate with Amursana's support. The genocide was perpetrated by Manchu generals of the Qing army sent to crush the Dzungars, supported by Uyghur allies and vassals due to the Uyghur revolt against Dzungar rule.

There will be a follow-up diary about the Turkic populations stretching from Ankara to Xinjiang province.

In the meantime colonizing the New World of the America's - filling the void with new people from the European continent after the landing of the Pilgrim Fathers.

I first became interested in California Indian history because I was trying to figure out how could it be that men from the eastern part of the United States who had lived lives presumably as upright citizens, could come into California and commit such acts of unconscionable cruelty.

Men, who had never seen an Indian before in their lives, record in their diaries how anxious they are to shoot one. And sometimes finding one to shoot just for the fun of it, so they can write back a letter that they had done so. How could this be? And how could men engage in these acts of mass extermination?

And I came to realize two things. One, that this was a product of their own greed; that they came to California with great avarice. Of course, they were coming here to get rich quick. And they were frustrated men, because they were not getting rich quick, and they're looking for someone to blame. What is the cause of my own failure? It's not me. It's someone else's fault. And usually that blame fell with lightning speed on the native people. They were in the way. They were blocking my success.

And that other quality, that sense of utter dehumanization, of regarding these people as being barely human beings, or in some cases not human beings at all. Their diaries are filled with references to the Indians of California as snakes and toads and skunks and lice and vermin, always trying to communicate -- to convince themselves, perhaps -- that these were not truly their brothers and sisters.

The natives are mostly living in "reservations" only to be booted out now and then when a great mineral find is discovered.

Uranium mining and the Navajo people

Native Americans secured an important victory in Geneva in September 1977. The United Nations held a Conference on Discrimination Against Indigenous Populations in the Americas, which succeeded in pressuring the US and other governments to recognise these peoples' special status. 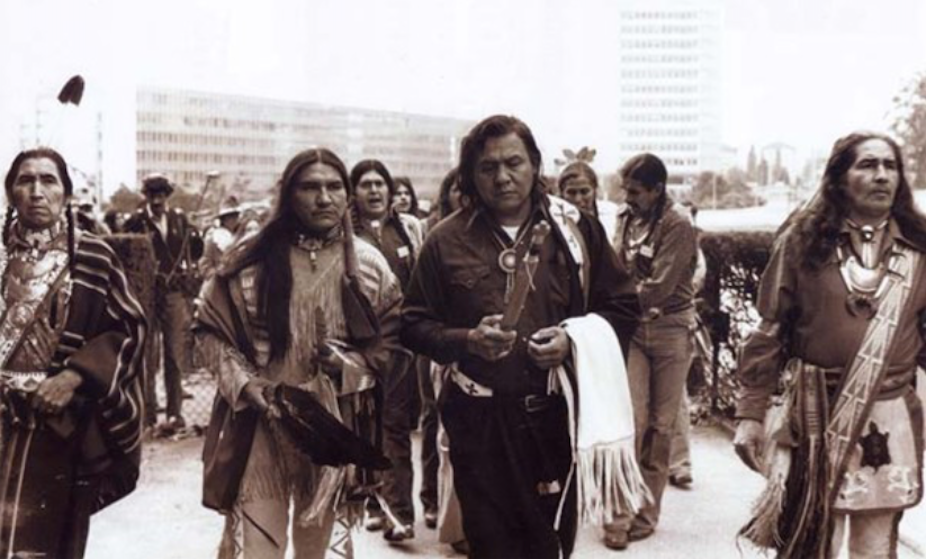 This led to a global regime of indigenous human rights that drew a line under a period of overt discrimination against Native Americans in the US - even if the results were far from perfect. Forty years on, Indian rights are once again backsliding alarmingly and there is again a need for international help.

In the 1970s, Native Americans were staring cultural death in the face. The US government's termination policy of the 1950s had sought to disband the reservation system and force Indians to become part of modern society.

The government had ended federal protection over more than 100 Native nations, removed their tax-exempt status, withdrew financial assistance and scrapped services like education and health. Reservation land was reduced in size and cut up into individual parcels that could be bought and sold.

Thousands of Indian families who moved to big cities with the government's relocation programme received too little assistance, and experienced discrimination in housing, the job market and the justice system. As a result, many sank into poverty, crime and disease.

Many Indians fought termination in the federal courts, and President Nixon announced a change in policy towards self-determination for Indian tribes in 1970s. Yet a cohort from the 1960s Red Power movement believed their peoples' plight still needed a forum above the level of national government. This was because, they argued, their problems arose out of centuries of colonisation by settlers from European nations.

Indigenous Peoples' Day will be celebrated across the America's on the same date as Columbus Day.

Quite similar to Palestinian anguish on Nakba Day, a memorial not a celebration.

Racism and discrimination in American culture of violence and oppression - a flaw of pure Capitalism?

#Redskins take a big lead into the 4th. #NOvsWAS