Being a craft brewing aficionado, Helen wouldn't have approved, but in her honour I have decided to tell a brewing related yarn...

One of the stories I have never seen told anywhere is the development of the modern "Irish Pub" concept, surely one of the greatest marketing successes of all time, precisely because it isn't generally recognised as a marketing story in the first place.

Irish pubs have of course existed for centuries in Ireland and countries with concentrations of Irish emigrants. But it first became a commercial marketing concept in the early 1990's when Guinness sponsored a programme to encourage the development of Irish themed pubs on a grand scale. Today there are many thousands of "Irish Pubs" all over the world, and as a retail category it has become as ubiquitous as an Italian Pizzeria or an American burger joint.

My involvement in the project was a relatively marginal one, and I would love to hear the stories of those more centrally involved in the project. The 1980's was a time of austerity in Ireland and sales of Guinness Stout, in particular, were falling in our core markets. We had anecdotal evidence that younger drinkers were preferring lager to the traditional stout, and that even people who switched to lager for the summer weren't switching back to Guinness in winter as faithfully as previous generations.

The Guinness marketing department decided to do some research into the phenomenon and hired an outside behavioural consultant by the name of Martinko for the project. I was a junior staffer in the Internal consultancy department at the time and was seconded to the project because I had a degree in Sociology, a somewhat exotic qualification in Guinness at the time.

The research project design was relatively simple. Unlikely traditional market research which asked potential consumers what they thought of a product in a blind tasting or product demonstration, we were to observe what where the objective factors which determined the probability of a customer ordering a Guinness when they walked into a pub in Ireland.

To cut a long story short, three prime factors were observed: Firstly, what was everybody else drinking when they walked into a pub? If there were many pints of Guinness in evidence on the tables, a new customer was far more likely to order a Guinness, presumably on the premise that this was a good pub for a Guinness.

The quality of draught Guinness could be somewhat variable in Irish pubs at the time, depending on how often and how well the beer lines were cleaned. Publicans were also expected to "clear their lines" on opening by wasting the first couple of pints of the day as it would have been sitting in the beer line from Keg to tap all night and possibly exposed to oxidation. Not only did some publicans not do this, but the less conscientious could also sometimes add "the slops" back into the drink they served. This was the head and beer that had been scraped off the top of overfilled glasses, and which could be prone to oxidation and contamination.

This resulted in the development of mystiques about good pubs and bad pubs for a pint. Besides developing a technical line cleaning service, Guinness also encouraged the development of a mystique around the pulling of a good pint and its presentation to a customer. It gave the "the pint of plain" the aura of a fine French wine, where only the cognoscenti could divine the difference between good years and bad, good vineyards and bad, and even which side of a valley the grapes had been grown. (It was a time of many awful wines being sold on the less discerning Irish market)

The second factor influencing whether a new customer walking into a pub ordered a Guinness or not was whether the décor was traditional or modern. At the time, many Irish pubs were upgrading their sometimes austere furnishings with modern interior designs and carpets, sofas and soft chairs and charging more for drinks with a more upmarket image. If you wanted to fit in, the least you could do was order a lager, if not a G&T or cocktail in the more fashionable joints. Many more premium or "upmarket" lagers were being launched into the market, and tended to outperform brands which were marketed on the basis of value for money.

The third factor was whether a customer was prompted to order a Guinness or not. We paid sympathetic or cooperative barmen to make a suggestion like "It's a good day for a Guinness," or "a Guinness would go well with that" to customers ordering a meal. Sales of Guinness shot up during the times when this "promotion" was being run, and settled back to normal levels at times when barmen were specifically asked not to make a suggestion.

None of these findings were earth shattering or surprising to those professionally engaged with marketing the brand, but they did help make a "scientific" case for spending big to address the problem. At a time of a huge focus on cost cutting in the production side of the business, I was surprised to learn that the marketing department had gained Board Approval to spend millions on producing designs for "traditional Irish pubs" and buying "aged antiques" and furnishing to provide the authentic feel of an Irish pub familiar to old time Guinness drinkers.

A package was developed for young entrepreneurial barmen and publicans wishing to set up "an Irish Pub" anywhere in the world. Not only would Guinness help with acquiring all the technical equipment required, but it produced 5 thematic designs for a number of different styles of pub with all the required accoutrements for the interior design - old advertisements, brass fittings, agricultural paraphernalia, "antique curiosities," dark wood furnishings, as well as the standard beer mats and fridges.

Of course, there is more to "an Irish pub" than the interior design. A consultancy service was provided to help with the intangibles of creating a convivial and congenial atmosphere: Traditional Irish music, training courses to facilitate the creation of an engaging staff etiquette, pub based quizzes, golf clubs or social societies as well as the standard quality control and pint pouring procedures. When he was retiring, a public relations colleague appropriately named Billy Porter once reminded all present - predominantly production orientated staff - that we weren't so much in the beer production business as in the entertainment industry. The point was our customers had to have a good time, and the liquid we produced was only a small part of that.

I sometimes tell the story of a harrowing experience I had on holiday in Mozambique. Based near Durban, I had driven north through Kwazulu Natal, Eswatini and southern Mozambique as part of my "research" of suitable locations to bring my family, due to join me shortly. For the first time in my life I had come across mass poverty, children suffering from Kwashiorkor with swollen belies; corrupt policemen at almost every cross roads demanding bribes to let me pass because my "paperwork was not in order"; armed guards at every house in the posher suburbs of Maputo.

I stopped off at a seaside resort for somewhere to stay for the night and dropped into the local hostelry, run by a South African as it turned out. I marvelled to the proprietor that some of his local customers were drinking Whisky, a drink I would have considered a luxury at the time. "Not only that", he said, "but I have a stock room full of cheaper brands like Bell's which I can't sell. They all want the Johnnie Walker which costs almost a month's salary for the average local".

Apparently, they were buying not so much the liquid, but the lifestyle they had seen featured in Johnnie Walker advertisements - of beautiful ladies sipping Johnny Walker by the pool in the company of handsome wealthy men. Apparently, they felt the same way about motorbikes, it had to be an upmarket brand. Only a life of crime could support those lifestyle choices in that economic environment.

I never quite felt the same way about marketing after that. But the moral of the story is that Guinness realised they were selling not just a liquid, but an experience, and a large part of that was creating a comfortable and convivial atmosphere where bar staff and fellow patrons engaged with you, and you could have a good social night out even if you were travelling on your own.

Success has a thousand fathers and defeat is an orphan. My role in the development of the Irish Pubs concept was a small one, but I would love to hear the stories of those more centrally involved in the project. Of course, like any successful marketing idea, it has metaphorized into just another retail category, often run by large chain operators, and then about as Irish as a Vietnamese diner.

But I think the original idea - helping entrepreneurial Irish publicans and barmen set up successful businesses around the world had a touch of Genius about it. It also helped revitalise an ageing and unfashionable traditional brand into an iconic one that even those who don't like the brew can appreciate in the context of a convivial drinking or dining experience. It's about breaking down our natural reserve and anxiety and letting our humanity pour out. 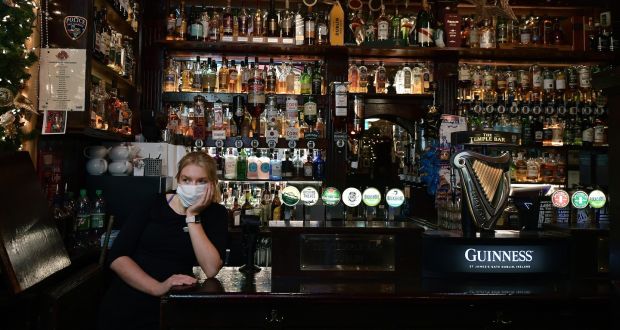 It's getting harder and harder to stand out in a crowded drinks market, and Covid-19
will make the challenge all the greater.

Two Views from USAmerica on the Ukraine/Russia Situation