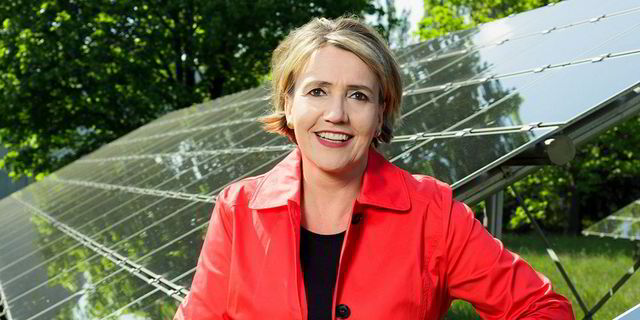 'The Energiewende is back':
German green power sector and
investors thrilled by coalition treaty

Add at least another decade. Privatisation and liberal policy from the EU in Brussels has caught us in this mess. Don't expect a solution that combines green energy transition and zero-emission goal anytime soon.

It will take at least ten years to build new infrastructure such as high voltage transmission lines.

Too much electricity For some years, there has been a push for greener energy to help combat climate change. Last year, the Dutch government accelerated the closure of the last coal power plant in the country and all are slated to be shut by 2030.

However, the production of electricity from green sources, wind farms and solar panels, sometimes pushes a glut of electricity onto the grid. Government subsidies exist, for example, to place solar panels on private roofs and the Dutch system buys back electricity at a rate equal to the sales price.

What the government hasn't done, says Schut, is to incentivise electrical storage capacity. `You should also subsidise storage, like a battery in a solar park. Congestion is in specific places. You can also solve it locally with batteries,' he told Nieuwsuur.

There is also reportedly a labour shortage. In the coming years, the sector will need 3,500 new technicians to work on the electric grid and there aren't enough people qualified to do this work, according to Schut.

Joint Declaration of Intent between Germany and The Netherlands in relation to further energy co-operation regarding grids and electricity transmission - Oct. 2019

Masters in research and writing extensive reports how the future will be reached ...

We are proud to present this extensive summary of the `The Energy System of the Future' study. In it, experts from our respective organisations paint a detailed picture of the various paths that the Netherlands could choose to achieve a fully climate-neutral energy system. An integrated system that interconnects not only all energy carriers, but also all potential consumers and producers, who play a key role in developing the future energy system. The major electricity surpluses and shortages that we will face due to the weather dependency of sources of renewable energy are a big challenge in this context. At the same time, however, the required modifications will offer great opportunities for innovation, economic development and the job market. In this system, network operators and parties from across the market will continuously complement each other in a flexible way.

Transmission Capacity: TenneT invests heavily in further innovations, efficiency and cooperation/partnerships to meet the challenges of the energy transition.

Gasunie and TenneT hereby present their first Infrastructure Outlook 2050, which is the result of a joint study on the development of an integrated energy infrastructure in the Netherlands and Germany. It takes the target of the Paris Agreement (COP21), to achieve a 95% CO 2 emission reduction by 2050, as its starting point.

As mentioned in the Dutch Draft Climate Agreement, Gasunie and TenneT will begin an explorative infrastructure study for the period 2030-2050 in cooperation with regional grid companies later this year. This study will be used as a basis for agreements on investments in infrastructure between network operators and governments and will be published in 2021.

To further analyse the infrastructural needs for the period 2030-2050 in Germany, TenneT has invited the IAEW energy research institute of the University of Aachen to make an in-depth analysis of the future national energy system. Gasunie Deutschland is involved as an important stakeholder, providing the gas expertise. Results of the already ongoing study are expected for mid-2019.

We expect that this Outlook 2050 will contribute to a better understanding of the current and future possibilities for the development of a sustainable, reliable and affordable future energy system.

Similar to the Covid-19 pandemic, the government knew it was coming, yet unprepared and no plan was in place.

Long live Libertarian economics of Mark Rutte, society is based on trust in private genius and innovation. The government should stay out of care for the needy of prevention of mental illness, energy poverty. Some will unfortunately fall by the wayside.