"We are all peakists now" - former US Sec' Energy

At the recent Association for Peak Oil&Gas conference in Cork, Ireland, former US Secreterary of Energy, Secretary of Defense and Director of the CIA, James Schlesinger, told the audience that "We are all peakists now".

The world has changed a lot in 40 years

And Swedish top students know less about it than chimpanzees do.

A positive US media report on France. How extraordinary!

CBS 60 Minutes reports on, well, you know what they report on. 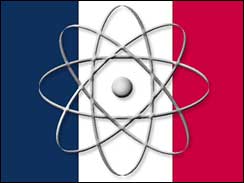 During his whole career as Swedish PM (1996-2007), social democrat Göran Persson had regular and secret interviews with TV journalist Eric Fichtelius. The several hundred hours of frank material were condensed into four one-hour programs, of which three has of yet been broadcasted.

On top of this several hours of extra material have been posted on the state television web site, and that's where I found this goodie which includes, like DoDo commented, "Energy dereg, SocDems who swallowed neoliberal ideas, the takeover of the EU ideal by the marketistas, silly goings-on in the EU Council".

edifying stuff from the diaries. -- Jérôme

The real Europe ends at Oder?

A new-generation nuclear reactor has been approved and is set for construction on the Normandy coast, one of only two new reactors being built in Europe.

A modest proposal to spread the profits of Globalization

Labor is labor and capital is capital, and the two shall never meet. Right?

It certainly seems so, with globalization giving rise to ever higher corporate profits while wages in developed countries have been rather stagnant for quite some time (while hundreds of millions of dirt poor people have become just poor and are getting better off as we speak).

Should we fight globalization if we believe it hurts the interest of workers in Western countries? No. On the whole globalization is making the total wealth greater and the standard of living better. But as with all structural changes which we have grappled with before, the question is: how do we adapt and transfer wealth to make sure no one becomes a loser in the brand new world?

And this is where my modest proposal comes in.

Last Throw of the Dice

In a parallel universe, I received a wire last week from the Executive Mansion. Would I meet with First Citizen George X. Bush (Jefferson had won the 1796 election) to advise him on the war in Mesopotamia? Being a Small Endian, I was somewhat surprised to be asked to meet with a Big Endian First Citizen, but of course I telegraphed back that I would.

It was commonly thought that the war in Mesopotamia was not going well. We still had no effective answer to the Mesopotamians' war elephants, and our legionaries were getting squashed on too regular a basis. I had said publicly that we ought to give it up and go home, which made the invitation to the Executive Mansion all the more surprising. First Citizen Bush had to know what advice I would give him.

We met last Friday afternoon, in a gathering that included a few other opponents of the war besides myself. The First Citizen asked what we thought he should do in Mesopotamia, and we all told him we should get out as fast as we could, leaving lots of large caltrops on the roads behind us as we left. Then First Citizen Bush threw us a curveball.

"You've said just what I expected you to say," he told us. "Now I want to ask you a harder question. I'm not going to pull out of Mesopotamia, at least not yet. I have decided on one last throw of the dice, one last attempt to win this war. What should that be?"

The Implications of Le Pen's Electoral Strategy in France

To be sure, Nicolas Sarkozy and Ségolène Royal remain the most likely winners of the presidential election's first round on April 22, 2007. However, Jean-Marie Le Pen's chances to cause a new surprise after his 2002 stunning success are now higher than originally thought.

The two months before the polls will be decisive. Le Pen's attempts to win the sympathy of those still undecided will likely cause him to use all of his tactical ability -- both through the media and in a more direct relationship with potential voters.

Although the establishment continues to scorn the National Front and its national-populist culture, the Socialists may be secretly happy that a strong Le Pen could prove capable of absorbing Sarkozy's political space on the right.

From the Power and Interest News Report.
Read more... (11 comments, 750 words in story)

How To Win In Iraq

Courtesy of the War Nerd at the eXile.


Still, there are a few ways of doing CI [Counter Insurgency] that do work. I oughta give an evil cackle right about here, like the evil wizard offering the hero a way to get revenge, because none of these ways are noble, or pretty, not the stuff you want on your resume. And some are very risky, too. Try them at your own risk.

Amazingly, yesterday a journalist wrote something profound in my morning paper.

The part about the differing discount rates used in the Stern report and those used by the market he probably copied from the Financial Times, but he continues with that thought until it transports him to an interesting conclusion.

Nuclear Dawn in the Gulf, and beyond While most people reading this will immediately think of the Iranian nuclear reactor under construction at Busherh and the alleged Iranian nuclear weapons program, this article is about something else entirely. Without most people noticing it, the Arab world is following practically everyone else in the rush for nuclear power as the price of petroleum has stabilized around $60 a barrel.

Russia has formally adopted a 43-billion-euro (EUR) (54 billion US dollars) two-stage nuclear energy development programme that aims to increase nuclear's share of electricity generated in the country from 15.6% to 18.6% over the next nine years.

I can't imagine a better way to spend those oil dollars.

A second dawn for nuclear power.

Nuclear power can be cool. If all commercials were this good I'd watch TV a lot more often.

Investing in Energy and Metals

A famous Swedish fund manager once told me that the most important thing when it comes to investing in funds and shares is to only invest in companies and trades that you understand. If you can't understand how company X is supposed to make money, avoid it like the plague.

Now, I think I have some basic understanding of how energy markets are going to work in the coming years (peak oil basically) so I decided I should move some of my savings into energy funds now that the price of oil has fallen a bit. The only problem is that these funds often have quite a big part of their money invested in mining, metals and other commodities. And I have no idea how metals work.

So I decided I should try to find out.

from the diaries. - Jérôme

What really happened to m/s Estonia?

12 years ago, the ship m/s Estonia sunk. 852 people were killed, mainly Swedes, Finns and Estonians. There have been many conspiracy theories about this, mainly because the study which was supposed to say what happened was obviously either a uselessly incompetent study made by very competent people, or a coverup.

A great primer written by We Support Lee with lots of pretty graphs. 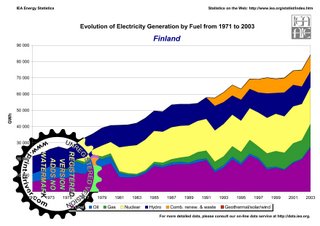 From my favorite conservative American web resource, the Defense and National Interest.

The article is really good and you should all read the whole of it, but here comes some excerpts to entice you.

Currently, American citizenry is neither alert nor knowledgeable and if that situation is not changed fast, the United States of America, as we know it, will decline and fall and fade away; and Columbus will have to do the whole damn thing all over again.

The alliance of hawks and environmentalists is new but not entirely surprising. The environmentalists are worried about global warming and air pollution. But Woolsey and Gaffney--both members of the Project for the New American Century, which began advocating military action against Saddam Hussein back in 1998--are going green for geopolitical reasons, not environmental ones. They seek to reduce the flow of American dollars to oil-rich Islamic theocracies, Saudi Arabia in particular. Petrodollars have made Saudi Arabia too rich a source of terrorist funding and Islamic radicals.

One should take allies wherever one can find them.

Every now and then you read something so profoundly stupid that you just sit there as your jaw hits the keyboard. Like this article.

Natural petroleum is a limited resource, but producing synthetic petroleum in the lab is easy. The Germans were making synthetic diesel for military use in WW2. With enough cheap energy, it can be done with no raw materials but water and carbon dioxide.  Best yet -- the process is carbon neutral... the CO2 generated when the oil is burned is equal to the CO2 used to produce it.

Wow, yeah. Every one knows that when the oil crisis arrives (which won't happen, see above) energy will become so extraordinary cheap we will be able to extract coal from carbon dioxide in the air and make diesel out of it.

And they wrote that just after bantering about abiotic oil. Phew.