Baker & al paper "Are Protective Labor Market Institutions at the Root of Unemployment? A Critical Review of the Evidence" page 5 cites OECD unemployment rate by sex and age: for example for male 25-54 the unemployment rate is 4.6% in the USA and 7.4% in France. The paper then continue using the employment measure without any further questioning of what the unemployment number means.

This puzzle was shown to Baker in january 2007 and inserted into french and english wikipedia - where it is still present after many edits.

Raymond Torres, Head of the Employment Analysis and Policy Division, OECD, said to Le Monde (french newspaper) in may 2007 that "unemployment was a less and less relevant indicator to judge the job market efficiency".

Yet, as shown in the Baker paper, even economists who challenge the orthodoxy do not mention this piece of data when doing cross country so called "unemployment" surveys.

Libération, a french daily newspaper, is putting the french housing bubble on its front page in this morning edition.

But there's something they won't tell you.

An interesting experiment in education

Wikinews interview of Robert Cailliau (co-creator of the WWW) is full of interesting anecdotes.

Migeru was surprised a few days ago when I said some authors asked public libraries to respect the author right to stop free lending of books.

As everyone knows lending books is the worst kind of theft and if it's not stopped authors will starve to death and civilization will end.

On 31 march 2000, a petition organized by Jérôme Lindon (editor) requesting that public libraries respect the right of authors to stop free lending was signed by 288 authors and published in Liberation.

35 millions voters are called to choose deputies for the 467 remaining seats after 45.5% of voters choosed the right against 39% for the left. 109 seats already went to the right with only 1 for the left.

933 candidates are competing. 2 left candidate are sure to be elected since they're alone after "desistements". Only one place has three candidate ("triangulaire").

Who pays more tax relative to revenue in the UK, first decile of income or last decile?

Nicolas Sarkozy won by +3.06%, it is thus clear that this advantage amongst the elder and retired vote is the source of the victory and by far.

Retired voters represent about 30% of the voters (my estimate interpolated from 2004 data below).

Share of retired voters will increase with time, what will be the consequence on future politics?

From the diaries - whataboutbob
Comments >> (78 comments)

No mention of the recent World Bank scandal.

But the best part is the last sentence of Le Monde article:


Translation of the bold part: "(Venezuela) economy is paralyzed by a 12% inflation".

The KSR ruling is IMHO a common-sense law-and-economics analysis of the extraordinary bending of patent law by CAFC, USPTO and corrupt attorneys on the "non-obviousness" criteria. The KSR court ruling is unanimous and by far the most talked about. I'm saying "law-and-economics" because the court is citing "market forces" many times in its ruling, and remind everyone that a patent regime that is blocking progress is unconstitutionnal.

promoted to the FP by tsp... check out the comments for lots more...

There was recently a trade agreement between the EU and the USA for air travel. Here is what I can read in the press:

[...] British Airways CEO Willie Walsh, however, said Britain had to stand by its pledge to withdraw traffic rights if the U.S. did not open up to EU airlines. He claimed the EU had already given away its most valuable negotiating asset by opening up Heathrow.

"So far the U.S. has made no meaningful concessions," he said. "American carriers can now fly into Heathrow, Europe and beyond while their own backyard remains a no-go area for EU carriers and foreign ownership of their airlines remains unchanged."

U.S. carriers, for example, will now be able to fly from New York to London, where they can pick up passengers and fly on to Stockholm -- offering competition on trips within the EU. But EU airlines will still not be able to operate domestic American routes.[...]

I can't resist to post a big chunk of this  nice piece by perma-bear Nouriel Roubini:

Now even mainstream media and mainstream analysts regularly speak of the sub-prime "meltdown" or "carnage" and refer to these sub-prime mortgages as "garbage" or "trash". Since most of these sub-prime mortgages were junk that should have never been originated in the first place, now the new spin in financial markets is to minimize the nature of the problem by making two arguments: first, sub-prime loans are only a very small fraction of the housing market, specifically only 6% of it; second, sub-prime problems are a niche problem that is not affecting other parts of the mortgage market. Both arguments are utter spin without any basis. Let us see why.

Where did the Mortgage Bankers Association (MBA) get the "sub-prime is only 6%" figure that it is spinning around in every possible media?

The joys of employee ownership

For Chris Dillow and other advocates of employee ownership, the last few days have been heady indeed. On Saturday it was revealed that the boards of the UK's two biggest co-operatives have agreed the terms of a merger that would form the world's largest consumer co-operative group, with a combined workforce of more than 87,000 staff and more than 4,500 sites. On Sunday The Observer reported that John Lewis plans massive expansion:

John Lewis Partnership is embarking on a highly aggressive expansion strategy which will see the employee-owned business create 35,000 new jobs and double its turnover to £12bn. ...A 10-year business plan, signed off by the partnership board in recent days, will see the retail concern boost its total workforce to 100,000 by 2017. The plan envisages John Lewis significantly increasing its 26 department stores and 184 Waitrose supermarkets.
[...]

Markets Are Not Magic - by Mark Thoma

An excellent post by Mark Thoma at Economist View which I'm sure is very close to ET'ers opinions:

To listen to some commentators is to believe that markets are the solution to all of our problems. Health care not working? Bring in the private sector. Need to rebuild a war-torn country? Send in the private contractors. Emergency relief after earthquakes, hurricanes, and tornadoes? Wal-Mart with a contract is the answer.

Whatever the problem, the private sector - markets and their magic - beats government every time. Or so we are told. But this is misplaced faith in markets. There is nothing special about markets per se - they can perform very badly in some circumstances. It is competitive markets that are magic, though even then we have to remember that markets have no concern whatsoever with equity, only efficiency, and sometimes equity can be an overriding concern.
[...]

Last sunday I asked about where to find some documents related to the European Parliament.

I just got the response to my question adressed to Europe Direct. 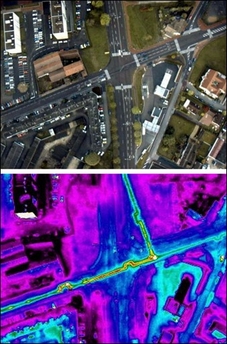 A few monthes ago I asked various economists, including Bernard Salanié (see comments) why the administrations computing inflation didn't make their raw price data available since it would end conspiracy theories, endless debates about the magic "global" inflation number and provide quite useful data to taxpayers who all have different perspectives on inflation : yound, couple with or without children, old or retired face very different inflation, different regions face different prices level and inflation, etc...

The near unanimous answer (see the comments in the link above) was that data can't be released otherwise store owners would change their price behaviour (and that I didn't know anything about economics, etc... nothing unexpected).

After a while, encouraged by Max Sawicki who told me honnestly not knowing the reason and that Bureau of Labor Statistics (BLS) people were nice people, I decided to fire a few emails.

Your take on today's news media