Monday BYD (Buffet has 10% of the company) will start to produce the first mass produced plug-in hybrid.

New York Times Said it charges fully in 7 hours, and at special stations, can be charged halfway in 10 minutes.It also has a 1.0 litre gas engine that is used to recharge the batteries when a power outlet isn't nearby.

Chinese automakers still lagged behind Western companies in conventional car technologies, but were at a similar level when it came to hybrids.

"The Chinese manufacturers have the opportunity to leapfrog the traditional technologies and to gain a leading position in terms of new energy cars," he said.

I want to share as this video is one of the most impressive social experiment I have seen so far.

I find it news worthy :

I hope that our honorable eurotrib physicists could add some details (hoax?).
some more here http://newenergytimes.com/news/2008/29img/Arata-Demo.htm
and in Jap :
http://www.jstage.jst.go.jp/article/jhts/33/3/33_142/_article

This concept of Wind turbines look quite promising and is going to be build in China this year. perhaps Jerome has more information /debunk on this. The wind dam would be located over a gorge at Lake Ladoga in north-west Russia.

Can saltwater be burned as fuel?

n 20,000 Leagues Under the Sea, Nemo describes how the Nautilus is powered by sea water...

"Professor," said Captain Nemo, "my electricity is not everybody's.
You know what sea-water is composed of. In a thousand grammes are found 96 1/2 per cent. of water, and about 2 2/3 per cent. of chloride of sodium; then, in a smaller quantity, chlorides of magnesium and of potassium, bromide of magnesium, sulphate of magnesia,
sulphate and carbonate of lime. You see, then, that chloride of sodium forms a large part of it. So it is this sodium that I extract from the sea-water, and of which I compose my ingredients.
I owe all to the ocean; it produces electricity, and electricity gives heat, light, motion, and, in a word, life to the Nautilus."

A guy has just discovered by accident how to burn salt water (strangely the flame seems to be yellow (sodium?) in the video, not blue like hydrogen does) by simply applying some RF to it.

A dream that comes true : Getting energy from sea water

Congratulation HID :$50 limit has been broken

I just want to congratulate HiD for his diary Countdown to $50 Oil ;-)

WASHINGTON (AP) -- Iran is suffering a staggering decline in revenue from its oil exports, and if the trend continues income could disappear by 2015, a National Academy of Sciences analysis found.

Iran's economic woes could make the country unstable and vulnerable, with its oil industry crippled, Roger Stern, an economic geographer at Johns Hopkins University, wrote in the report published Monday.

Iran earns about $50 billion a year in oil exports.

The decline is estimated at 10 to 12 percent annually.

It is just about nice education love and humanity

Mates, how your investments are going ?

As you know the sharesmarket is glomming and there are probably more "surprises" down the road.

from crooks and liars :

"A "trophy" video appearing to show security guards in Baghdad randomly shooting Iraqi civilians has sparked two investigations after it was posted on the internet, the Sunday Telegraph can reveal."

i am getting tired about all these oil peak gas peak, and the worst is coming (at least for me, chocolate is my main energy) : Chocolate peak

the NY has an interesting story about a british inventor who created an device that produce a high frequency sound  that can be eared only by people younger than 20, and is a prefect repellent.


The device, called the Mosquito ("It's small and annoying," Mr. Stapleton said), emits a high-frequency pulsing sound that, he says, can be heard by mostpeople younger than 20 and almost no one older than 30. The sound is designed to so irritate young people that after several minutes, they cannot stand it and go away. 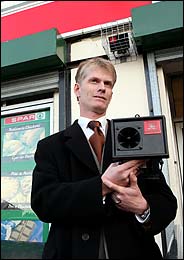 Are we going to an anti-youth society ?

I do not have the time to set a website tonight but i think i would be a good idea to think those who had the courage to listen the common sense of their citizens and keep europe on track.

Now perhaps can we think about what kind of europe do we want and where are the frontiers without see the debat hijacked by the silly Turkish accession.

if we decide that the Bristish view of Europe, an UN bis/or just free-market without frontiers, is what we want, then Turkey will be welcome.

Some pictures from the 'heroes' [WARNING - VERY GRAPHIC]


Edit and warning by Jerome. I have pushed the pictures below the fold. They are extremely graphic, so don't go there if you are not ready to watch that.

I already made some comments on eurotrib about Turkey membership in Europe :

For this moment i am absolutely opposed to it, not because i am racist, not because i do not like turkey (i like this country and i crossed it until Syria) but because i strongly fell than it does not make sense for the Europe i dream, the identity i want, affinity i need.

I do not accept without support the strange idea that this membership can solve an hypothetical clash of civilization and i do not believe that i must be the purpose and burden of Europe (as organisation).

I want you opinion about it and post this article that sound right for me, as bloody french.