Fear not! Berlusconi's former Minister for Foreign Affairs (and Intelligence and Security Services) is looking out for us! Franco Frattini, European Commissioner for Justice, Freedom and Security has proposed wide-ranging new border-checks and surveillance mechanisms:

The proposals for a radical shake-up of the EU's border security were unveiled by Mr Frattini in Brussels.

He said the measures would apply to all 24 members of the Schengen accord, and it was up to countries such as the UK and Ireland whether to join in.
Link

Frattini told reporters the bloc should use "the most advanced technology to reach the highest level of security."

"We Europeans are now obliged to put our fingerprints in our passports," he said. "It's very strange that I don't oblige third (non-EU) country nationals to put their fingerprints either in documents like a visa or another register."

Klaus-Gerhard Zumwinkel was dismissed as CEO of the German Postal Service after a razzia due to suspected tax evasion of one million Euros last Thursday. Now the German news-site Spiegel.de reports that the most recent issue of the Postal Service's internal newspaper - published and distributed to 400,000 current and former staff on Wednesday - features an article entitled: "Executives are Role Models".

A key element for making the petition successful is to take active steps to sustain and accelerate the momentum of media coverage which will both inform people about the existence of the petition, legitimate it as a large and serious effort and in turn generate more coverage.

A good way to generate media coverage is to collect email-addresses of newsmedia in this thread and have Eurotrib readers write emails and send them off to all outlets of the same language. There are two benefits to this: Firstly, most people are more likely to fire off a short email if they don't have to look up email addresses first. Secondly, locals and nationals of certain regions and countries have a much better knowledge about which media outlets are worth contacting because they have large and possibly sympathetic audiences and/or are most likely to be responsive.

Nuclear Attack on Czech Republic (not)

I can only find a German language source at the moment. As can be seen in the video below, Czech artists somehow managed to insert very realistic looking footage of a nuclear attack into a early-morning, uncommented landscape program of the public channel CT2.

Apparently they caused quite a bit of panic.

I cannot quite fathom how anyone could think this is a good idea. Indeed, I think it could do permanent damage to the EU:

Tony Blair, the British prime minister, could end up swapping Downing Street for a job as the first full-time European Union president, under a plan being actively touted by Nicolas Sarkozy, the French president.

It would, justifiably so, reinforce the stereotype of the EU as an out of touch, morally degraded institution. Even if to a large extent a representative function, it would permanently stain the office with Blair's past and present warmongering. It would also do precisely nothing to make the EU more popular with the Brits - on the contrary. Nor would it be helpful in international relations, much less once Bush leaves office.

Thankfully, there is still reason to hope that this will never actually happen.

Ninety-nine days after the general elections in October 2006, Social Democrats (SPÖ) and Conservatives (ÖVP) have agreed to form a 'grand coalition' government headed by the SPÖ's Alfred Gusenbauer as the new Federal Chancellor.

Wolfgang Schüssel on the left, Alfred Gusenbauer on the right

Updates at the Bottom of the diary

Update Austria 2: Edging towards a Great Coalition after all

Shortly after the recent Austrian general elections on 1. October 2006 I posted this diary entry, giving an overview of the results (the Social Democrats, SPÖ, won by a tiny margin over the governing Conservatives, ÖVP) and arguing that new elections seemed likely because neither Social Democrats nor the Conservatives could find enough small partners to form a governing coalition, and the hostility between the two big parties made a "Great Coalition" look rather unlikely. Now, however, a Great Coalition seems likely to emerge after all.

US Ambassador says Guantanamo cannot be closed immediately because...

I was somewhat taken aback when the current Ambassador of the United States to Austria, Susan McCaw, replied to a question of whether the United States are actually going to close Guantanamo anytime soon (as Bush had suggested rather disingenously in a recent visit to Vienna):

"As I have just explained, we will need to work in cooperation with other countries [to shut Guantanamo down]. Many of the remaining prisoners come from countries in which they would probably be tortured if we simply sent them back. [My Translation]

She then reaffirmed this line answering a similar question:

"The United States has been very pro-active to ensure that prisoners are only sent back to countries in which they are not being tortured." [My Translation]

This strikes me not only as very hypocritical given the recent U.S. record regarding torture, but also as extremely disingenous. The U.S. would certainly have the means to secure the safety of the remaining prisoners should it really want to do so and I wonder how credible this concern is in any case. Similarly, claiming that

"It will take international cooperation to close Guantanamo."

clearly deflects from the main issue which is the lack of political will to do so in the United States.

Well, I wouldn't want to read too much into this. I often find interviews with diplomats who work in Embassies or at international institutions frustrating, because their representational duties prevent them from revealing anything interesting and often result in the parroting of the most worn out talking points. As she herself said at the end of the interview:

"I was disappointed by the negative opinion many Austrians have about President Bush. I see it as part of my duty to explain his positive message." [My translation]

It is notable, though, that she would be so insensitive as to actually argue that one reason Guantanamo cannot be closed immediately is that the U.S. are concerned about the possible torture of repatriated detainees. It reveals either a deeply held conviction of inherent U.S. goodness which somehow gives U.S. torture a positive quality, or her contempt for the European public which is supposed to swallow these arguments.

As a side note, public internet interviews don't seem to be a very good forum. It is usually almost impossible to ask follow-up questions which allows the interviewee to get away with talking points and falsities. 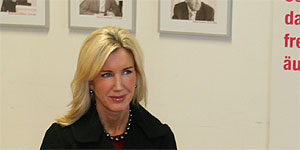 This is just a brief update about the political situation in your favourite alpine EU state (mine anyway), where new elections seem increasingly likely:

As some of you may recall, the recent elections on 1. October 2006 led to major losses of the governing Christian conservative "People's Party" (ÖVP) which fell from over 40% to slightly over 34% and came in second behind the Social Democrats (SPÖ) who also lost but much less [see details in this diary and this comment on ET _DoDo]. The Green Party made the third place for the first time in their history, but with only some 500 (!) votes before the resurgent new Freedom Party (FPÖ) under its new, perpetually smirking xenophobe and anti-EU leader Strache. On the fourth place the ÖVP's late coalition partner, the BZÖ (the more opportunistic splinter of the old Freedom Party) just made it into parliament.