'You look different with your clothes on!'

Jérôme à Paris, respected French energy blogger and aspiring adult novelist, quipped to Plutonium Page "You look different with your clothes on," to which her husband Frank answered "In your dreams, Frenchman!"

As the evening went on, things got more and more interesting.  Turn the page...

Secret prisons, the EU, and a very strong warning

From the front page (slight edit to push some text below the fold). We have to keep this story alive and screaming, and encourage European politicians to push these inquiries to the end.

(Cross-posted from The Next Hurrah.)

Little by little, over the last year or so, we've begun to learn the extent of the Bush administration's War on TerrorTM as waged by the CIA.  I'm not referring to something they'd put on their website.  I'm talking about "extraordinary rendition", the practice of transferring terrorism suspects to interrogation camps, often in countries where torture is legal.

(Also posted at The Next Hurrah.)

In December 2002, Iraq provided the UN with a list of 500 of their weapons scientists.  These were scientists from Saddam's former chemical, biological and (fledgling) nuclear weapons programs.  None of the programs were active in 2002, but the scientists remained.  Congress recognized that they were a potential source of intelligence;  on March 21, 2003, the Senate unanimously passed the Iraqi Scientists Immigration Act, which gave amnesty to Iraqi WMD scientists in exchange for information.

However, thanks to Bush's impatience, all hell had already broken loose in Iraq, and any remaining WMD scientists were in "fear [of] being taken prisoner by US forces, retaliation by Saddam loyalists, or kidnap and ransom to coalition authorities." (Nature, 22 May 2003, subscription only.)

So, the Iraq Survey Group's investigation into Iraq's (nonexistent) WMDs continued.  On October 2, 2003, Dr. David Kay gave a statement before the House and Senate Intelligence Committees.  He ended his testimony with a blunt warning:

Second, we have found people, technical information and illicit procurement networks that if allowed to flow to other countries and regions could accelerate global proliferation. Even in the area of actual weapons there is no doubt that Iraq had at one time chemical and biological weapons. Even if there were only a remote possibility that these pre-1991 weapons still exist, we have an obligation to American troops who are now there and the Iraqi population to ensure that none of these remain to be used against them in the ongoing insurgency activity.

This warning wasn't lost on certain members of Congress, who, in December 2003,  drafted a letter to then-National Security Advisor Condoleeza Rice regarding Iraqi weapons scientists:

We are writing to call your attention to what we believe has been a serious and dangerous oversight in the Administration's planning for Operation Iraqi Freedom and the post-war period. Although hundreds of millions of dollars have been spent in searching for weapons of mass destruction, we understand that the Administration has only recently begun contemplating efforts to keep Iraq's weapons scientists - who may be the only extant element of an Iraqi unconventional weapons program - from putting their knowledge to use elsewhere.

So where are the scientists?  Some have been assassinated;  some may have gone into hiding.  Some are in U.S. custody.  And many are still missing.

(Also posted at The Next Hurrah)

Last week, the Bush administration announced the nomination of California billionaire Roland Arnall as the U.S. ambassador to the Netherlands.  So who is this guy?  Why did Bush choose him?

Well, let's take a look at Dutch news, first.  There will probably be a more detailed article in de Volkskrant (a Dutch newspaper) soon, but here's the translation of a brief online news update:

The intended ambassador for the US in the Netherlands, Arnall, has been sued in the US by customers of his mortgage company. The customers demand money, because Arnalls company provided them with loans they could not afford, and with a higher interest rate than was agreed upon.

Tens of thousands of Americans in 30 states started proceedings against Arnalls company, Ameriquest.

The 65-year old billionaire is a friend of president Bush, and put a lot of money in his election campaign. The senate must still approve his appointment.

Well, that gets right to the point.  What are this guy's qualifications?

(Cross-posted at The Next Hurrah.)

Look to the Arctic to see the effects of the real global threat:  climate change.

The following images were generated by the NASA - Goddard Space Flight Center Scientific Visualization Studio.  They illustrate the receding ice in Greenland.  Click each image to enlarge it.

From left to right: color scale (cm/year receding), and the east coast of Greenland. Now, courtesy of the ASTER science team/U. of Maine, this is the Kangerdlugssuaq glacier in Greenland.  It is moving three times faster than it was in 1996, because it is melting.  The dotted yellow line is where the glacier ends today.

And now for a story to go with the pictures.  It has to do with those damned Greenpeace terrorists, and what they've been up to.  Their latest act of terrorism:  a trip to the Arctic, accompanied by scientists from the U. of Maine Climate Change Institute, to determine how fast some of the glaciers are melting.

Back in 2003, Europe was hit by a serious heat wave, along with a terrible drought.  19,000 people died, and the drought created a crisis for farmers' livestock and crops.

France is facing its worst water shortage since 1976, with rivers drying up, reservoirs struggling to meet demand, and rationing measures introduced in the most severely hit areas.

In some regions water levels are at their lowest for 54 years after nine months of exceptionally dry weather and up to 60% less rainfall than normal.

Farmers say their crops are at risk. Restrictions on irrigating fields, introduced in 50 of the country's 95 departments, are already hitting cereal production, according to agriculture specialists.

Teams of "water police" have been patrolling farming areas to enforce the restrictions on irrigation and handing out fines of up to €1,500 (£1,000). But faced with losing their crops many farmers are prepared to risk being caught.

I'm from New Mexico, and we're used to "water police";  I've never heard of this happening in Europe, but I'll leave it to Jérôme and other Europeans to answer that question.

I know there have been a number of "introduce yourself" diaries here, but since today's Independence Day in the U.S., I thought I'd invite all the American expats here at EuroTrib to tell a little about yourself (or a lot, it's up to you).  This is sort of a roll-call as well.

Also, if you're American and you're visiting EuroTrib, please comment as well.

Since when did the Bush administration care about global warming?

(Cross-posted at The Next Hurrah).

To put it simply, what the hell?  From the Guardian:

A historic deal on climate change which would see the US sign up to cut greenhouse gas emissions was last night emerging after a day of frantic negotiations ahead of the G8 summit.

The draft text hammered out by officials meeting in London is expected to pledge the world's richest countries to wean themselves off fossil fuels - not just to save the planet, but to prevent a worldwide energy crisis.

An action plan to be unveiled at the Gleneagles summit this week will centre on a package to clean up land and air transport, and provide green technology to developing countries through a deal brokered by the World Bank.

The first hope of a breakthrough came yesterday as the White House finally conceded that human activity was at least the partial cause of global warming.

promoted from the diaries by Jerome. 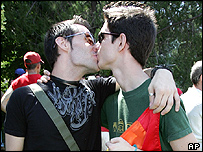 This is so cool:

Spain's lower house of parliament has voted in favour of allowing gay couples to marry and adopt children.